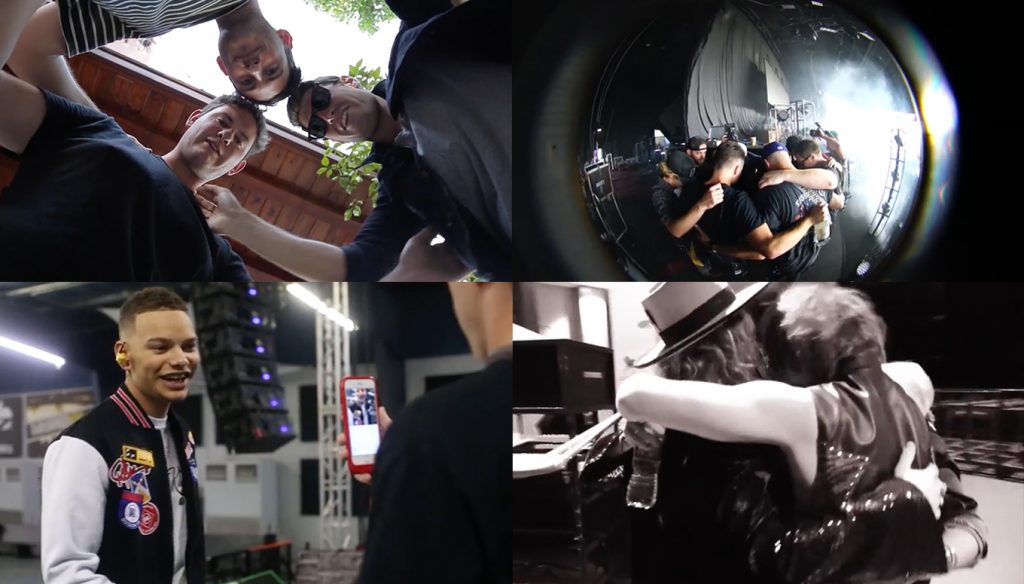 We’re definitely pleased with the results: from Kane Brown’s acoustic performance of “Thunder in the Rain” to The Struts’ behind-the-scenes look at Lollapalooza this year, these rising artists let us in on their songs and their lives.

We’d like to give thanks to our Fall 2016 New Music Favorites and let you see what they’ve recorded for you.

Also, stay tuned: Ticketmaster New Music Favorites will be back in January 2017 with behind-the-scenes access, new music and artist exclusives from a new group of excellent rising acts.

The acoustic rendition of “Thunder in the Rain,” breaks down Kane Brown’s country hit to its core: an intimate, moving song about the unstoppable nature of love. After beginning with tambourine and smooth acoustic guitar, Brown launches into the 2016 single in his warm baritone. “You’re fire, I’m lightning / We’re burning at the core,” croons Brown on the chorus. “Falling and crashing / Girl we’re a perfect storm.”

“Thunder In The Rain” comes off of Brown’s self-titled debut album, which topped the Billboard Country charts. And the passionate, brooding song has become one of Brown’s go-to singles to perform live. “I found it in a magazine,” explains Brown to Ticketmaster Insider about the inspiration for the song. “Pretty much we took it in the studio and we wrote about two unstoppable forces that would never come in between a relationship and you get ‘Thunder in the Rain.’”

Despite Tucker Beathard’s youthful antics, the rising country star sings with heartfelt introspection. That quickly becomes clear on Ticketmaster Insider’s exclusive compilation video for “Momma and Jesus,” which ties together the rebellious song with visuals of the 21 year-old performing the song and hanging with his band.

The importance of Beathard’s band, which he calls a group of “hard working Mississippi boys,” can’t be understated. This video depicts the group of them taking a shot together before a show, playing football together to blow off steam and practicing (among other things). “We’re just kind of all chasing a dreaming together,” says Beathard to Ticketmaster Insider, “and it’s cool ‘cause yeah, I’m ‘Tucker Beathard,’ that’s what we’re called but it feels like a band playing on stage with them.”

It’s certainly a big step up from their first show at a small club in Brooklyn. “We were not that good,” says Jared Stenz to Ticketmaster Insider. “It was fun, but uh, we just weren’t that great.”

“You can go, you can go it alone,” sings Schneid on the song, “you can make it on your own.” Considering their momentum — an appearance at SXSW in 2017 (and Schneid’s pretty impressive jump kick at the end of this video) — we’re certain that they’re taking their own advice.

In 2016, America embraced The Struts. Ticketmaster Insider briefly caught up with the U.K. glam rockers over the summer at Lollapalooza in Chicago, where they performed to huge crowds on the festival stage. The gig was part of their third U.S. tour, in which they traveled across the country in a van. “We were pleasantly surprised to see how keen the people are to see us,” says bassist Jed Elliott to Ticketmaster Insider.

From the group’s raucous stage presence to their boozy off-stage hangs, these exclusive photos show it all. And don’t worry if you missed them this year: we’re pretty sure that the four Brits who have opened for The Rolling Stones, Mötley Crüe and Guns N’ Roses will be back stateside before too long.

Fans have lots of questions for Minnesota-bred a cappella crooners Home Free. That’s why we joined them during their VIP Q&A session in Nashville during their sold-out Christmas tour this month. The five-member group talked about making songs in the studio, their relationship with their label Sony, choosing which songs to record and, simply, living the dream. At the end, there’s even an exclusive performance of Beach Boys’ “Little Saint Nick” to put you in the Christmas spirit.

For those new to Home Free (and a cappella), the 2013 The Sing-Off winners want fans to understand how the genre works. “The most obvious common misconception that people have about a cappella is that there’s instruments playing,” explains Adam Rupp to Ticketmaster Insider.

“They just don’t believe that it’s all being produced by the human voice. It’s not ’til usually the drum solo that it actually dawns on them that hey, this is actually being made live and there’s no special effects happening.”