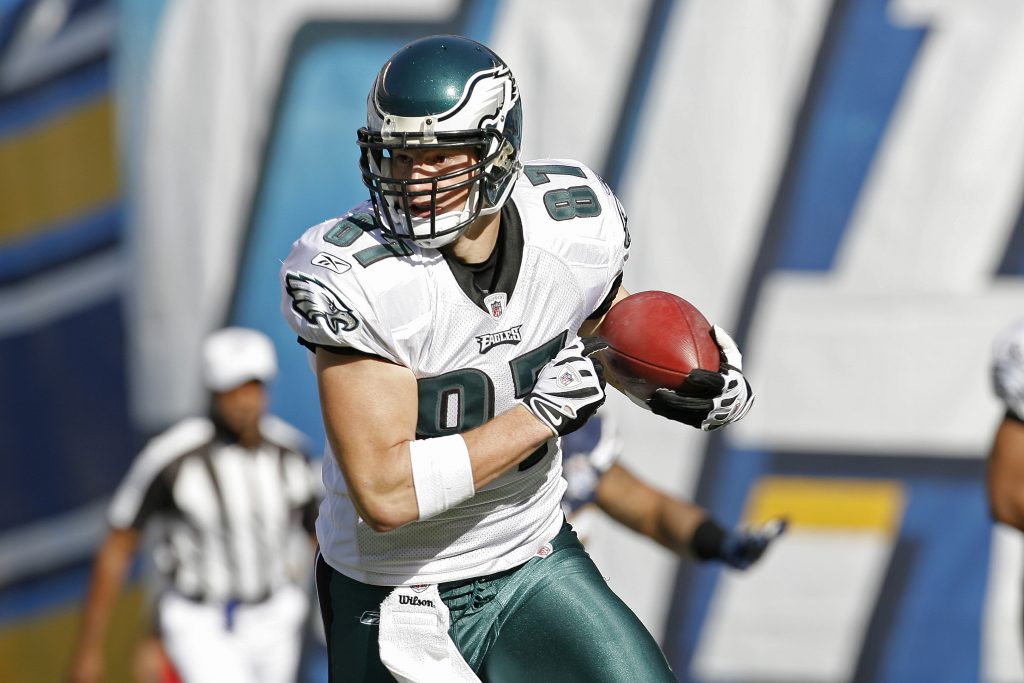 If there is one thing Super Bowl-winning tight end Brent Celek wants everyone to know about Philadelphia sports fans, it’s that they’re fiercely loyal. That much was clear during our visit to the City of Brotherly Love during Fantennial Weekend this year, when Ticketmaster was on the ground to celebrate with Celek and some of the city’s biggest Eagles fans before and after they took on the Lions at Lincoln Financial Field.

During our time with Celek, he answered a Ticketmaster 10 interview and regularly had to stop to thank fans for shouting their gratitude as they passed by —”thanks for everything, Brent!” There’s that loyalty he was talking about. In between high-fiving faithful fans, the former Eagle talked to us about his tenure with the team, his pregame rituals, what it was like to win a Super Bowl and the best part about about getting be a fan of his team. Check out our full conversation below in our latest Ticketmaster 10 interview.

I think the 2017 Super Bowl victory was something that changed the city forever. To be able to be a part of that team to do that; I think it was so special. It really meant everything to me and allowed me to retire without looking back.

2. What was the first thing you did after the Super Bowl?

Right after the Super Bowl, we went to the after party. I had a few drinks — but not too many — and honestly went back to the hotel and slept all night. One of the best sleeps I’ve had in a long time.

3. What’s the best place to have a Philly cheesesteak in Philadelphia?

Jim’s Steaks is the best place in Philly. For the last 11 years, they’ve been my favorite.

4. If you could have dinner with any Eagles player in history, who would it be?

Reggie White. He was so dominant, and I heard he was such a great guy. I would have loved to have met him and had dinner with him.

5. Who was a football player that inspired you as a kid?

Jerome Bettis was a player that inspired me. Just the way he ran the ball, how hard he played, how physical he was. He was an idol of mine.

6. Who do you think is the most talented tight end in the league right now?

I’d say it’s between Travis Kelce and Zach Ertz. Both of those guys are beasts. They do special things in the pass game, and they both can run blocks. Kelce and Ertz. It’s a tie.

“Nothing compares to being at a football game. I love the energy at the stadium — that’s why I still come to the games.”

7. Now that you’ve retired, have you picked up any new hobbies?

I like jet skiing. Riding my Sea-Doos — I love that. That’s time where I can just get away and not think about anything.

8. Do you have song or artist that you’re playing on repeat right now?

There’s a song called “Ride It” by Regard. I’m the type of person that listens to a song a thousand times until I’m tired of it, and however long I listen to it is how I gauge how good of a song it is. I’m still listening to “Ride It” by Regard. I don’t know when it’s going to burn out for me.

9. Can you describe the excitement and energy of being at an NFL game live?

Nothing compares to being at a football game. It’s the greatest energy ever. Obviously I was on the field for a lot of my career, but now that I’m a fan, I love the energy of the stadium. That’s why I still come to the games.

10. What is the best thing about Philadelphia sports fans?

Philly sports fans are loyal. I come from a town in Cincinnati where if the team loses, people don’t go to the game. In Philly, they come to the game. They may be booing, but it’s only because they care. I love them. I’m one of them now.