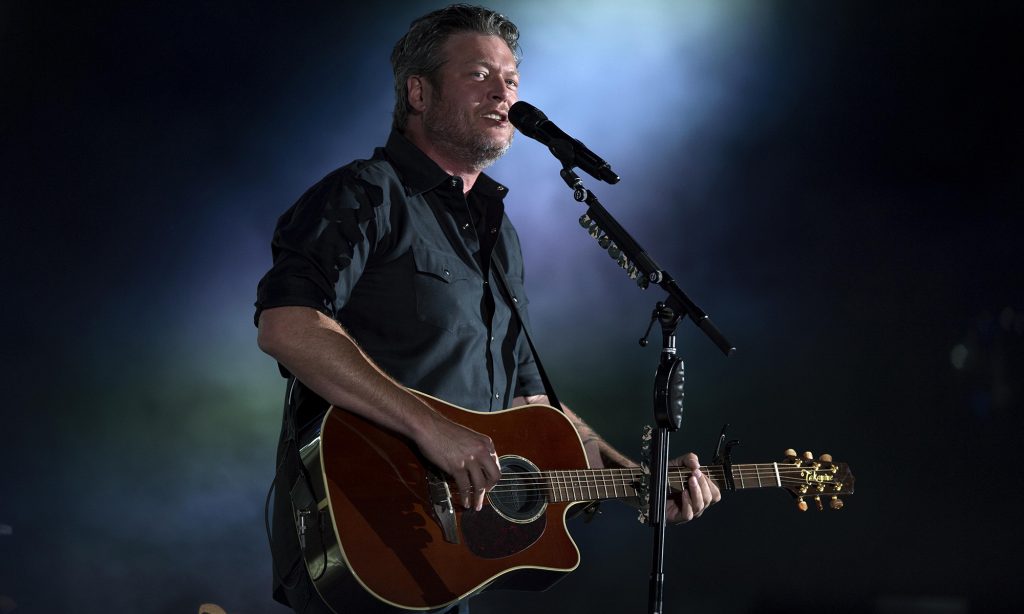 As music superstars continue figuring out the model for post-pandemic performance, Blake Shelton followed the example set by Garth Brooks‘s June 27 drive-in concert, unleashing an outdoor, on-screen event of his own on July 25. Presented by Encore Drive-In Nights, Shelton’s exclusive, one-night-only show was streamed to 278 North American theaters, and instead of going it alone, he decided to make it a full-on party. In addition to an opening set by country quartet Parmalee, Shelton mixed things up by bringing along special guests Gwen Stefani (of course, Shelton and Stefani form one of music’s coolest pan-genre power couples) and Trace Adkins, both of whom recreated their hit duets with Shelton in concert.

Stefani stepped out on her own for a couple of tunes, and also joined Shelton on their recently recorded duets “Nobody But You” and “Happy Anywhere,” while Adkins grabbed a mic to sing along on “Hell Right” and “Hillbilly Bone” and belt out his own smash “Honky Tonk Badonkadonk.” But Shelton fans still got a heaping helping of their hero’s tunes, including songs from his early days like “Austin” and “Some Beach” as well as more recent hits like “Every Time I Hear That Song” and “I’ll Name the Dogs,” and in between, the man told plenty of stories about himself and his music.

We chatted with some fans who weren’t about to let the unorthodox setting stop them from having a Blake Shelton concert experience, and they shared their thoughts on the event.

Marcia Cameron caught the concert at the Vintage Drive-In in Avon, NY, and found an upside to the socially distanced setting. “I appreciated the fact that we weren’t all on top of each other,” she said. “Blake was awesome, playing new and old hits, and Trace Adkins and Gwen added the right touch to the experience, as well as the opening band [Parmalee].” Cameron says she’s eager for more drive-in shows. “I enjoyed the whole experience very much,” she said, “and have decided this is the way to go for this lady as I don’t really enjoy being in a crowd.”

Cynthia Holliday hit the Holiday Auto Theatre (no relation) in Hamilton, OH with a big group, and they enjoyed having plenty of real estate to spread out. “It’s great to see a concert like that,” she said. “There isn’t a bad seat in the house! He told stories and talked directly to the crowd. It was a true concert! I think being able to see three great performers in such a relaxed, safe way was fantastic! This was a way for their fans to enjoy live music… and we got to do it under the stars!”

Laurel Stewart made it to Sacramento’s West Wind Sacramento 6 Drive-In and loved the opportunity to keep the tailgate-party vibe going all the way through the concert. “We brought our kids,” she says, “and it was something we wouldn’t have otherwise done had we had to make it through the crowds of people to find seats or get snacks, etc. The performers themselves did a great job addressing the crowd.”

“We made it a party! When the concert started, we were able to get up and dance and holler and sing along.“

Up in Canada, Blair Stepp saw the show at The Prairie Dog Drive-In Theatre in Saskatchewan. While he misses the kind of interaction you’d get with both the artists and other concertgoers in a conventional concert venue, he nevertheless ended up a convert to the setting. “I have to say it was very good,” he says. “It was a different and unique experience to have to go to a concert at a drive-in, but it does give entertainment through these changing times with COVID and all the restrictions. It was well done, and I would go see another drive-in concert if there are going to be more.”

Tonight’s the night y’all! @encoredriveinnights presents Blake Shelton! We had a ton of fun making this for y’all. Here’s a sneak peek of @gwenstefani and Blake performing their new single, “Happy Anywhere.” Stay safe & have fun! – Team BS #BlakeAtTheDriveIn

Down in Southaven, Mississippi, at the Landers Center, Polly Speed was in serious need of a rescue from the lockdown doldrums after the pandemic wreaked havoc on her spring and summer concert plans. “I am an avid country concert fan,” she says. “After numerous concerts on my calendar being postponed or canceled, I figured I’d better get used to it.”

But when she heard about the Shelton show, her curiosity was piqued. “We gathered a few friends together,” she says. “We all brought finger food to share, along with coolers and lawn chairs. We made it a party! When the concert started, we were able to get up and dance and holler and sing along! It wasn’t like a live concert, but it was the closest we’ve been to one in several months!! We had so much fun. I love when [Adkins] and Blake interact with each other. The whole show was amazing!! Speaking for myself and my friends, please, let’s do another one real soon!”