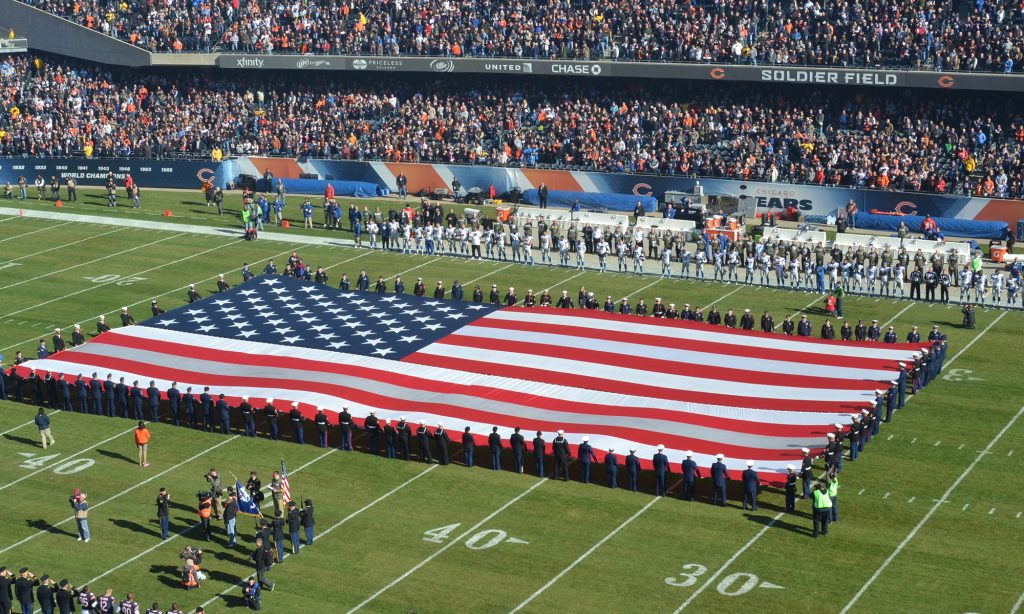 Honoring our nation’s troops has long been a tradition of the U.S.’s major sports franchises and leagues. The NHL, MLB, NBA, NFL and even college athletics programs all have made Military Appreciation Nights a part of their traditions, turning out to celebrate the early November Veteran’s Day holiday as well as Memorial Day in late May. Those celebrations are filled with heart and sincere gratitude, and typically include things like discounted admission for members of the military, meet-and-greets between athletes and service people, displays of military vehicles for fans to explore, and invitations for veterans to stand and enjoy a hearty round of applause. And there’s that most heart rate-stoking, eardrum-popping display known as the military flyover that always fills crowds with joy.

Off the fields and courts, sports organizations have participated in programs such as the NBA’s Hoops for Troops, where past and present players coordinated events nationwide to honor active and retired military personnel, or the NFL’s Huddle for Heroes campaign, during which the league encouraged fans to write letters of support to members of the military who sacrifice so much of their time with their loved ones in order to serve. NHL teams the Carolina Hurricanes and the Washington Capitals have auctioned off autographed jerseys and donated a portion of the proceeds to the USO of North Carolina and the Tragedy Assistance Program for Survivors, respectively.

But in the hallowed venues where sports contests take place, this year isn’t the same as most years — in November 2020, there aren’t stadiums packed with happy fans to rise and cheer en masse when the folks in uniform appear on the field or the fighter jets shriek past overhead. The world of sports is proving to have an undimmed commitment to giving the military its due nevertheless.

ESPN dedicated the week beginning November 7 to an America’s Heroes Tribute. Each morning’s First Take includes a visit to a base from a different one of the military’s five branches, and SportsCenter planned numerous features highlighting the bravery and determination of members of the military.

FOX NFL Sunday dedicated itself to a Veterans Day Special on November 7 that featured a visit to Miramar, the Marine Corps Air Station in San Diego. With his fan-stoking skills on full display, Jay Glazer expressed excitement and gratitude to the Marines arrayed around him — all of them masked up, of course, except for the bandmembers playing wind and brass instruments.

Individual sports teams find all kinds of ways to show their support for the military as well. The NFL’s Jacksonville Jaguars held their Salute to Service ceremonies on November 8, during a game against the Houston Texans. Even though there was reduced capacity at TIAA Bank Field, the Jaguars offered complimentary tickets to more than 3,000 active duty, retired and reservist military personnel and their families. And the Jaguars have put tons of energy into offering a tangible form of support as well, with the Jaguars Foundation and the City of Jacksonville’s Military Affairs and Veterans Department together awarding $57,500 to military and veteran-serving organizations throughout the community.

And the commitment and support originates with individuals, too. Pro football players who have themselves been enlisted — such as the Steelers‘ Alejandro Villanueva and the Patriots‘ Joe Cardona — proudly celebrate their affiliations with both entities. And on November 11, former NFL quarterback and current ESPN commentator Jesse Palmer will host the Wounded Warrior Project’s Veterans Day Event, which will be available on the WWP’s YouTube channel.

He's staying focused on driving himself toward his goals.