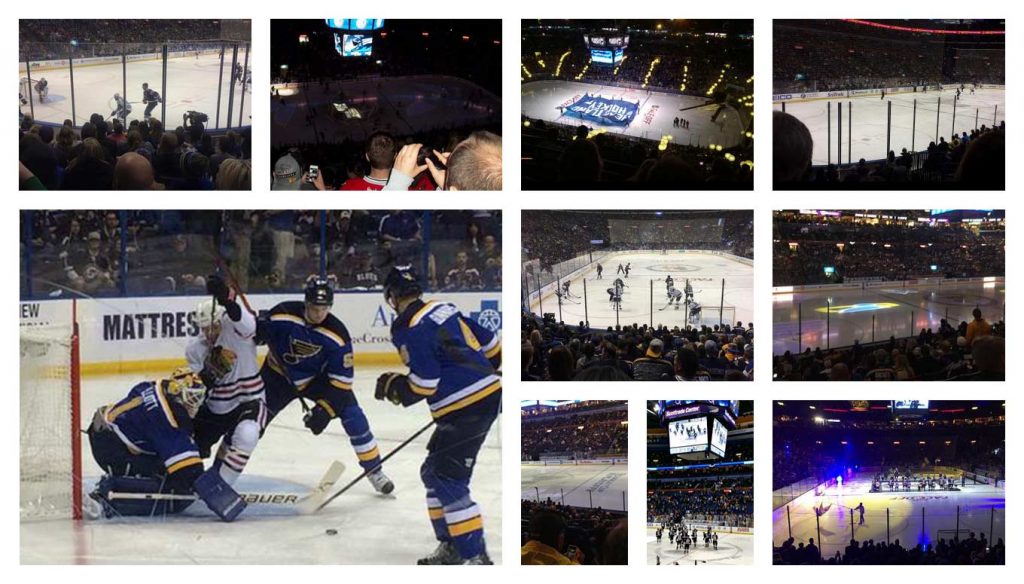 Founded in 1967, the St. Louis Blues have brought five decades of edge-of-your-seat hockey to fans in the Gateway to the West. The past 50 years of play include a number of accomplishments and highlights, including nine division championships and a Presidents’ Trophy. The team also has 19 players and three contributors to the squad’s development in the Hockey Hall of Fame, an especially impressive tally. Today, the Blues are still going strong and their fans remain as dedicated to the squad as ever. Read on for more on the Blues, their arena, and their devoted fans.

The action on the ice is always intense and fast-paced at Scottrade Center. The Blues made the arena their home in 1994, and since then they’ve built up some serious team history inside its confines. Fans love the atmosphere of Scottrade Center and take advantage of its many concessions and other offerings to fuel up when cheering on the Blues. The building has fixed and mobile vendors throughout, with a variety of game-time delicacies available. The menu includes (but isn’t limited to) bratwursts, pile-up hamburgers, pizza, pretzels, chicken tenders, tacos, barbeque, salads, and stir fry. There are a variety of gluten-free options as well.

A unique space for fans inside the arena is Pepsi Plaza, which features an open atmosphere and a host of food choices along with big-screen TVs showing hockey and other pro and college sports throughout each game. The True Blues Authentic Team Store offers all fans a chance to suit up in the team’s blue, gold, navy, and white with a variety of apparel and memorabilia.

The Blues give fans an action-packed treat each time they take the ice, but this squad’s giving doesn’t stop there. The Blues have a strong tradition of community involvement through Blues for Kids, the team’s charitable trust. Blues for Kids has contributed more than $3 million to the surrounding community for initiatives centered on cancer care and awareness, education, health and wellness, and youth hockey. One such program is Street Blues, a ball hockey program that can be used by local schools both in physical education classes and after school.

Connect with the Team

Famous Fans in the Stands

The Blues count a number of celebrities among their fans. Some of their notable supporters include actor John Hamm, according to Time Warner Cable, actor John Goodman, and sportscaster Joe Buck, according to SB Nation, as well as a number of St. Louis Cardinals who support the city’s winter team throughout the baseball offseason. .

Of course, there are fans made famous inside Scottrade Arena for their passionate fellowship as well. Lily Wood made the news nationally when she implored the coach of a rival team to sit down so she could see the game. The video of the then-fourth-grade student made a viral splash online and led the St. Louis Post-Dispatch to officially declare her a superfan.

With a great team, a fun arena, and always-powerful game-day experiences, it’s no surprise the Blues have such a dedicated fanbase.

Get in the game
Check out the St. Louis Blues schedule and view Ticketmaster NHL and the NHL Ticket Exchange for Pittsburgh Penguins tickets.