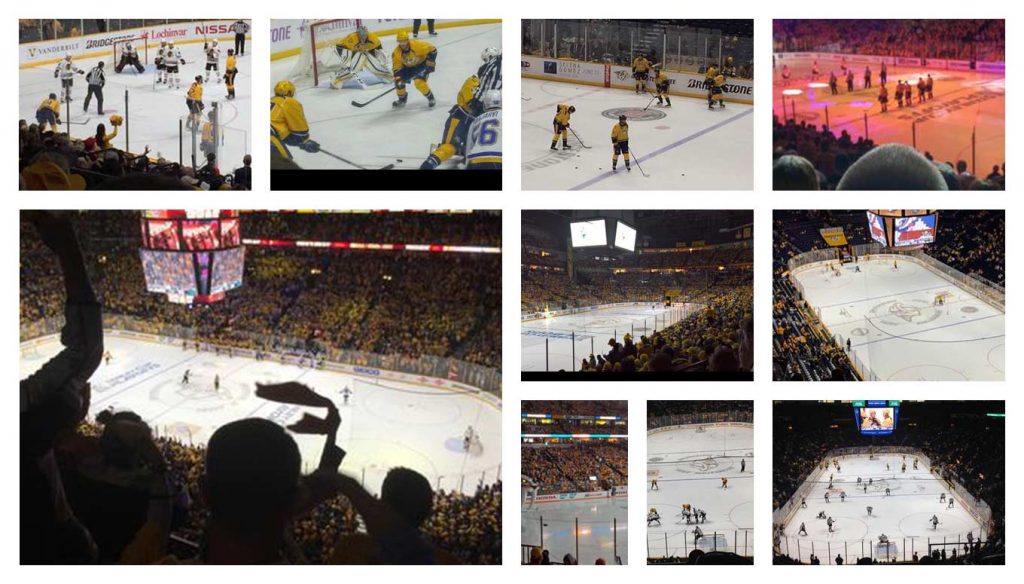 The Nashville Predators are growing into their role as a major fixture in the Nashville area and beyond, giving Tennesseans a hockey team of their own to cheer on with pride.

With plenty of individual awards and honors for players in recent years, like placements on All-Rookie and All-Star teams, the Preds are definitely on an upswing.

The team also has some of the most passionate fans around, supporters who show up game after game to root for the Predators. The best place to find them? Inside the Bridgestone Arena.

Whether you call it the Stone or the Bridge, this arena is familiar territory for the Preds and their fans.The team has never called another another place home and, at this point, fans know the building well enough to make as much noise as possible when cheering.

All of that noisemaking can quickly make you hungry, so it’s a good thing the arena offers plenty of dining options.

There are also some more adventurous options and a few local favorites, like stir fry, Nashville hot chicken, chicken and waffle sandwiches, and, for dessert, Nashville invention and favorite Goo Goo Clusters.

The arena also features sit-down dining at Tavern ’96 for a more traditional experience.

The team cares about the community

Being an important part of the community means supporting the people who make Nashville such a vibrant and exciting city.

The team does exactly that through The Nashville Predators Foundation, which organizes the team’s many gifts and awareness-raising efforts. The Foundation provides grants to worthy organizations throughout the region, with a focus on helping children and families.

A recent contribution of $500,000 to domestic violence prevention organization MEND is a great example of the work the Foundation does.

Another major initiative is the 365 Pediatric Cancer Fund, which raises awareness of childhood cancers and contributes money toward research. It also gives kids battling these diseases fun experiences by meeting players and going to games.

Keeping up with the Preds

The squad knows how much fans like to keep up with the team, so they have plenty of active social media accounts to provide the latest news, video, stats, and much more.

Celebrities and superfans in the stands

Hailing from Music City, USA, means there are some big names who root for the Predators.

Two country superstars you can regularly spot at the Bridge are country musicians Vince Gill and Carrie Underwood, according to Fox Sports.

There are also some fans who are famous inside the arena for their dedication to the team. Preds fans know Big Ben his enthusiastic cheering and using body paint to get his message across.

When the time came to propose to his girlfriend Brandy, he used a familiar tactic, USA Today said. With the proposal featured throughout the arena, Brandy said yes, and this superfan had a wedding to plan.

With fans famous and fanatical cheering them on, it’s no surprise the Preds are a team on the rise.

The Ottawa Senators have only a few decades of hockey to their name, but that hasn’t stopped the team from becoming the pride of Canada’s capital city. With ...