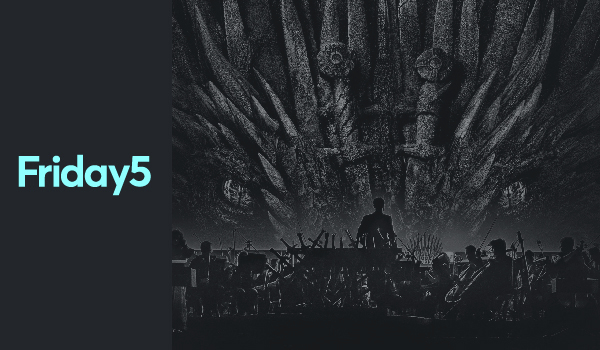 This week comes with a slew of announcements that are sure to please music lovers of all stripes. Find out who is up for a coveted Americana Music Award, who will be hitting the road starting this August, and what beloved HBO show will be coming to life on the stage.

Game of Thrones isn’t quite over yet, and its Emmy Award–winning composer, Ramin Djawadi, is making sure its magic lives on — at least in song. He will be bringing together the best musical pieces and footage from all eight seasons into a full-on outdoor concert experience. Djawadi will also be making special appearances at the shows in NYC, Irvine and Los Angeles. The tour begins on September 5 in Syracuse, New York, and heads across the country before concluding on October 5 in Los Angeles. Get your tickets now.

The best in folk, roots and Americana music will be vying for a win come September 11 in Nashville at the Americana Honors & Awards ceremony. This year, women dominate the nominations, with Amanda Shires, Lori McKenna and Yola all up for Album of the Year (along with John Prine), and Brandi Carlile, Rhiannon Giddens, Kacey Musgraves and Mavis Staples up for Artist of the Year. Most of these artists are now on tour — be sure to catch them on the road if you can’t make it out to Nashville for the big event this fall.

The Grammy-nominated Colombian star J Balvin will be bringing the hits to stages across North America come this fall. His just-announced Arcoiris (The Rainbow) tour will stop in 25 cities around North America, launching in San Juan, Puerto Rico, on August 30 and wrapping up in Los Angeles on October 26. Lyanno and Eladio Carrion will join him as opening acts. Tickets go on sale today.

Next round of #HappinessBeginsTour pre-sales start now for @americanair #AAdvantage @mastercard credit card holders on the East Coast! Tickets will become available at 10am local venue time in each city 🔥

Everyone’s favorite brother trio is back to take on cities across the nation for their Happiness Begins tour. The band announced the tour a few weeks ago and, due to high demand, have already added more dates. The tour kicks off on August 7 in Miami, and is scheduled to conclude on December 14 in Los Angeles. You’ll get a chance to be fully prepared for the show when they drop their first album in a decade, ‘Happiness Begins,’ on June 7. Tickets for the newly announced shows go on sale tomorrow.

Here’s your 2019 #MusicMidtown lineup 🙌 Tickets on-sale Friday at 10am ET at musicmidtown.com! More info at @rollingstone (link in bio)