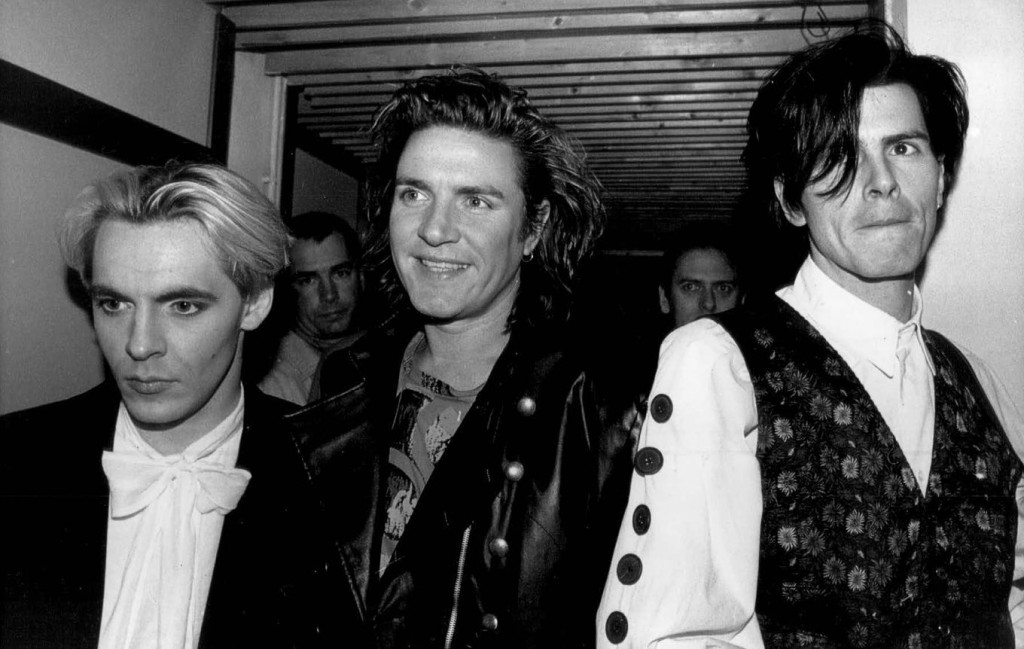 The spectacle of ‘80s pop was made all the more striking by the outrageously awesome fashion statements of the musicians who brought it to life, and British synthpop superstars Duran Duran were at the vanguard of the decade’s most iconic styles. It’s been more than three decades since the band first shook up the new wave scene with their timeless tunes and bold stagewear, androgynous makeup, and flashy accessories, and they’re still setting the pace for style in pop music today. Today Duran Duran is as sharp as ever with a streamlined modern look, and they just announced a massive 2016 North American Tour in support of their latest album Paper Gods, where they’ll be joined by Chic feat. Nile Rogers.

To help you gear up for the Paper Gods Tour, we’ve rounded up some of Duran Duran’s most iconic fashion statements through the decades. Check out the epic looks below, and don’t miss the band as they bring their inimitable style to the stage on tour.

1980s: From Clubs to Stadiums to TV Screens

After establishing themselves in the UK club scene in the late ‘70s Duran Duran released their self-titled debut album in 1981, becoming global superstars overnight thanks to hit singles like “Planet Earth” and “Girls on Film”. Complementing their fresh sound was their outré visual image, replete with makeup, teased hair, and coordinated stage wear that included leather pants, military-inspired jackets, and colorful scarves. Their wardrobe at the time read like a who’s who of groundbreaking ‘80s designers – the band wore everyone from British luminaries like Galliano, Alexander McQueen, and Antony Price to Japanese trailblazers like Yohji Yamamoto, Issey Miyake, and Comme des Garcons.

Fans around the world discovered their envelope-pushing style and edgy sound thanks to the growing popularity of the music video – Duran Duran’s video for “Girls on Film” was created just weeks after MTV launched in the US, and they were one of the first bands to enter heavy rotation on the newly minted station. By the mid-‘80s they were selling out stadiums on international tours and topping the charts with albums like Rio and arena-sized anthems like “Hungry Like the Wolf”. As if their reach wasn’t already big enough, their edgy image was broadcast to 1.5 billion fans around the world when they performed at the legendary fundraising concert Live Aid in 1985.

By the ‘90s the popularity of synthpop was waning and alternative rock was on the rise, and Duran Duran adapted accordingly, updating their sound and returning to the Top 10 in both the US and UK with their 1993 album Duran Duran (The Wedding Album). Hit singles like “Ordinary World” and “Come Undone” showcased the band’s new alt rock-influenced bent, and the songs’ music videos revealed a new visual image that traded in bold makeup and flashy duds for classically tailored suit jackets and crisp white shirts.

Along with the new millennium came a number of milestones for the band. In 2003 they performed a handful of sold-out 25th anniversary shows, and later that year they received a Lifetime Achievement Award from MTV. The following year their 11th studio album Astronaut once again landed them at the top of the charts, leading to a sold-out tour of the US, Australia, and New Zealand.

Other benchmark moments during the decade included performances at London’s massive Wembley Stadium, a set at the Louvre in Paris, and a nationally broadcast tailgate show at Super Bowl XXXVIII. While streetwear had become popular during the ‘00s among pop’s new pack of rising performers, the band once again forged their own path, opting to take the stage at their shows in dapper suits that underscored their veteran status.

Duran Duran kept their fingers firmly on the pulse as the new decade got underway – in December 2010 they released their 13th studio album All You Need Is Now, which was produced by Grammy-winning “it” producer Mark Ronson. The album topped the download charts in 15 countries, drawing the band out for another huge tour. Their tireless commitment to fashion was honored the following year when style epicenter Milan, Italy recognized the band with a Style Icons of the 20th Century Award and keys to the city.

Another huge honor came in 2012 when the band was asked to perform at the opening ceremony of the 2012 Summer Olympics in London. Lead singer Simon Le Bon took the Olympic stage in a slick leather jacket featuring a patchwork rendition of the British flag, a subtle nod to the band’s ‘80s heyday. Since then they’ve continued to pay homage to the ‘80s, reprising their bold leather jackets and sharply contrasting black and white ensembles.

The band’s reign continued unabated in 2015 with the release of their 14th studio album Paper Gods, a Top 10 hit in both the US and the UK that features collaborations with young stars like Janelle Monae, Lindsay Lohan, and Kiesza. The Paper Gods Tour kicks off in 2016 with support from disco legends Chic feat. Nile Rogers and promises ticket buyers an unforgettable night of epic music, party-worthy vibes, and timeless style.

Updated to reflect a photo caption change from Roger Taylor to Warren Cuccurullo.

What to Wear to the Kentucky Derby: 33 Head to Toe Fashion Tips

The most exciting two minutes in sports, aka the Kentucky Derby, is coming up fast. It’s never too early to start prepping your outfit. Lucky for you, below ...