From the Ticketmaster Archives: Cold War Kids Interview in 2008 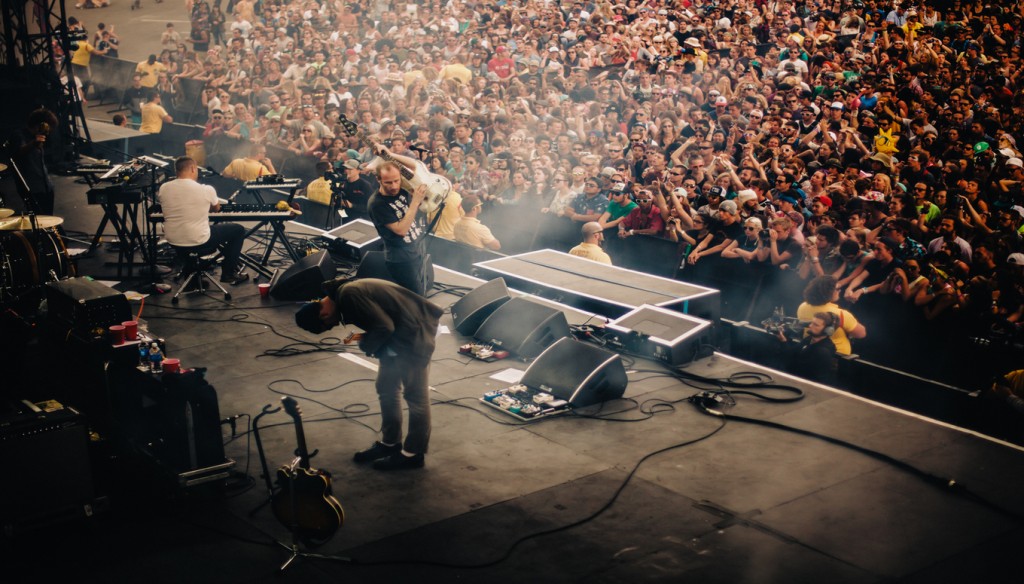 While digging through the Ticketmaster interview archives we unearthed a gem – a chat with Cold War Kids’ bassist/guitarist Matt Maust that took place just before the release of the band’s sophomore release Loyalty to Loyalty. It’s a perfect snapshop of the rising band as well as indie rock in general circa 2008.

Cold War Kids burst out of southern California to take the indie rock world by storm with the release of their critically acclaimed debut Robbers & Cowards in 2006. The band’s bluesy, soulful brand of rock impressed critics and fans alike, and their stellar live shows and never-ending touring schedules won them an ever-growing cult following. In the past seven years they’ve stayed busy in the studio and on stage: they released four more albums including Hold My Home while touring with indie greats like Death Cab for Cutie and appearing at era-defining festivals like Bonnaroo and Coachella.

Read on for Maust’s thoughts on everything from writing and recording Loyalty to Loyalty to translating its songs to the live stage. And be sure to catch the band on the road in support of their latest release, Hold My Home.

Ticketmaster: Did touring for so long in 2007 have an impact on how you approached Loyalty to Loyalty?

Matt Maust of Cold War Kids: In some ways, yeah, it definitely affected it. Our first record, Robbers & Cowards, doesn’t feel like a record to us four as a band. I know it’s a record in the public eye, but it’s really a conglomerate of a few EPs and re-recordings—this fruit off this tree, this fruit of that tree. So that’s what that record is to us. Most of the songs were written before we had any kind of audience. They were all written before we had even done any touring. So, in a lot of ways, Loyalty to Loyalty really feels like the first record. We know we have an audience now, but at the same time, we’re trying to create some sort of vacuum. Not to ignore the audience, because that’s the last thing we want as a band. You want to draw people in, but at the same time, you want to write music that you would write whether there was an audience or not. Like any artist, I feel you should create what you want to create, and hopefully people enjoy it.

Ticketmaster: How are the new songs translating to a live setting?

Matt Maust of Cold War Kids: Many of the songs haven’t been played live yet, so I’m not sure how they’re going to come across. Songs like “On the Night My Love Broke Through” and “Relief” haven’t been played live yet. We’ll have to figure that out this next week. We’re going to rehearse all week because our tour is upon us. I do know that it was hard for us—writing songs that you’re not sure how will be played live. It’s a thing that you dive into and hope for the best. The same thing happened with our first record. Our live show sounds nothing like it does on the record. That’s what makes our band our band. We’re one of the few bands that people have latched onto not because of our records so much, but because of our live show. We do play the songs differently live than we do on the record. So a lot of the new songs don’t sound like the recorded version.

Ticketmaster: What are the main differences—musically and thematically—between the first album and the new one?

Matt Maust of Cold War Kids: This record is much more beefed up. It’s heavier, deeper. It’s a lot more relevant, more today. A lot of people say the last record was more about yesteryear—folk stories and myths with made-up characters. This new record has some of that, but it’s much more today. The characters are people from today. It’s still not really autobiographical. It’s not Nate (Willett) singing about himself in these songs—hardly at all. It’s definitely a little more 2008. In terms of recording, it was done over a period of four months, so we had more time to experiment with sounds. The first record was done in about eight days—eight days for everything. We also mixed the first record with a person who didn’t engineer it. It has a much more polished, for-radio sound. This new record was mixed by the same person that engineered it, and we had a much tighter rein on how we wanted it to sound sonically. So it’s a little deeper, grittier, and less prepared for radio, which is something we should have made sure happened with the first record. I think that’s one flaw from the first record.

Ticketmaster: The album’s been called darker. Would you agree? If so, what do you think brought about this darker outlook?

Matt Maust of Cold War Kids: Yeah, I think it is. I’m not sure what brought it on. Maybe I’ll know in a year. We’re still in that period. When you’re in the dark, you don’t know you’re in the dark. I don’t think it’s a darkness that’s trying to be dark. We write our songs in a way that we don’t have a spelled out goal that we’re working towards. We throw a whole lot of spaghetti, a whole lot of noodles, at the wall, and the ones that stick form the record. I guess the spaghetti is so fresh on the wall that I’m not sure how to make sense of it yet. So I don’t know what makes it dark. Maybe too much touring did it. But I think it was good for us. There’s nothing more unattractive than a band writing their second record from the perspective of the road. That’s something no one can relate to other than other bands, and that’s not who your audience really is. So I’m thankful we didn’t write a record that’s “on the road again” type music. That has its place—with the Bruce Springsteens and the Willie Nelsons—but we didn’t do that. I do think touring so much contributed to making the album somewhat dark. Europe is a lonely place in the winter time.

Ticketmaster: You played the Sunset Junction Street Festival in Los Angeles recently. How did that go?

Matt Maust of Cold War Kids: Sunset Junction was good. It was terribly unorganized, but kind of in a good way. I’ve driven through Sunset Junction [a busy stretch of Sunset Blvd. in Los Angeles’ Silver Lake neighborhood] many times. Every couple of days or weeks I’ll drive through there. All of a sudden when you’re playing a show in the middle of it with ten thousand people, it’s strange. It’s a weird feeling. Drinking beer outside in California is a no-no. So that was interesting. It was terribly unorganized, or at least it felt unorganized. Maybe it was organized. It felt like it was falling apart more than a South by Southwest party. But it was good. It was quite an honor to headline that show, being from Long Beach and having played in Silver Lake so much for two years. I think we played three or four shows a week in the LA area. One of our managers has a house a block or two away, so we had a nice little party that day.

Ticketmaster: Were you playing new material at the show?

Matt Maust of Cold War Kids: Yeah, we played about half and half. It’s been interesting seeing people not really move too much to the new songs because obviously they don’t know them. It’s kind of refreshing. People are quiet again, which is nice.

Ticketmaster: The tour in support of the new album really gets going later this month (September 2008). Excited?

Matt Maust of Cold War Kids: Yeah. We’ll be playing at the Fonda in LA the day after the record comes out. We’ve never played there before. It’s a new venue for us. It goes pretty strong until December, playing all of the US and all of Europe. We’re having a fellow named Sean Hayes from San Francisco go on tour with us. Our good buddy Richard Swift will be playing a couple of the shows in California with us. He’s opening. He’s probably one of the best songwriters I know living right now under 40. We actually did a split 7” with him where he remixed our “Something’s Not Right with Me” that we’ll be selling at our shows. It’s a limited-edition thing. He took all of the files and tweaked them to his own liking. So I’m excited about the company on the tour. The company’s going to be great.

Ticketmaster: Has the band’s live show changed or evolved since you first started out?

Matt Maust of Cold War Kids: I don’t feel like it has changed so much. We’re so new. Saying it hasn’t changed could make things seem stagnant, but we’re such a new band. We’re not even four years old. I just feel like there’s more space between us now—literal space—just because we used to play these tiny, little clubs. We played a couple of secret shows in LA about a month and a half ago to get warmed up for this tour. And those shows did the opposite—they were so small and we weren’t used to playing that tight again. So it was a challenge to play in tight quarters again. All I can really say is the space has gotten bigger and so you have to come up with new ways to stay intimate with each other and with the crowd.