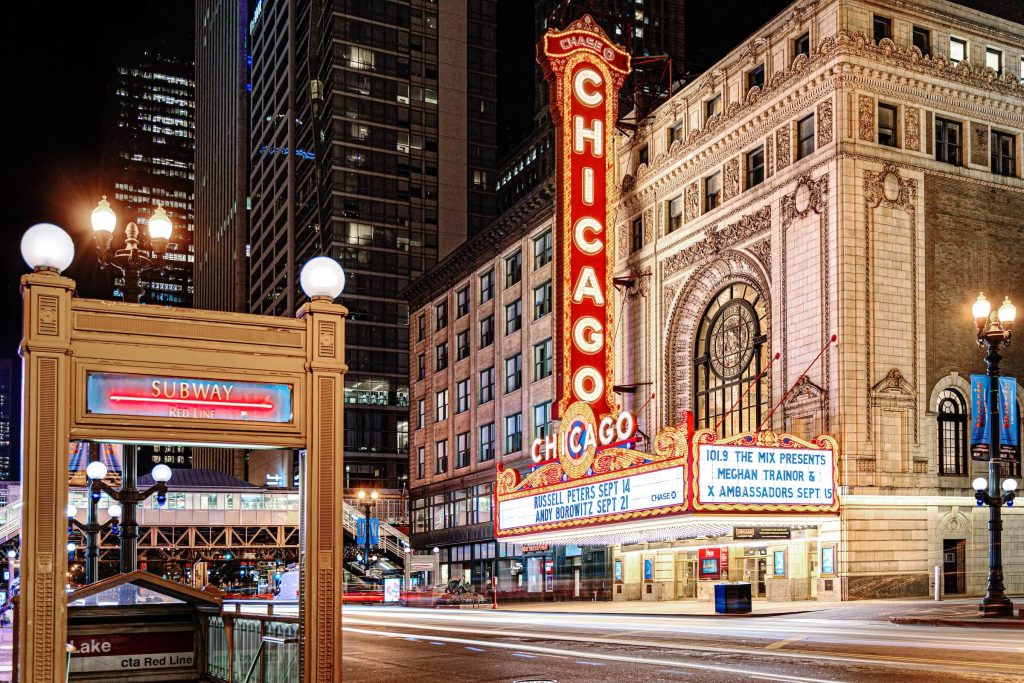 Featuring astounding architecture, breathtaking views, and world-renowned performances, Chicago is home to some of the most beautifully designed and historic theaters in the world. The arts and culture scene in Chicago generates an estimated $2.25 billion annually, with Chicago theaters attributing $90 million in ticket and admission sales while creating more than 6,000 full-time-equivalent jobs. Whether it be a small intimate performance or a grandiose Broadway show in Chicago, the Chicago theater scene has transformed this Midwestern city into one of the top performance and arts hubs on the planet.

Built in 1921, The Chicago Theatre remains a flagship landmark for this great city. Located in the heart of the downtown loop area, the Chicago Theatre marquee illuminates State Street, beckoning theatergoers from around the world. Designed by Cornelius and George Rapp, this 3,600-seat theater was built as part of the Balaban and Katz Theatre Corporation. The exterior features a 60-feet-wide and six-stories-high mini replica of Paris’ Arc de Triomphe, and the chic, luxurious interior lobby, modeled after the Royal Chapel at the Palace of Versailles, leads the grand stairway into the striking auditorium. Home to live and film entertainment, this theater has been the stage for the greatest acts in the world, including Robin Williams, The Allman Brothers Band, Prince, Diana Ross, Oasis, Dolly Parton, Van Morrison, and many more. Due to a variety of social and economic factors, the Chicago Theatre closed in 1985. Chicago Theatre Restoration Associates, with help from the City of Chicago, bought and refurbished the theater in 1986, reopening that same year with a grand performance by Frank Sinatra.

Get tickets to the Chicago Theatre

Opening as the Majestic Theatre in 1906, the CIBC Theatre quickly became a popular destination for vaudeville acts such as Harry Houdini and Lillie Langtry. This old Chicago theater was designed by Edmund Krause, George Rapp and Cornelius Rapp. Features of the theater included fantastic sightlines and multi-level balconies. Being the tallest building in Chicago at the time and the first to cost more than $1 million, the CIBC Theatre was known around the country as a Chicago landmark. During the Great Depression, the theater closed in 1932. It remained closed until 1945 when the Shubert Organization bought and reopened the theater as the Sam Shubert Theatre. Maintaining much of the original design, the CIBC Theatre became home to the most popular plays and musicals of the time, including South Pacific, Guys and Dolls, The King and I, My Fair Lady, and Carousel. The CIBC Theatre continued to thrive for decades, premiering Chicago and Rent in Chicago. Closing again in 2005 for a multi-million-dollar renovation, the theater opened as the LaSalle Bank Theatre in 2006. It was quickly renamed the Bank of America Theatre in 2008 where it saw the pre-Broadway world premiere of Kinky Boots as well as Book of Mormon. In 2015, the theater announced a partnership with CIBC and Broadway In Chicago where it continues to host an array of shows such as Cabaret and Hamilton.

Get tickets to CIBC Theatre

The Auditorium Theatre was designed by famous architectural firm Adler & Sullivan in 1889. Known for its flawless acoustics and miraculous design, this old Chicago theater was a spectacle of technology and innovation, being built with electric lighting and air conditioning. Along with the theater, this was the first multi-purpose building to include a hotel, retail spaces and offices. Legendary architect Frank Lloyd Wright, who worked as a draftsman on the project, said this building was “the greatest room for music and opera in the world—bar none.” Containing 24-carat gold leafed ceiling arches, beautifully crafted stencil patterns and countless floor and wall mosaics, this theater created the new standard for architectural perfection. Closing down during the 1940s, the newly restored theater reopened in 1967. Some of the greatest acts and the most famous figures held the stage in the Auditorium Theatre throughout its 130-year lifespan, including former Presidents Theodore Roosevelt and William McKinley, plus legendary artists such as The Doors, Elton John, Aretha Franklin, Frank Sinatra, Stevie Wonder, and Ray Charles. The venue also showcased Les Misérables, Phantom of the Opera, the New York City Ballet, and the American Ballet Theatre, to name only a small fraction of performers and performances that have taken place at this historic theatre.

Get tickets to Auditorium Theatre

The Athenaeum Center for Thought & Culture

A post shared by Athenaeum Center for Thought & Culture (@theathenaeum_chicago)

Originally founded by the Redemptorist Fathers of St. Alphonsus Catholic Church in 1911, the Athenaeum Center for Thought & Culture continues to be used as a location for community and the arts. Designed by Hermann J. Gaul, the theater was built for Chicago’s display of opera, dance, orchestral, and dramatic expression. Containing three floors and four performance areas, including one main stage and three small studio theaters, the 66,000-square-foot building seats 1,220 patrons. The name Athenaeum originates from Greek and is defined as “a temple of Minerva at Athens, in which scholars and poets gathered to read their works” and “an association of people of literary or scientific tastes for the purpose of mutual improvement.” The oldest off-Loop theater in Chicago, the Athenaeum’s excellent acoustics and intimate seating allows the theater to retain its Old World charm.

Get tickets to the Athenaeum Theatre

Jessie Mueller shot to Broadway stardom in 2014 with her Tony-winning portrayal of Carole King in the hit musical Beautiful. Now she’s back with anothe...