Buffalo Sabres Supporters are a Herd of Big Fans 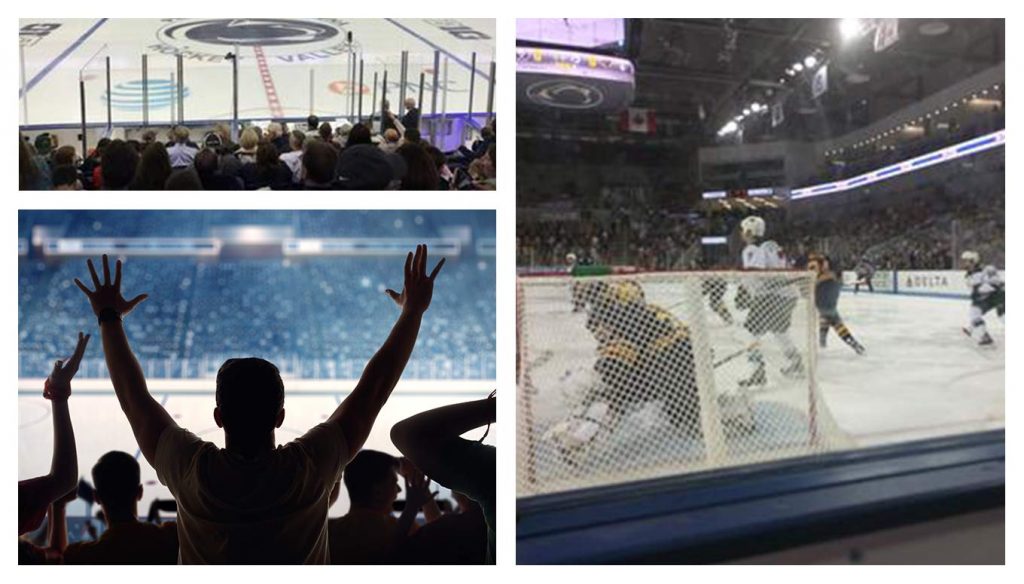 The Buffalo Sabres play in a traditional hockey hotbed, taking the ice in front of many fans who not only regularly watch hockey but grew up playing it. The team has fought hard for a number of achievements since starting play in 1970.

Those accomplishments include two trips to the Stanley Cup finals, two conference championships, six division championships, and a Presidents’ Trophy.

The Sabres also have 10 former players enshrined in the Hockey Hall of Fame, as well as three coaches, three team broadcasters, and four sportswriters who covered the squad.

With so many people connected to the Sabres receiving pro hockey’s highest honor, it’s no surprise they have a fervent fanbase cheering them on.

Superfans come in many forms, from those who dress head to toe in team gear at the KeyBank Center to the dedicated fans who set aside significant space in their homes to build shrines to the Sabres.

There are also dedicated fans who pen odes to their team. Adam De Rose is one such fan, best known for his book “On the Road Again: My Hockey Memoirs.”

De Rose spent close to five years working on the book, which included regular travels to Sabres away games across the North American continent.

Building connections with the community

The Sabres care about Buffalo and the surrounding area, and they make that commitment clear through the efforts of the Sabres Foundation. This charitable organization works with other nonprofits to support children, veterans, and athletes with special needs, and invests in youth hockey initiatives.

The program gives environmentally conscious fans advice on reducing energy use at home, reducing waste, and much more.

It also offers a wide range of special events, like shredding days to responsibly and safely dispose of personal documents and carbon monoxide detector drives and donations.

With more than 50 years of team history, there are plenty of celebrities who have flocked to Sabres fandom. Just a few of those famous fans include:

The KeyBank Center is key to a great time

The KeyBank Center has provided a boisterous home ice atmosphere for the Sabres and their devotees since 1996. Fans have enjoyed 20 years of Sabres games in the building and have responded with plenty of loud and proud support.

#YouCanPlay Night will be held in Buffalo on Feb. 7 against San Jose! #hockeyisforeveryone ?

Part of the fans’ ability to make so much noise comes from the fuel provided by the many foods available inside the arena.

New foods that coincide with the changeover to the KeyBank Center name include regional favorites like pierogi, polish sausage, and beef on weck burgers, along with more adventurous takes on classic favorites like grilled cheese kabobs.

A ramen bar featuring made-to-order stir fry is one of the most popular additions.

It’s called the Go-Ru Noodle Bar, a nod to the food’s Japanese heritage and its close proximity to the Sabres – Go-Ru is the phonetic Japanese pronunciation of that language’s word for goal.

Sabres are Serious About Their Apps

Along with the standard social media channels, Sabres fans have access to two especially powerful apps. Club Sabres is a kid- and family-friendly app, providing a safe and fun environment to keep up with team, test their Sabres knowledge with trivia questions, and much more.

Meanwhile, the My One Buffalo app, available on Apple and Android devices, paints a complete picture of the Buffalo sports world.

With everything from border-crossing and traffic times to news and schedules for all of Buffalo’s teams, this app keeps fans from the city and surrounding area plugged in.

A sense of dedication among fans and a great tradition of hockey in and around Buffalo mean the Sabres have some of the most active and involved supporters in pro hockey.