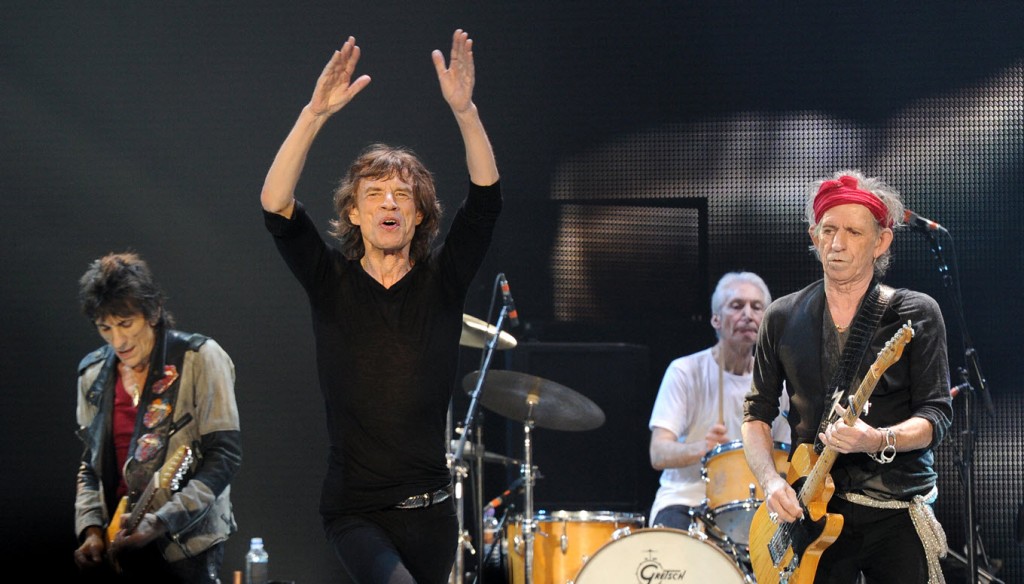 Today The Rolling Stones announced their Zip Code tour, which will stop at 15 stadiums across North America in the summer of 2015.

Their first stadium tour in over a decade also coincides with a remastered version of Sticky Fingers just in time for the album’s 45th birthday. That means that another piece of Stones’ memorabilia is also turning 45: the iconic tongue and lips logo that the band first featured on Sticky Fingers. We thought we’d show you some of the most interesting things that have been done with this indelible image, easily the most recognizable logo in rock.

This flatter, slightly tamer version of the classic design is the basis for all the others. Though it was used for much of the merchandising and touring that surrounded Sticky Fingers, it’s not the version that actually appears on the album cover.

The logo that will live forever. John Pasche at the great @GraphicsRCA FiftyYears exhibition pic.twitter.com/6LMoWXndAf

For his version, John Pasche added some additional white highlights to give the lips a little more plumpness. These simple flourishes (based on Mick Jagger’s actual lips) helped make it the iconic symbol of the band and the most recognizable emblem in all of rock ‘n’ roll.

Think I wanna get a Rolling Stones tattoo with the Colombian flag on the tongue pic.twitter.com/ZWVgszUBkF

Since The Rolling Stones are one of the hugest international bands of all time, it makes sense that one of the most popular variations is to draw your country’s flag on the tongues. Now whenever The Stones visit U.S., Japan, Argentina, Denmark, or anywhere else in the world they have a legion of fans to make them feel right at home.

After the Bridges to Babylon tour in which the band played hundreds of large open-air venues, The Rolling Stones wanted to bring a scaled-back sound to their fans. The yellow and black striped tongue encapsulates the “enter at your own risk” feeling of these more intimate shows.

On their 40th anniversary The Rolling Stones released a career-spanning double CD compilation of their greatest material. This panchromatic rendition of the classic tongue hints at how many different styles The Stones managed to make their own during their illustrious career.

After releasing their first new album in almost a decade, The Stones were ready to hit the road. This exploding version of the tongue is a perfect representation of the ensuing tour’s success over 144 shows in a two-year period.

This brilliant reimagining of the classic logo was perfect for the larger-than-life spectacle of the Super Bowl. It’s OK to be a little bit jealous of the fans that were lucky enough to rock out in the middle of the classic tongue logo once the band started it up on stage.

When the mastermind behind the Obey graphics was approached by his musical heroes to work on their 50th Anniversary artwork, his main goal was to let the classic logo speak for itself. He did incorporate the number 50 in a very interesting way to add a little of his own flair.

The tongue got another subtle redesign for the group’s 50th birthday on the cover of their greatest hits album “GRRR!” Designer Walton Ford played up the group’s dangerous and wild side by adding fangs to the classic image.

I made this rolling stones tongue out of recycled wood! #Rollingstones #recycledwood #reclaimed #homedecor #art pic.twitter.com/4zUltSUDfp

@RollingStones The @OhioState marching band did the Tongue and Lips at halftime! How cool is that?!!! pic.twitter.com/TheCye7xtw

Like the tree @RonnieWood found in #Barcelona, the @RollingStones will always be a work of art! HT @MabelTradu pic.twitter.com/Y55yd032Go