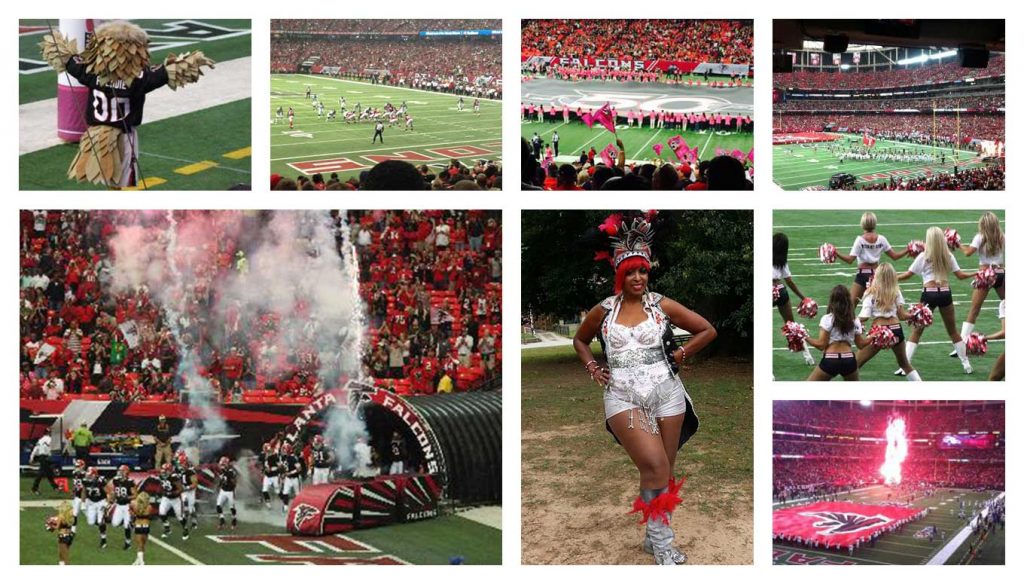 When you think about American football, your thoughts should definitely turn to the Atlanta Falcons. First hitting the field back in 1966, the Falcons are a direct link back to the glory days of football, one of passion, tenacity, and a sense of honor.

But the team is ever focused on what’s next, and that’s playing great football for Falcons fans the world over.

“I hope that would come through when you watch us play,” said head coach Dan Quinn. “I hope people say, ‘Man, do these guys play hard, and look how fast they play. These guys are tough.'” The fans can see that commitment, and they show it by filling up home games, chatting up the Falcons online, and showing their pride anyway they can. For Falcons fans in 2016 and beyond, there is plenty to be proud of.

Online all the time
When it comes to expressing their fandom, Falcons followers have quite a few places to perch. The team’s official website includes a massive gallery of photos and videos, including snapshots from training sessions and exclusive player interviews. It’s about as close as you can get to the action without actually being at the stadium.

Another fan resource is The Falcoholic, which offers a wide array of articles and commentaries on everything from the defensive line to players’ favorite music. While each site offers different perks, both sites can agree on one activity: being a Falcons fan rules.And, of course, Falcons stay plenty busy on Facebook, Instagram, and Twitter. No matter your preference, you’re never more than a few clicks from all things Falcons.

Famous Falcons
Atlanta is a true hotbed of southern culture and living, and it’s those traditions that have helped make it the ninth largest metropolitan area in the U.S. But while many famous folks come to enjoy soul food or Atlanta’s nightlife, the Falcons are one of the city’s biggest draws. The team’s high-profile followers include:

The mighty Birdman
What other Falcons may lack in celebrity, they more than make up for in ceaseless passion. Case in point, one nameless fan (pictured below) will #RiseUp and show his pride by wearing a rather intricate bird costume. Looking like part superhero, part giant falcon, this “Birdman” attends just about every home game, and even brings his mother to cheer right alongside. He deserves some sort of massive trophy simply for wearing a giant bird costume in that humid Atlanta weather.

A modern sports fan’s mecca
The Falcons have called the Georgia Dome home for 25 years. Once one of the largest domed structures in the world, the Dome has seen its share of memorable moments and the team will play its final season there in 2016.

The Falcons’ next era is set to begin in 2017 with the opening of Mercedes-Benz Stadium, a state-of-the-art sports and entertainment venue located in the heart of downtown Atlanta, Georgia. Want to see construction crews finish building the Falcons’ brand new home? Fans can watch a live feed 24/7.

Mercedes-Benz Stadium is one of the most promising venues in sports. Arthur Blank and the Atlanta Falcons set out with the stated goal of re-imagining the fan experience and ensuring that the entire game-day – from the moment fans leave for the game to the moment they return home – is unparalleled. Among its many amenities, the stadium will feature a 60,000 square foot plaza offering friends and families a gathering place before the game. Additionally, the stadium will feature a first-of-its-kind HD halo video board that will span the length of the field and sit five stories high, premium club seating, wider concourses, wider seats and a premium in-game presentation designed to create an immersive, rich and one-of-a-kind game experience. The multi- purpose stadium will be home to the Falcons and Major League Soccer’s Atlanta United in addition to hosting major sports and entertainment events, including Super Bowl LIII, the 2018 College Football Playoff Championship, the 2018 Chick-fil- A Peach Bowl, the SEC Championship and the NCAA Men’s Final Four in 2020.

Lifting up the fans
Perhaps the most iconic feature is the stadium’s roof: a massive retractable roof comprised of eight unique panels that can open in less than eight minutes, creating a camera lens-like effect that exposes the inside of the facility to the open air on game days. The design itself was inspired by the oculus in the ancient Roman Pantheon, which certainly adds a sense of regalness to Sunday’s games. Even with all that innovation, the main focus behind the new building is creating a fan-first atmosphere.

That welcoming atmosphere includes loads of great food. Mercedes-Benz Stadium’s multitude of offerings will be among the most affordable concessions in the league. That means classic items like tasty popcorn and hot dogs for $2 waffles fries and pizza for $3. It’s more than just about giving fans a sweet deal and emphasizing affordability; the stadium’s concessions are all about creating an experience for fans and their families, one that makes the stadium feel like home.

Consider it just another way the Falcons hearken back to the good old days of football while keeping an eye perpetually toward the future.