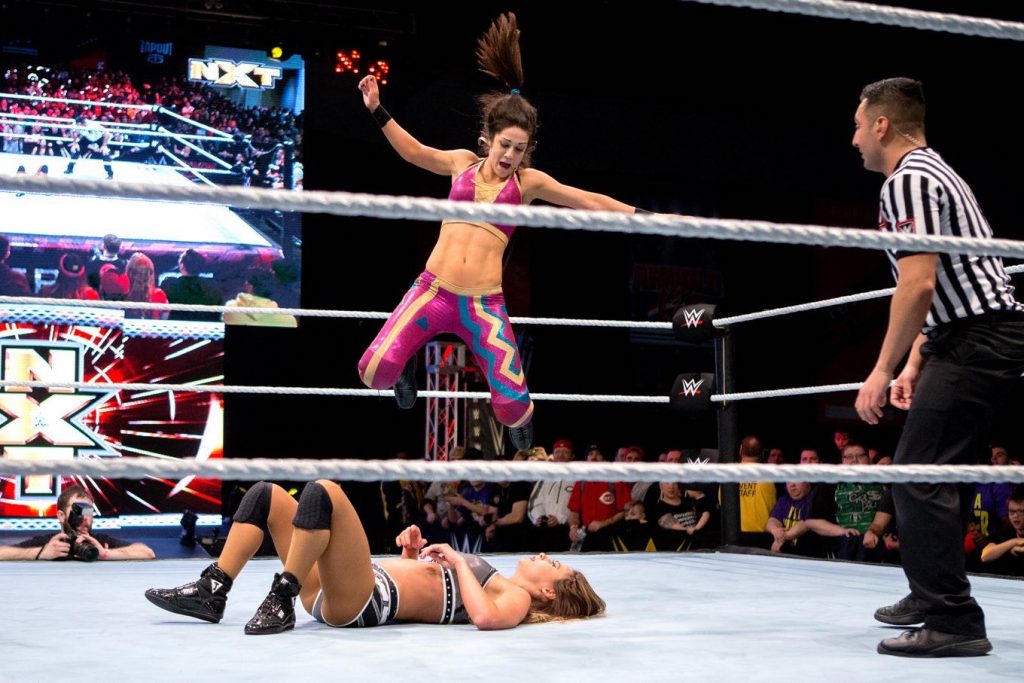 On paper, WWE NXT is the equivalent of the minor leagues in the sense that it’s meant to develop talent for the “big leagues.” But fans of NXT know that it is so much more. While it’s true the division consists primarily of up and coming talent, NXT’s characters and storylines hold their own.

So whether you’re a NXT n00b looking to learn more or a big fan who is old enough to remember Florida Championship Wrestling aka the FCW, follow these 24 wrestlers on Instagram to go behind-the-scenes, see their workouts and fitness routines, and tap into how these superstars-in-the-making cut loose with family and friends.

Asuka is in training.

Liv Morgan
IG: @yaonlylivvonce
New Jersey native Liv Morgan’s first encounter with wresting was in a homemade ring she built with her brothers in her backyard. Now she’s one of the biggest stars of NXT.

@aliyahwwe cut my score off ? she had one job

Today's workout consisted of some Bent Over Rows. —————————Keeping the bar pressed against the rack keeps constant contraction of the muscle. #murphy #NXT #WWE #beastmode

Peyton Royce
IG: @peytonroycewwe
Aside from her time with NXT, Australian Peyton Royce is also known for her modeling work.

Before the match everyone at #NXTDownload Festival chanted at me 'Asuka's gonna kick your head off' but this is what it looks like when I kick her head off! How'd that feel @wwe_asuka ??? #EatIt #GetTrapped #VenusFlyTrap

Tye Dillinger
IG: @wwedillinger
Canada’s Tye Dilinger is best known for referring to himself as “The Perfect 10” and throwing all ten fingers into the air (technically, eight fingers and two thumbs) to taunt opponents. His finishing move is also known as The Perfect 10 (a single-knee facebreaker).

#NXTOmaha ….tonight a #Perfect10 is coming your way. Get out your cameras… ???

Working on those wings ???? #backattack

Billie Kay
IG: @billiekaywwe
Billie Kay began wrestling in her native Australia back in 2007. After performing with various other organizations, she took part in a try out for NXT in 2015 and was asked to join.

A big weekend coming up for @wwenxt The #FemmeFatale is ready ??

#NXTGainesville if you want to see #BeautifulBlondeBlake get froggy tonight! Come out and see it for yourself

Johnny Gargano
IG: @thejohnnygargano
Cleveland native Johnny Gargano got his start with Cleveland All–Pro Wrestling, and eventually worked his way up to TNA before landing some gigs with the WWE. Earlier this year, he signed a contract with NXT.

Since all the other #GLORIOUSBOMB's are on here. Might as well pop this one up here too!

No Way Jose
IG: @nowayjosewwe
Originally from the Dominican Republic, Levis Valenzuela Jr. currently wrestles with NXT under the name No Way Jose. Previously, he wrestled in the Independent circuit as Manny Garcia.

Oh what a feeling! #nxttakeover #fiesta

Scott Dawson
IG: @scottdawsonwwe
Originally from North Carolina, Scott Dawson makes up half of the popular NXT tag-team duo known as The Revival.

Dash Wilder
IG: @dashwilderwwe
As the second half of The Revival, North Carolina native Dash Wilder (along with Dawson) are currently the reigning NXT Tag Team Champions.

"Heroes always get remembered But you know legends never die And if you don't know, now you know" @PanicAtTheDisco gets me! #NXTWarGoddess

Samoa Joe
IG: @samoajoe_wwe
Originally from Orange County, CA, Samoa Joe’s Instagram profile reads, “I kick people for money. It’s a pretty sweet gig.” If that doesn’t make you want to follow him, I’m not sure what will.

No sleep till Brooklyn #nxttakeover @joshraff_

Aliyah
IG: @aliyahwwe
Originally from Toronto, Canada, Aliyah, is known for her two finishing moves, the Arabian Night and the Magic Carpet Ride, both of which pay homage to her heritage.

"Flying high up in the sky, step up to my face and I will show you why Im ride or die" ??

Flat tire. Waiting on AAA to change it for me. Checked the Regimen manual… It said get a functional workout in. #RiddickRegimen

Snag WWE NXT tickets and follow the WWE NXT Instagram to stay in the ring with the next generation of potential WWE superstars on the come up.

27 Brilliant Things To Do for the Holidays in San Francisco, California

San Francisco and the surrounding areas may not be covered in snow come the end of December, but they still have plenty of that magical, winter wonderland feel.

Got that Black Friday itch? Round out your holiday shopping with these great live events – we’ve got something for every type of fan on your gift list....

The Ultimate Guide: What to Wear to a Football Game This Season

Now that football season is in full swing, your calendar is likely filled with game day activities. Whether you’re rounding up your squad and heading to the ...