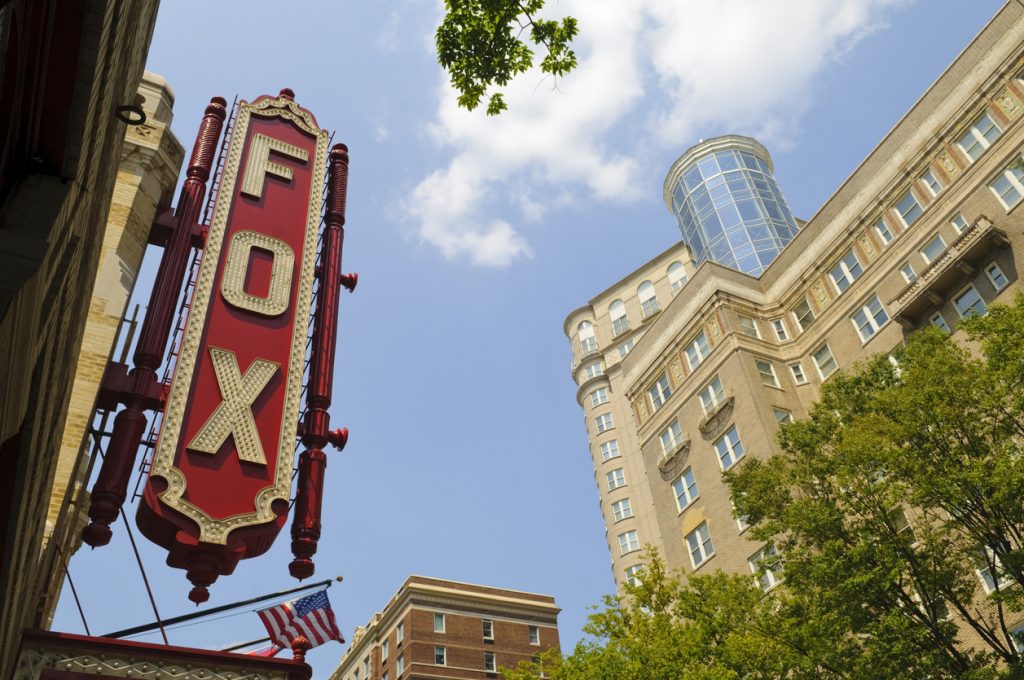 Atlanta is known as a hip-hop and rock hotspot, although the Southern city’s diverse artistic charms — as seen in its many refurbished historic theaters and sparkling new venues — ensure that the ATL has something for everyone. Whether you’re looking to catch a Hawks game or the Next Big Thing in music, here’s the scoop on where to go to see the best sports, theater, and bands in the city.

Sports and Music Venues in Atlanta

A post shared by Mercedes-Benz Stadium (@mercedesbenzstadium) on Feb 3, 2019 at 9:17am PST

With its futuristic retractable roof and massive video screen—at 62,350 square feet, the 360-degree “halo board” is one of the biggest screens in the world—Mercedes-Benz Stadium offers fans an ultra-modern experience. Opened in 2017 as a replacement for the Georgia Dome, the 70,000-plus-capacity venue has welcomed big-time musical guests (Taylor Swift, Kenny Chesney, and George Strait), but it’s primarily a sports mecca. In addition to being the site of Super Bowl LIII and the 2018 College Football National Championship Game, the stadium hosts home games for the NFL‘s Atlanta Falcons and Major League Soccer’s Atlanta United FC, as well as college football’s annual Peach Bowl and the SEC Championship game.

#Repost @atlhawks ・・・ 1️⃣8️⃣ days until the grand opening of @statefarmarena. Check out the incredible transformation.

Located a stone’s throw from Mercedes-Benz Stadium, this sleek indoor venue originally opened in 1999 as the Philips Arena, and has long been the home of the NBA‘s high-flying Atlanta Hawks. With recent renovations, the arena holds more than 16,000 fans for basketball, and now boasts free WiFi and one of the league’s largest video screens. When the Hawks aren’t in town, State Farm Arena books WWE Monday Night Raw and the home games of the WNBA’s Atlanta Dream, as well as 21,000-plus-capacity concerts by top-tier hip-hop, rock, and pop acts such as Travis Scott, Mumford & Sons, P!nk, and Fleetwood Mac.

A post shared by Ameris Bank Amphitheatre (@amerisbankamphitheatre) on Apr 3, 2018 at 1:01pm PDT

Head nearly 30 miles north of downtown Atlanta to Alpharetta and you’ll encounter the Ameris Bank Amphitheatre, which opened in 2008. Naturally, the 12,000-seat outdoor venue, which has a general admission lawn and a covered area with reserved seating closer to the stage, is hopping during the warmer months with a full slate of 30-plus concerts. Expect to hear nothing but the best classic rockers (Heart, Santana), major pop bands (Florence and the Machine), and throwback acts (Train/Goo Goo Dolls).

Night 2 ⭕️ the calm before the storm #bringontherain

A post shared by Ameris Bank Amphitheatre (@amerisbankamphitheatre) on Aug 4, 2018 at 6:24pm PDT

Situated in the southern part of metro Atlanta, on 75 acres within the beloved former Lakewood Fairgrounds, this Lakewood Heights outdoor venue offers convenience and beauty. There’s plenty of parking lots surrounding the amphitheater, as well as convenient access to public transportation and a mix of seating options; in fact, concerts can hold up to 19,000 people, including 7,000 reserved seats and the rest on a sprawling general admission lawn. Since opening in 1989, the venue has hosted an endless scroll of big names, including Phish, Dead & Company, Dave Matthews Band, Pearl Jam, and Iron Maiden.

This cozy outdoor amphitheater is located just outside a tranquil residential neighborhood, within Atlanta’s verdant crown jewel: Chastain Park, a 268-acre urban greenspace oasis found 10 miles north of downtown. The State Bank Amphitheatre at Chastain Park has its own sparkling reputation, however: Opened in 1944, the 6,900-capacity space is considered the city’s oldest outdoor music venue, and has traditionally booked an eclectic calendar encompassing rock legends (Styx, Whitesnake) and up-and-comers (Billie Eilish, The 1975) alike.

As we prepare to send off 2018 @WidespreadPanichq style, comment below and share some of your favorite memories #AtTheFox from this year! #HappyNewYear We can’t wait to see you in 2019!✨🍾

For history and ambience, it’s tough to beat Midtown jewel the Fox Theatre. When the 4,665-seat venue opened in 1929, it was part of William Fox’s chain of “movie palaces” that showed the latest films of the day. Today, remnants of that storied past remain—notably the theater’s still-in-use Möller Theatre Organ and plenty of gorgeous, glamorous detailing—although the Fox’s healthy show schedule is decidedly modern. Expect musical acts that appeal to all ages—including Mariah Carey, Al Green, Greta Van Fleet, and Vampire Weekend—and a mix of comedians and Broadway hits (‘Dear Evan Hansen’).

The Atlanta Braves started playing their home games at the sparkling new SunTrust Park in 2017—the same year the adjacent Cumberland music venue Coca-Cola Roxy threw open its doors. Located in the Battery Atlanta, a hip entertainment enclave cultivated by the Braves, the open-concept 3,600-capacity venue has a seated balcony and a general admission floor, and books a wide variety of hip-hop (Anderson .Paak & The Free Nationals), country (Dan+Shay), and rock (Evanescence, Shinedown, Hozier) acts. Veteran ATL concert-goers will recognize that the venue’s name is a nod to the former beloved Buckhead venue that closed in 2008.

Loving this 🐦’s eye view of the Tab by @goellnerphotos! Be sure to tag us in your pics at #TabernacleATL! 💒

This historic downtown Atlanta space—opened in 1911 to house the Third Baptist Church—is just a hop, skip, and a jump from Centennial Olympic Park. After the congregation moved on, the venue eventually evolved into a destination for live music, but it retained historical flourishes such as its sturdy redbrick facade and colorful stained-glass windows. With a capacity of 2,600 and multiple balconies, the Tabernacle gives patrons perfect views of midsized acts, with a special emphasis on rock (Guster, Garbage, Bryan Ferry), electronica (The Prodigy, Adventure Club), and hip-hop (YG, A Boogie Wit Da Hoodie).

we recently completed a little facelift around the venue… 😍👏🆙

The Buckhead Theatre opened in 2010 in the former Coca-Cola Roxy Theatre space in the trendy Buckhead neighborhood. However, its origins date back to 1931, when the theater—which boasts art deco accents and Spanish-Baroque architectural flourishes — opened as a movie house. Today, the 8,000-square-foot Buckhead offers up to 1,800 patrons an up-close-and-personal view of comedians and musicians — including singer-songwriters such as Lucinda Williams, Ryan Bingham, and Kip Moore, along with full bands hewing toward the heavy (Meshuggah) to the jangly (Gin Blossoms).