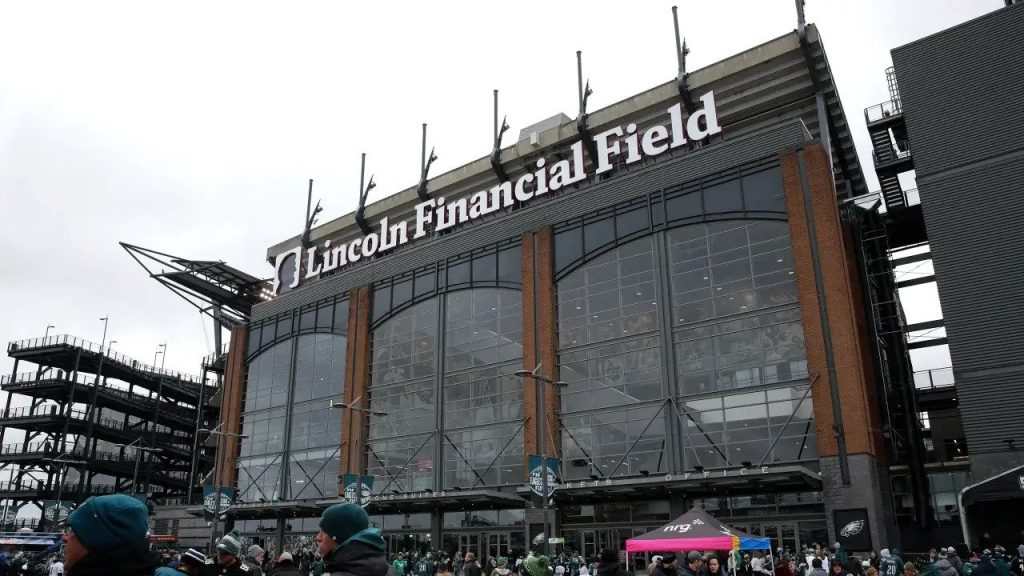 Philadelphia football fans are as passionate as they come, and an average of 70,000 attend every Eagles game at Lincoln Financial Field. Also known as The Linc, the team’s home stadium has a lot to offer including three open plaza corners with sweeping views of the city and shields from noise and inclement weather to enhance the game-watching experience. (This may be part of the reason it was chosen to host the 2026 FIFA World Cup.) While sports events and concerts are the stadium’s main attractions, locals and visitors alike have plenty pre- and post-game options to dine, drink and merry-make in the surrounding South Philly neighborhood, which are easily accessible by both car and public transportation.

What are the Best Bars & Restaurants Near Lincoln Financial Field?

You won’t need to travel very far to find a wide array of delicious pre- and post-game bites and beverages. Located in the heart of the sports complex, Xfinity Live! boasts 80,000 square feet of dining and entertainment, including Broad Street Bullies Pub, featuring memorabilia from the Philadelphia Flyers famed 1970s Stanley Cup®-winning hockey team; Lorenzo and Sons, known for its enormous slices of cheese pizza; and PBR Philly, where you can ride a mechanical bull and indulge in tasty Southern dishes as well as burgers and beers.

With a kiosk located inside Xfinity Live!, as well as several standalone locations throughout the city, Chickie’s & Pete’s is famous for its decadent crab fries and breaded cutlets as well as their love of the Eagles and immense team spirit. What’s more, they serve some of the best cheesesteaks near Lincoln Financial Field, including the classic (with or without onions) and a fancy lobster version, just a stone’s throw away from the stadium.

What is there to do after an event at Lincoln Financial Field?

As luck would have it, there’s a world of options right nearby, including a 24-hour casino with an array of dining possibilities, one of the city’s preeminent small concert venues, a world-renowned comedy club and a premier nightclub.

If you’re seeking some laughs, Punch Line Philly is only a few miles away and is part of Fishtown’s lively entertainment scene. The 300-seat venue hosts standup comedy from top comedians in an intimate setting and hosts an open-mic night. It also offers VIP seating, an outdoor patio and an extensive selection of food and beverages, including local craft beers, inventive cocktails and wines by the glass.

Go to the Casino

Rain or shine, 24 hours a day, 365 days a year, you’ll find Rivers Casino in Philly’s Fishtown neighborhood open to welcome you. Previously known as SugarHouse Casino, it houses delicious restaurants and inviting bars in addition to a plethora of gaming options. At Jack’s Bar & Grill enjoy classic American pub fare and an extensive cocktail menu with views of the Delaware River. Meanwhile, Mian restaurant offers authentic Asian dishes with fresh ingredients and quick service if time is of the essence. If gaming is your thing, try your luck at nearly 2,000 slot machines and gaming tables from poker to blackjack as well as sports betting. You can also catch performances from major musical acts including LeAnn Rimes and George Benson at the Casino’s state-of-the-art concert venue.

Rock Out at a Concert

The Theatre of Living Arts (TLA) has been one of Philly’s top live music destinations since it opened as a full-time concert venue in 1988. The building itself began life as a nickelodeon in the early 1900s and has since housed many different types of entertainment. Now it’s one of the best small venues in Philadelphia to see musical artists from a variety of genres — from local heroes The Roots to Andrew W.K. and Noah Cyrus. Surrounded by South Street’s specialty record shops and some of the city’s most renowned cheesesteak purveyors, it’s hard to go wrong for a fun night out on the town. If you’re planning on driving, be sure to read up on parking information for the venue.

In Center City Philadelphia, NOTO, which stands for Not of the Ordinary, is exactly that. This high-energy nightclub features international guest DJs spinning Top 40, EDM and hip-hop tunes. A full-service bar will fuel an unforgettable experience dancing the night away until last call. NOTO also hosts bachelor and bachelorette parties and private events. Be advised: You may want to bring a change of clothes for after the game as NOTO has a dress code that doesn’t allow sports attire or sneakers.