How to Survive a Concert Without Looking at Your Phone 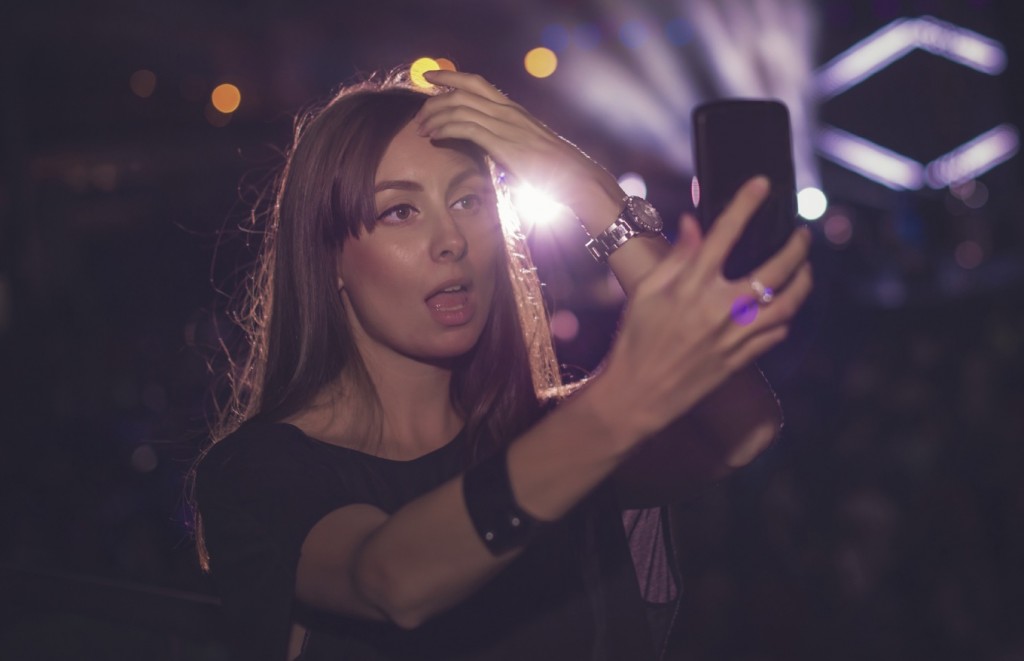 Concerts have certainly evolved with the times. A decade or two ago artists would look into the crowd and see people watching the show with their own eyes and holding up lighters. Now they see a bunch of cellphones being used to record, take pictures, or act as lighter replacements. This isn’t necessarily a bad thing, as technology allows us to enjoy and engage with concerts in new and exciting ways, but there is something great about truly being in the moment at a show without being worried about what’s happening on your phone.

Tip #1: Leave your phone in your pocket, bra, or bag — and forget about it.
It might seem like the most obvious tip, but it’s also the hardest. Step one for enjoying the concert without your phone is simply putting it away and pretending like it doesn’t exist until the concert is over. Out of sight is out of mind, so stashing your cell away can help you focus on what matters: the music. There will be people around you checking in on their phones nonstop, but don’t mind them.

Tip #2: If you need something to hold, grab a bottle of water.
Many of us have gotten so used to having a phone in our hand that we forget what to do when we no longer have one to fiddle with. If you need something in your hands at the concert, why not fill the void with a bottle of water? Keeping hydrated is much more important for your health and happiness than checking your texts. If water isn’t your style, bring a prop to hold throughout the night to deal with your phantom limb syndrome.

Tip #3: If you miss doing something with your hands, start rocking out.
Still need something to do with your hands?  Shake your booty, clap to the beat, or just do a little chair dance in your seat. You’re at a concert, after all — that’s the whole point!

Tip #4: Take a mental snapshot.
No one really does this anymore. Today it’s all about recording and taking pictures to have some concrete memento to share with others. But no picture or video will ever be as vivid as your memory. Take it all in with your own eyes, and if you want to see a picture or a video after the show, head to Twitter or YouTube.

Tip #5: If it’s an emergency and you need to text, put your screen’s brightness super low.
If something comes up and you simply have to text, take your phone’s brightness down a few notches so you won’t disturb the people around you. You may have failed the phone-free concert challenge, but if your screen is dim enough nobody will be the wiser.

Tip #6: Try to convert the other cellphone zombies.
Sure, you can go into this mission solo. But it’s really hard to do if your entire group is face-down in their smartphone apps the whole show. Dare them to go phoneless as well so they can be present in the moment with you.

Tip #7: Bring some awesome glow sticks or a lighter.
These days everyone likes to hold up their cellphone flashlights during the climactic moments of a concert. But there’s nothing wrong with going a little old school. Hold up a glow stick or a lighter and leave your phone stashed away.

Tip # 8: Photobomb other people’s pictures.
Want a picture to prove that you really went to a concert? Try jumping behind other people when they’re about to take a selfie, then search for it online later. You can help your chances of getting them to post it by making the craziest face you can muster.

Tip #9: Pay with cards or cash.
So you want to buy some food, drinks, and cool merchandise. You could be fancy and use your phone to pay for things, or you could stick to the phone-free plan and bring cash or a credit card. The choice is yours — stay strong.

Tip #10: Strike up conversation with fellow fans.
A lot of times when we’re on our phones at a show we’re talking to people elsewhere. But instead of interacting with people who aren’t at the show, why not try to make some new friends at the venue? Chatting with your neighbors about the band is an easy conversation starter — you may even find out that you share more than just awesome taste in music.

Tip #11: Bring a marker or pen in case you want to give out your number.
You met someone great. You want to exchange numbers. You need your phone for that, right?  Wrong. You can just give them your number and tell them to text you. If for some reason that isn’t an option, come equipped with a pen to write it down on a napkin or even their arm. You’ll probably stand out more for not being just another number in their phone with “from ___ concert” after your name.