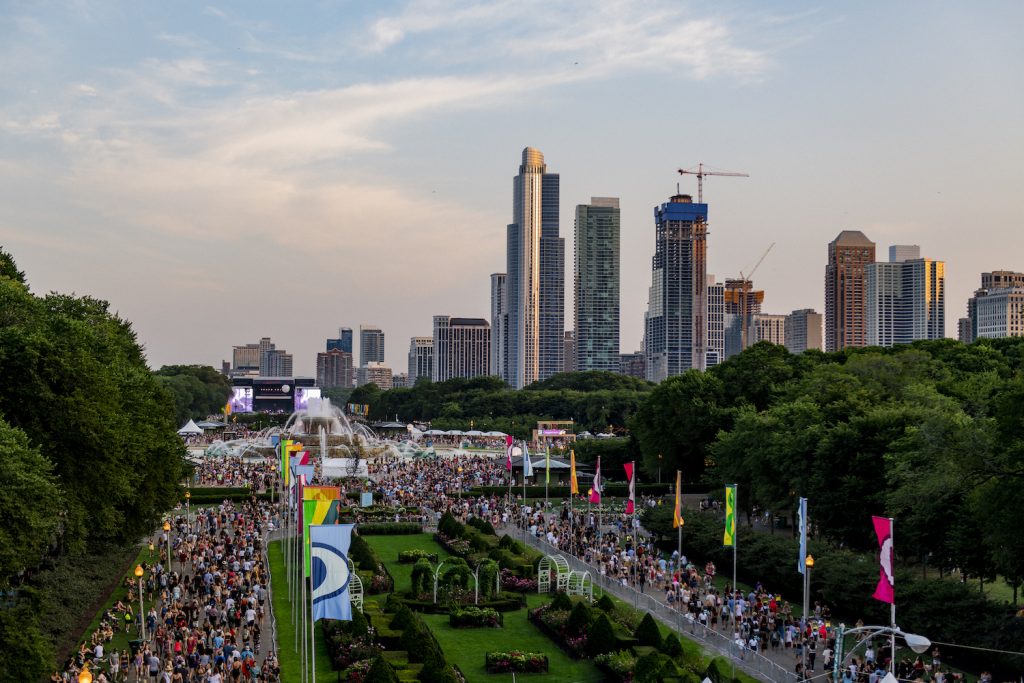 Like any self-respecting almost-30-year-old, Lollapalooza has done a lot of growing up since its infancy. As the brainchild of Jane’s Addiction frontman Perry Farrell, the original ‘90s iteration of Lollapalooza was envisioned as a traveling carnival that gathered misfits of all stripes — from punks and goths, to gangsta rappers, to circus freaks who could feed seven feet of plastic tubing through their noses and into their stomachs.

After the alt-rock revolution waned, Lollapalooza underwent an extreme makeover in the mid-2000s, reinventing itself as an annual weekend gathering at Chicago’s Grant Park that attracts the biggest names in pop. With nearly 200 acts spread across its dense ecosystem of stages, Lollapalooza remains, first and foremost, a place for music discovery, where niche artists can play to their first large audience en route to becoming the superstars of tomorrow.

On the eve of the festival’s 2020 virtual edition, let’s look back at the evolution of Lollapalooza through 9 of its most memorable moments.

It’s common for the bands at the bottom of an all-day festival bill to play for a thinner crowd. But that wasn’t the case in 1992. When Pearl Jam were initially booked to play Lollapalooza, they were still building word-of-mouth buzz one club gig at a time, and were thus scheduled into one of Lolla’s early, mid-afternoon slots. But by the time the festival hit the road in the summer of ‘92, their mega-selling debut, Ten, had made them one of the biggest bands in America, and the tour essentially served as their basic training for a future spent playing arenas and amphitheaters in perpetuity (though the opportunities to see a crazed Eddie Vedder scale a stage scaffolding became more scarce).

In 1993, rising LA rap-metal combo Rage Against the Machine became the first band to make the leap from Lollapalooza’s side stage (which they played the previous year) to the main stage, and they proved they could more than hold their own alongside the big boys. However, the gig that made the most noise was the one where they didn’t make any. When the band rolled into the tour’s Philadelphia stop, frontman Zack de La Rocha was suffering from blown-out vocal cords, but instead of canceling their set, the band opted to stage a protest against Tipper Gore’s Parents Music Resource Center (the pro-censorship watchdog organization responsible for getting that “Parental Advisory” sticker slapped on the cover of Rage’s self-titled debut). And this wasn’t your typical say-it-loud, say-it-proud protest: The band took to the stage sporting black duct tape over their mouths and the letters “PMRC” scrawled on their chests — and nothing else.

Compared to previous editions headlined by alt-rock A-listers like the Red Hot Chili Peppers and Smashing Pumpkins, Lollapalooza’s 1995 lineup rolled the dice with more esoteric acts like Sonic Youth, The Jesus Lizard, and Pavement. While the latter group were bona-fide indie-rock darlings at the time, their brand of skewed fuzz-pop wasn’t what the mosh pit was in the mood for. At the Charles Town, West Virginia, stop, the restless crowd subjected the band to a relentless barrage of mud bombs, prompting them to walk offstage with middle fingers aloft.

Following 1995’s indie-leaning (and financially underperforming) tour, Lollapalooza swung hard in the other direction the following year by booking the freshly shorn Metallica as its headliner. For many festival faithful, the appearance of the most popular metal band in the world felt like a betrayal of Lolla’s original mission to promote the freaks on the fringes. But in hindsight, it was a harbinger of the festival’s long-term survival strategy: go big or go home.

By 1997, the roving-festival model that Lollapalooza pioneered had caught on in North America, with events like Lilith Fair and H.O.R.D.E. muscling in on the summer concert circuit. And with nu-metal and electronica supplanting alt-rock as the soundtrack of choice for disgruntled teens, Lolla would go on hiatus for the next six years. But in 2003, to celebrate the release of Jane’s Addiction’s first new album in 13 years, Strays, Farrell put the show back on the road for a 30-city tour, and the dream of the ‘90s was rebooted for the 21st century.

Since 2005, Lollapalooza has parked itself at Chicago’s massive Grant Park, with a mission to present the biggest acts in the world, from The Killers to Kanye. But since becoming a site-specific event, Lollapalooza has also greatly expanded and diversified its programming over eight stages. And the festival’s smaller stages regularly play host to the next big thing — like Lady Gaga, who performed a Saturday-afternoon set on the tiny BMI Stage in 2007 before returning to Lollapalooza three years later to play for a slightly bigger crowd.

Kanye West first headlined Lollapalooza in 2006 for what should’ve been a grand homecoming coronation to celebrate his ascent to America’s premier rapper/producer. Instead, the set was marred by technical difficulties and onstage tantrums. But when Kanye returned two years later — with a blinding assault of flashing lights to complement the electro-pumped beats of Graduation — he proved that whatever don’t kill him can only make him stronger.

Sure, Lollapalooza welcomed Daft Punk as a main stage headliner in 2007, but the appearance of deadmau5 in a similarly lofty position four years later signaled a dramatic sea change in the festival’s programming, and popular music at large. With the masked mixmaster attracting a heaving sea of revelers even as the rains came pouring down, Lollapalooza officially entered the EDM era, where names like Skrillex, Calvin Harris, and Major Lazer would become fixtures at the top of the festival poster.

At this point, Lollapalooza has been a Windy City fixture long enough for a whole generation of Chi-towners to have grown up with the festival in their backyard. So when South Side native Chance the Rapper headlined in 2017 (for what is believed to be the largest crowd in Lolla history), it showed local kids that Lollapalooza was more than just a place to see the most popular acts of the day — it’s the place where dreams come true.

The Best Lollapalooza Photos of 2019

Revisit all the best photos of Lollapalooza 2019.