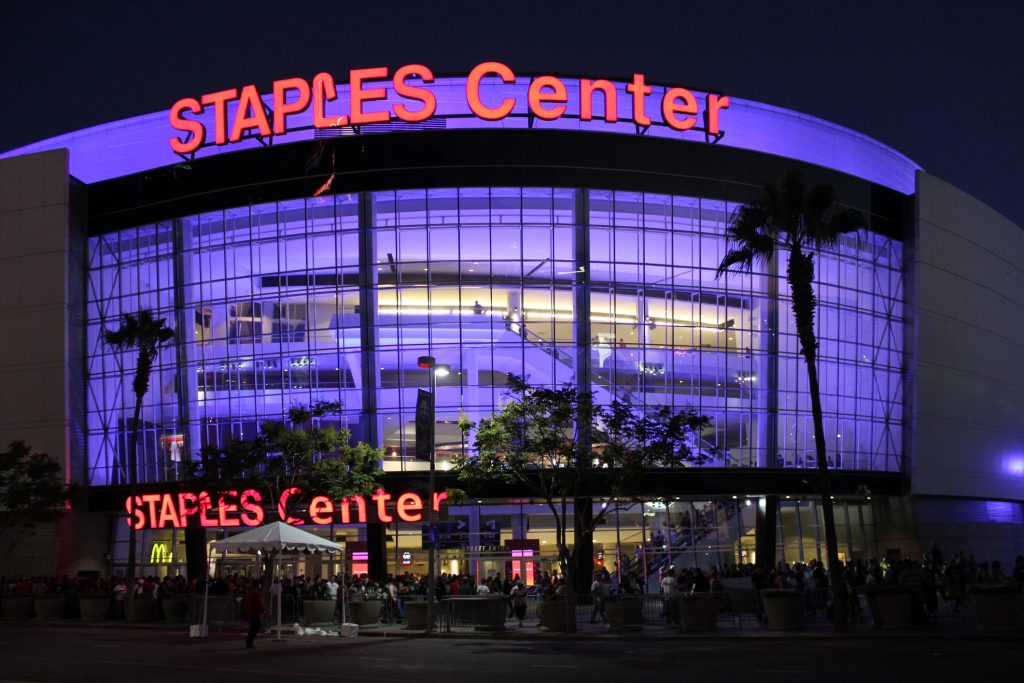 Opened on October 17, 1999, with a performance by Bruce Springsteen and the E Street Band, the STAPLES Center is the premier indoor sports arena in the greater Los Angeles area. It’s also one of the preeminent venues in all of sports as the home of the NBA’s Lakers and Clippers, the NHL’s Kings and the WNBA’s Sparks. Built at a cost of $375 million, STAPLES seats around 19,000 for basketball and closer to 18,000 for hockey. More than 840 flat-panel TVs throughout the venue, along with a state-of-the-art sound system, means guests never miss a moment of the action.

The STAPLES Center had the task of replacing two legendary local arenas – the Fabulous Forum in Inglewood, and the Los Angeles Memorial Sports Arena in the University Park section of Los Angeles – and has succeeded beyond expectations for nearly two decades of operation.

Three more days until Country’s superstar @CarrieUnderwood is here on her #CryPrettyTour360. What is your favorite Carrie song?

For nearly two decades, STAPLES Center has been home to the NHL’s Los Angeles Kings, the WNBA’s Sparks and the NBA’s Lakers and Clippers. All of these teams have enjoyed success in this building, starting with the Lakers’ incredible run of seven Western Conference championships and five NBA titles from 2000 to 2010. The Clippers have held their own with several deep playoff runs and the 2013 and 2014 Pacific Division titles, and have firmly established Los Angeles as a two-team town for men’s basketball. The Los Angeles Sparks have also had their share of glory, winning three WNBA titles at the STAPLES Center, in 2001, 2002 and 2016. And the Los Angeles Kings have had their greatest period of success while calling the arena home. STAPLES also frequently hosts NCAA Division I Men’s Basketball Tournament Sweet Sixteen and Elite Eight games.

Throughout the year, the STAPLES Center is Los Angeles’ go-to destination for nearly any form of entertainment, and it often finds itself on the national and world stages. In 2000, it hosted the Democratic National Convention, and will also be the basketball venue of the 2028 Summer Olympics. It has twice hosted both the NBA All-Star Game and the NHL All-Star Game. Since the year 2000, the STAPLES Center has hosted all but two Grammy Awards ceremonies. WWE wrestling has also been a mainstay, with the arena hosting WrestleMania XXI in 2005; it was also the home of SummerSlam from 2009 to 2014, and the host of 2018’s Survivor Series pay-per-view.

Some of the greatest names in music and other forms of entertainment have performed at STAPLES Center since its opening, from Sir Paul McCartney and Madonna to Katy Perry and Lady Gaga. The STAPLES Center has also hosted such diverse events as Disney on Ice, the Professional Bull Riders tour and the Harlem Globetrotters.

Happy #PrideMonth from your friends at STAPLES Center! 🌈🌈

It’s just fine to show up with an appetite; STAPLES Center includes 23 refreshment stands, ranging from places to grab a beer and a hot dog to the Smokehouse BBQ on City View Terrace, which, as its name suggests, features mouthwatering food options to enjoy while taking in the gorgeous L.A. skyline.

The center, however, is just one element of the sports and entertainment hub of downtown Los Angeles, a development known as L.A. Live. The Microsoft Theater (formerly the Nokia Theater) is the permanent home of the Primetime Emmy Awards and other ceremonies, and will be the weightlifting venue for the 2028 Summer Olympics. ESPN’s West Coast operations also operate from L.A. Live, airing late-night broadcasts of SportsCenter. The Grammy Museum is another fine attraction at L.A. Live, highlighting the legacy of music’s premier awards ceremony right next to its permanent venue.