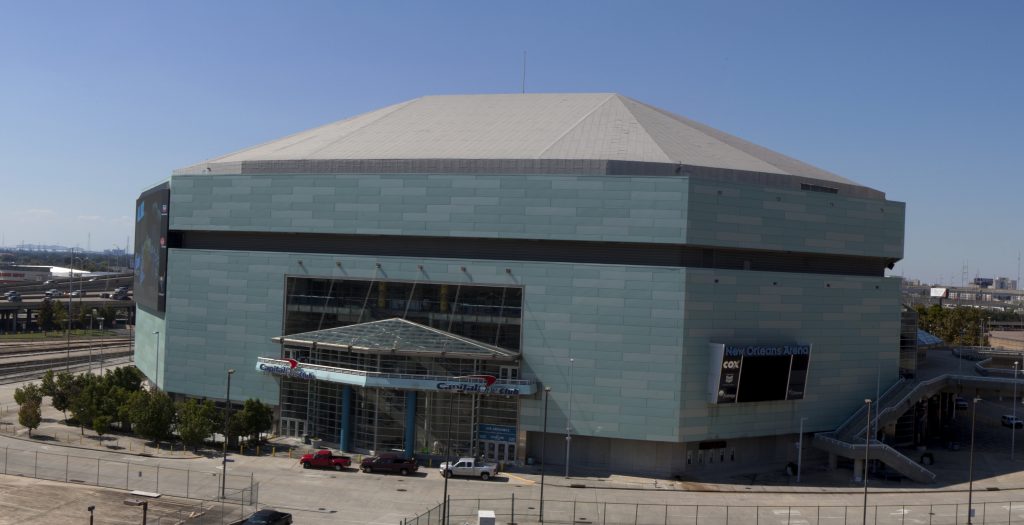 In the arts and entertainment mecca that is New Orleans, Smoothie King Center is the premier indoor arena. It’s conveniently located in the heart of Crescent City, just over a mile away from the French Quarter and the Ernest N. Morial Convention Center, and ten miles away from Louis Armstrong New Orleans International Airport in nearby Kenner. The arena has a capacity of 16,867 for regular season NBA games, 18,500 for the NBA Playoffs and college basketball games and up to 17,791 for concerts, based on a 360-degree configuration. The Smoothie King Center is accessible by public transportation via Greyhound and Amtrak at the New Orleans Union Transportation Terminal, where fans can connect to the Rampart-St. Claude Trolley, which leaves fans off at the Poydras Street station. The arena is also accessible by car via the Pontchartrain Expressway, U.S. Route 90 and Interstate 10.

The @pelicansnba are back and we couldn’t be more excited for this season! #wbd #wontbowdown

When the Louisiana Superdome opened in 1975, the stadium was built to also function as the city’s major indoor arena, with the NBA’s New Orleans Jazz playing at the dome until moving to Salt Lake City in 1979. Over the years, it became clear that a world-class indoor arena was needed to accompany the city’s world-class stadium, and on November 30, 1995, ground was broken adjacent to the Superdome for what was originally known as the New Orleans Arena. The $114 million arena opened in 1999 with the New Orleans Brass of the East Coast Hockey League as its primary tenant, with the team folding in 2002 upon the relocation of the Hornets to New Orleans. The New Orleans VooDoo of the Arena Football League also had three stints at the arena between 2001 and 2015, and hosted the ArenaBowl in 2007, 2008 and 2012.

The Smoothie King Center was put to the test in August 2005, when Hurricane Katrina infamously made a direct hit on New Orleans. The arena suffered relatively minor damage compared to the nearby Superdome and the Ernest N. Morial Convention Center and it reopened within a month, but the surrounding area was flooded to an extent that made hosting Hornets games nearly impossible. The Hornets spent most of their 2005-’06 and 2006-’07 seasons at the Ford Center in Oklahoma City, playing a handful of games in 2006-’07 before permanently returning to the Crescent City for the 2007-’08 season.

In 2002, Charlotte Hornets owner George Shinn moved his franchise to New Orleans, leading to a naming controversy similar to when the Jazz kept their nickname in Utah. Both the NBA franchise and the arena underwent rebranding in the early 2010s, with the Hornets becoming the New Orleans Pelicans in 2013 (and the Charlotte Bobcats eventually becoming the Hornets), and Smoothie King beginning a 10-year naming rights deal with New Orleans Arena in 2014. The arena has hosted three NBA All-Star Games: in 2008, 2014 and 2017. Before the 2014-’15 NBA season, the center underwent a $54 million renovation, featuring new entrances and box offices, in addition to exterior repainting and renovations to clubs and suites.

Thank you @jonasbrothers for taking us to the year 3000 for a night! 🔥#HappinessBeginsTour

The Smoothie King Center has been the host for many exciting sporting events, including the NCAA Division I Women’s Volleyball Championship in 2002, Professional Bull Riding events, and the Big 3 basketball tournament. WWE has made its presence known at the SKC from the beginning, hosting the 2001 Royal Rumble, the 2014 WWE Hall of Fame induction ceremonies, and numerous episodes of WWE RAW, including the nights after the Superdome hosted WrestleMania XXX and WrestleMania 34. The arena has also become a destination for women’s college basketball as the host of the NCAA Division I Women’s Final Four in 2004, 2013 and 2020, in addition to hosting men’s March Madness games in 2007, 2010 and 2011. The Smoothie King Center is also a top destination for concert-goers, with such famous acts as Cher, The Jonas Brothers, Fleetwood Mac, Elton John and Tyler Perry passing through.

Situated near the Smoothie King Center and the Mercedes-Benz Superdome is Champions Square, which opened in 2011 and was built on the site of the New Orleans Centre mall. Champions Square is a great place to meet up before and after a game, with free concerts held regularly and in conjunction with major events. New Orleans is known the world over for its cuisine, and the area in and around the Smoothie King Center continues this tradition. The arena itself carries such vendors as cultural institution Zatarain’s, Krispy Krunchy Chicken and (of course) Smoothie King, as well as LA Seafood, Geaux Mac and the Sweet Shack. Those looking to quench their thirst can look forward to such bars as Dixie Bandstand and the Rebound Lounge on the 300 Level, and the Dixie Tap Room and Craft Beer Bar on the 100 Level, as well as Big Easy Daiquiri on both levels and alcoholic and non-alcoholic beverages available at most concession stands.