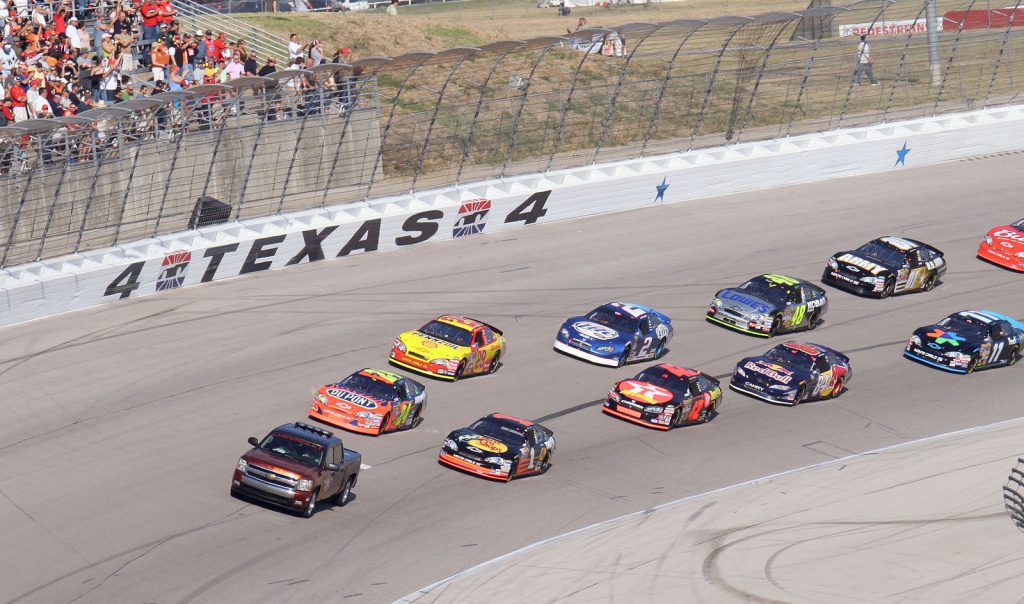 Fort Worth’s Texas Motor Speedway is where the fastest and most furious come out to play. This 1.5-mile oval track is home to some of the biggest NASCAR events in the country, including the annual O’Reilly Auto Parts 500 and the AAA Texas 500, along with a number of other races like the IndyCar Series. When cars aren’t burning up the track, the speedway hosts several other gatherings, including auto shows, swap meets, outdoor expos and an occasional concert or two. To get a full view of all the action, what’s known as  “The Great American Speedway” boasts “Big Hoss,” one of the world’s largest video screens at 218 feet wide and 94.6 feet tall. The entire facility also has enough lighting to illuminate multiple NFL stadiums, because everything’s bigger — and brighter — in Texas, of course.

What year was this photo taken? #NASCAR | #TBT

Sitting on 1,500 acres, Texas Motor Speedway opened in 1996 in the northern Denton County region of Fort Worth. It was built to fit over 180,000 spectators — that’s nearly twice as many as the Dallas Cowboys’ nearby AT&T Stadium. The track was constructed with an oval design that measures 1.5 miles.

Things got off to a rocky (or rather soggy) start when heavy rain flooded the parking lots and caused cancellations at the speedway’s inaugural Sprint Cup race. Since, the Texas Motor Speedway has seen plenty of sunshine and record-breaking speeds to become a premier venue for all types of racing. At times, it’s even been the fastest track on the NASCAR circuit with speeds reaching 200 mph. The shape has been slightly tweaked over the years to make the turn-to-straightaway transitions easier on the cars. In fact, a fix in turns 1 and 2 came about in 2007 when racing legend Dale Earnhardt, Jr. noted a problematic dip in the track (dubbed “Dale’s Dip”).

The speedway has kept up its state-of-the-art reputation, too, being the first motorsports arena to have a lap counter that counts both down and up, and the first to install WeatherSTEM technology to provide real-time weather data. The 20,622-square-foot “Big Hoss” video screen was the largest HD LED screen in the world when it was added in 2014.

Along with the main track, the speedway also features an infield road course, a 0.4-mile clay-surfaced dirt track and the 0.2-mile oval Lil’ Texas Motor Speedway.

The speedway offers special packages including a Racing Electronics scanner and headsets so that you can listen in on the live action and commentary between drivers and their crew. To truly step inside the speedway, you can organize a tour, which will take you behind the scenes at Victory Lane, where drivers celebrate their wins, and at Pit Road, where a change of a tire can make or break a race.

For all events, the speedway provides an extra bonus: all general parking is free.

Now open for race weekend, Torchy's Tacos in the infield! Stop by for the great queso, even better tacos and awesome drinks today til 8pm!

There’s no need to race to the concession stands since food is in abundance throughout the speedway. Grab some traditional American classics like hamburgers, hot dogs, fries and nachos, plus sugary treats such as funnel cakes, ice cream, snow cones and cotton candy. For the more adventurous eater, there’s the sinful Hawg Heaven line of bacon-filled eats, like the Bacon Cotton Candy, Bacon Nachos and the formidable Brisket Dawg, which packs in a half-pound Black Angus frank with Texas BBQ brisket, cheddar cheese, spicy fried pickles and candied bacon bits, all slathered with a bacon ranch sauce.

During major race weekends, spectators with infield access passes can also check out Torchy’s Tacos, a Lone Star State institution, to indulge in a wide range of tacos and the fan-favorite green chile queso with chips.

You can even make a pit stop at the speedway’s very own 7-11, located just outside turn 3, to pick up snacks and drinks, along with a sixpack from the walk-in refrigerated Beer Cave. The store is open 24 hours a day, which is important for any visitors setting up camp for an action-packed race weekend.