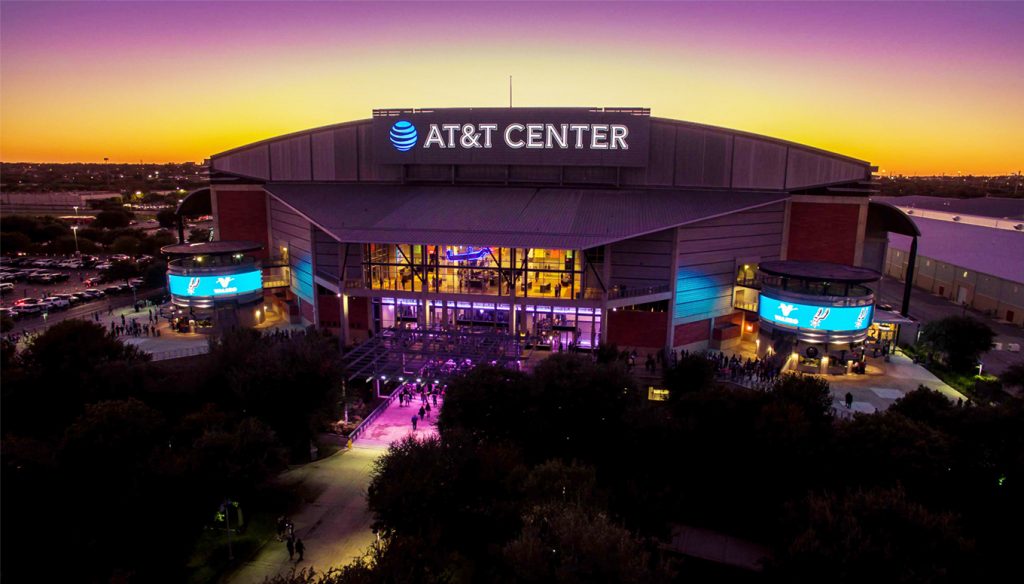 The AT&T Center in San Antonio is a year-round hub for some of the best sports and entertainment in Texas. Opened in 2002, the indoor arena is the home of the NBA‘s San Antonio Spurs.

Additionally, the AT&T Center, which is located on the east side of San Antonio a mere ten minutes from downtown, hosts concerts from an eclectic array of musicians, including Luke Combs, Harry Styles, Cher and JoJo Siwa, as well as wrestling and monster-truck events. The annual San Antonio Stock Show & Rodeo — which is regularly recognized by the Professional Rodeo Cowboys Association for being the best large indoor rodeo — rounds out the AT&T Center’s diverse slate of offerings.

Prior to moving into the AT&T Center, the San Antonio Spurs played in the AlamoDome, a legendary indoor venue that could hold close to 40,000 people for basketball games. However, when the Spurs recognized the need to be in a more modern facility, they opted to team up with several stakeholders for construction of a new arena.

The AT&T Center was built right next to the Freeman Coliseum on the city’s east side and opened in 2002 as the SBC Center before being renamed in 2006 due to SBC’s merger with AT&T. In 2015, the AT&T Center completed more than $110 million in renovations, which included new seats and upgraded concessions, high-definition TVs, LED displays and screens, and a massive, video-driven scoreboard.

The arena’s current basketball capacity is 18,418, while the space can hold around 19,000 fans for concerts. Hockey games can draw up to 16,151 people, meanwhile, although cordoning off sections with a curtain drops the maximum capacity to 6,374. Further commercial development in the area surrounding the arena is in the works.

@ironmaiden ended their final US tour stop at the AT&T Center with a bang! 🎸💥 • • Thank you for bringing the energy, San Antonio! 📸: @hrv_images

Each year, the AT&T Center is also home to the San Antonio Stock Show & Rodeo, an 18-day event that features not just a variety of rodeo events, but also a carnival, live music, shopping and an abundance of food and drink. During other times of the year, the venue also hosts family-geared events such as Shrine Circus and Hot Wheels Monster Trucks Live, as well as various wrestling events, such as WWE Monday Night Raw.

The AT&T Center was previously the home of the San Antonio Stars, the WNBA franchise that moved and became the Las Vegas Aces in 2018. From 2013 to 2018, the rock ‘n’ roll-heavy music festival River City Rockfest was also held on the outdoor grounds of the AT&T Center.

No matter what your tastes, the AT&T Center offers something to whet your appetite. For a sit-down experience, the SWBC Terrace Club Restaurant dishes up salads, entrees and dessert. (Just be sure to make a reservation for the dining room in advance.) On the arena’s Charter Level, fans will find two sports bars, Frost and Dahill Saddles & Spurs Clubs, while Rock & Brews — a hearty restaurant and bar founded by Gene Simmons and Paul Stanley of KISS, a band that’s also played the venue — offers family-geared fare and indoor and outdoor noshing. For good measure, AT&T Center also has an outpost of the beloved Texas fast-food chain Whataburger.

Concessions-wise, the arena also has much to offer in addition to stand-by favorites such as hot dogs, chips and soda. Specialty outpost The Big Cheese dishes up delectable grilled cheese, while the Spud Spot sells loaded baked potatoes and other tater delights. Elsewhere, fans will find build-your-own taco or loaded nachos stations, or giant bottomless popcorn tubs.

Starting with the 2019-’20 season, the AT&T Center offers Spurs Steals — a menu of food and drink items at bargain prices — and one-of-a-kind offerings for special fan nights at Spurs Games, such as a margarita resembling Baby Yoda for Star Wars Night, or a cooking demonstration from decorated Chef Johnny Hernandez for Hispanic Heritage Night.