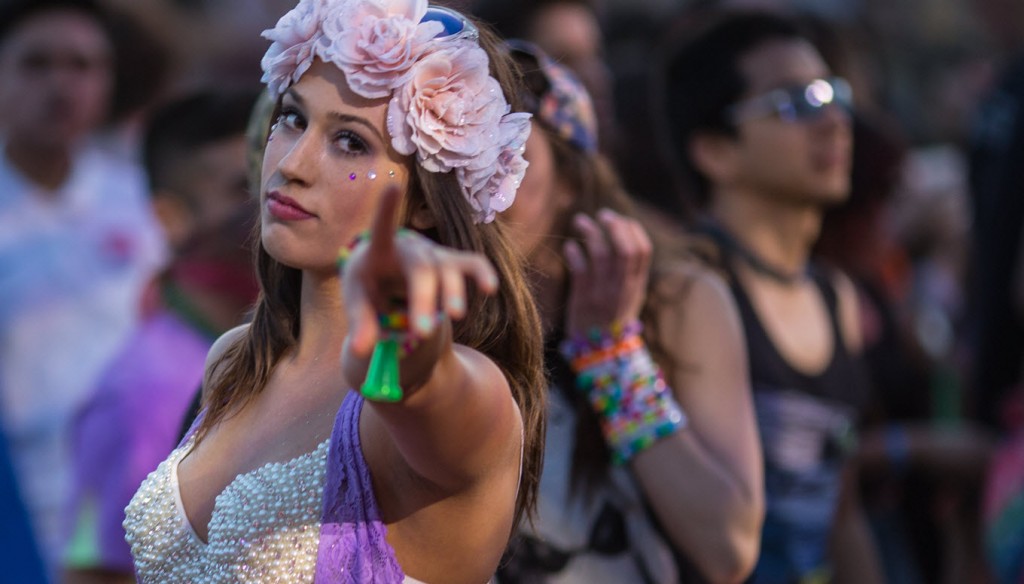 Music festivals are working harder than ever to cram as many awesome activities as they can into one weekend of sheer bliss. It’s no surprise that people are flocking to these events in droves, not just for the great music but also for the free-spirited culture that festivals encourage. To celebrate the start of the true festival season, we’re walking you through the 9 people you can find at every fest.

With more glow rings than a Disneyland Main Street parade, it’s virtually impossible to miss this group in the tent. They’re typically right in the middle of the action dancing the night away. The only time they stop is to reapply their florescent eyeliner or to take group selfies with the stage in the background.

This “lumbersexual” is a cross between a Calvin Klein model and a grunge fan, typically clad in flannel and sunglasses with an immaculately groomed beard. Expect to see this guy on the outskirts during the rowdier bands, waiting until he can rush to the front to hear his personal favorites. Not to be confused with an actual lumberjack.

Thanks to the all-ages nature of many festivals, you’ll see some diehard punk kids running around the festival grounds waiting to hear whatever incarnation of Black Flag is playing. They’re usually moshing at the front, but never too far from their skateboards—which they need to ride back to the metro station after the show.

Just as devoted as the young punks, the old punk will be right up front with them. He probably saw the original lineup of Black Flag and takes every opportunity to mention it. It’s always nice to have him around to show the young punks how it’s done.

When you need to do yoga, you shouldn’t let the flow of foot traffic get in your way. Usually arriving while the first bands are playing in the AM, three to four yogis will be low lunging like nobody’s business on whatever open grassy area is available.

Wait a second: that’s not a horse! It’s two men dressed up like a horse! Every festival needs some lighthearted shenanigans to shake up the status quo. They’re usually as simple as someone wearing angel wings or a tiger tail, but sometimes they’re full on gag costumes like the one below.

One of the highlights of going to festivals is delicious and unexpected food combinations (like a watermelon, feta, and mint salad) from boutique food trucks. The masterminds behind these foodie fusion freak outs are usually busy grilling carnitas or kimchi (or both), but you can occasionally catch them taking a break beside their trucks and listening to the show.

The beach ball crew enhances your positive vibes by bouncing this innocuous ball of joy off your head and on to the next unsuspecting concert goer. Will the fun ever stop? Not as long as this floating fun bubble is in the air.

Remember the Bedazzler? Or maybe you’re on the hunt for a really cozy knit sweeter? Any kitschy or contemporary trend that you want is available in the arts & crafts bazaars at many festivals. The proprietors are usually fabulously dressed and have no problem wearing their own merchandise. Speaking of crafts from the past, Perler Beads are also making a major comeback in the EDM festival scene. These handmade accessories adorn festival-goers in unique colors, patterns and styles.