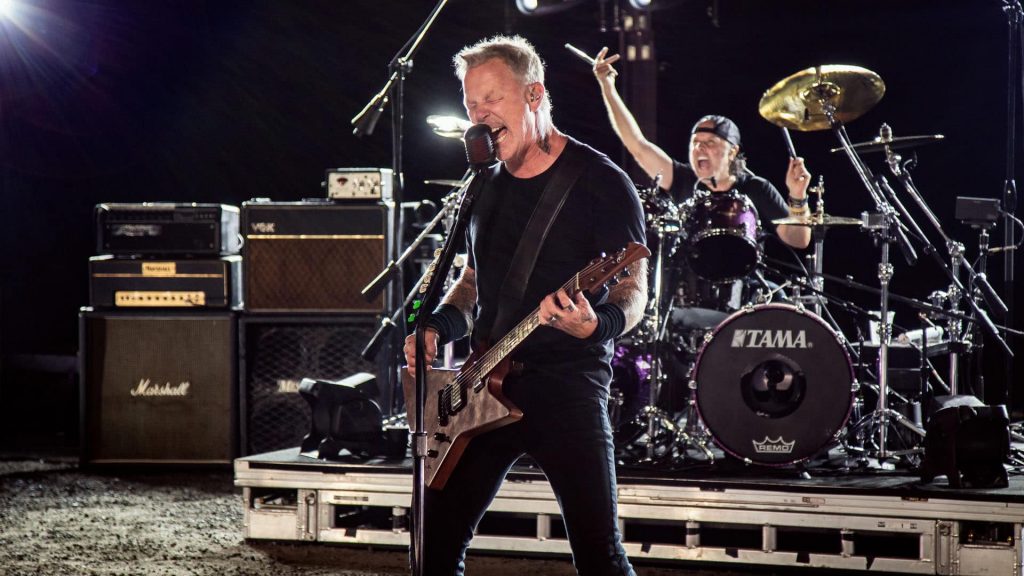 If there’s one force in this world that never seems to change, it’s music fans’ powerful drive to see their favorite artists perform — a drive matched only by those artists’ desire to put on an amazing show. In recent months, country heroes like Garth Brooks and Blake Shelton staged pre-recorded drive-in concerts for theaters across North America, and on August 29, Metallica — one of the biggest touring bands in history — reaffirmed their relentless energy when they embraced the drive-in format.

James Hetfield, Kirk Hammett, Lars Ulrich and Robert Trujillo filmed their show in secret a couple of weeks earlier at the Gundlach Bundschu Winery in Sonoma, CA, loading their set with classics but leaving room for songs from all across their career, including milestones like “Enter Sandman” and “Nothing Else Matters” as well as newer tunes like “Hardwired.” Featuring an opening set from Canadian rockers Three Days Grace, Metallica’s drive-in concert took over outdoor screens all over the country, where overjoyed fans rocked out in the safety of their cars for the first Metallica performance since September 2019’s S&M2 (Symphony and Metallica) shows in San Francisco. We got the scoop straight from the mouths of Metallica lovers about how it all went down.

Thank you to everyone across North America who rolled out to their local drive-in last night. It was amazing getting together and playing again a few weeks ago when we filmed this and hope that you enjoyed this unique Saturday night at the drive-in with your friends in Metallica. #pandemica

Some hardcore fans with plenty of Metallica shows under their belts found the event a welcome experience, like Diana Rosa Gehrum, who’d seen the band eleven times previously and caught the concert at Amelia, OH’s Starlite Drive-In. “I felt that the presentation given to hallmark songs like ‘One,’ ‘For Whom the Bell Tolls’ and ‘Master of Puppets’ was uniquely nostalgic,” she says. Keeping it all in the family, she was excited about “seeing it with my daughters, who grew up singing hits like ‘Enter Sandman,’ but also introducing it to my grandsons.”

Scott Kaiser, who came to the Bel-Air Drive-In Theater in Versailles, IN, for the show, is a veteran of Metallica concerts since the ’80s. “They were definitely tight,” he reports, “some of the best performances of the standard tunes I’ve seen. James’ vocals were some of his best, Kirk and Tru’s work was perfect and Lars was killing it all night. Probably my favorite moment of the night was ‘Fade to Black.’ This is one of my top favorites and have seen it many times over the years, but last night was probably the best one I’ve seen yet.”

“Hanging out with my brothers and cousins to Metallica blasting from our car speakers was just what we needed.“

But for fans that had never seen Metallica perform before, this unusual setting turned out to be an awesome introduction. Describing his experience at Maryville, TN’s Parkway Drive-In Theatre, Tony Preston admits, “I wasn’t sure beforehand how it would go, but afterward I was really pleased. People were into it and having a good time, holding up lighters and clapping and cheering. It was nice to see and be a part of [it] after all that’s been going on.”

Tim Roberts has been a fan since the ’80s, but going to the Coxsackie Hi-Way Drive-In Theatre in New York was his first time seeing the band perform. “The drive-in screen made it seem like we had almost front-row seats,” he says. “We had a [lightning] storm to the side for most of it so the background was a super-cool storm along with the awesome music. People were screaming ‘Ride the Lightning’!”

After attending the event at a pop-up drive-in in Harrison, MI, Andrea Swan appreciated the production values, noting, “The videography was on point, showing great close-ups of the musicians getting down on their instruments at the right moments.” But she was caught up in the spirit of the crowd, too. “There was great audience participation, even though the act was on a screen. Hoots, hollers, singing along and even the new addition of car honks went throughout the sets, just like an in-person concert.”

“The atmosphere was awesome,” agreed Danny Arguelles, who was at San Diego’s Encore Drive-In. “People singing along to the screen was fun to watch. Hanging out with my brothers and cousins to Metallica blasting from our car speakers was just what we needed.”

Shot at HQ earlier this month during #Pandemica rehearsals. See us on Saturday at drive-ins across North America with our brand-new concert film. Tickets available now… LINK IN BIO!

“It was what we needed for this summer,” confirms Michelle Smith Dameron, another Starlite Theater visitor. “We really enjoyed the night out with company, and we were able to socially distance. I was so glad that my sixteen-year-old and twenty-one-year-old were able to go with me.”

Don Wilson went to Beaufort, SC’s Highway 21 Drive-In and came away feeling that the band rose to the challenge of the unusual circumstances, with Hetfield sounding “absolutely perfect,” and Wilson added that “Kirk, Lars, and Robert were spot-on.” Longtime fans Nathalie Bossé and her spouse, watching at Ontario’s Mustang Drive-In, felt some national pride at seeing fellow Canucks Three Days Grace opening the show. “Having seen Metallica live in concert a few times before, it seemed somewhat surreal to attend a pre-recorded concert in a drive-in theater,” Nathalie confessed, “but all in all, it turned out to be a fun and enjoyable experience, one we would repeat for sure!”

Viewing the action from Sin City at the West Wind Las Vegas Drive-In, Josh Freeman summed it all up by saying, “The concert, I felt, was Metallica’s way of keeping in touch with their fans… even though we can’t see them at a concert in person, they gave us a way to connect with them [and] enjoy their music.”