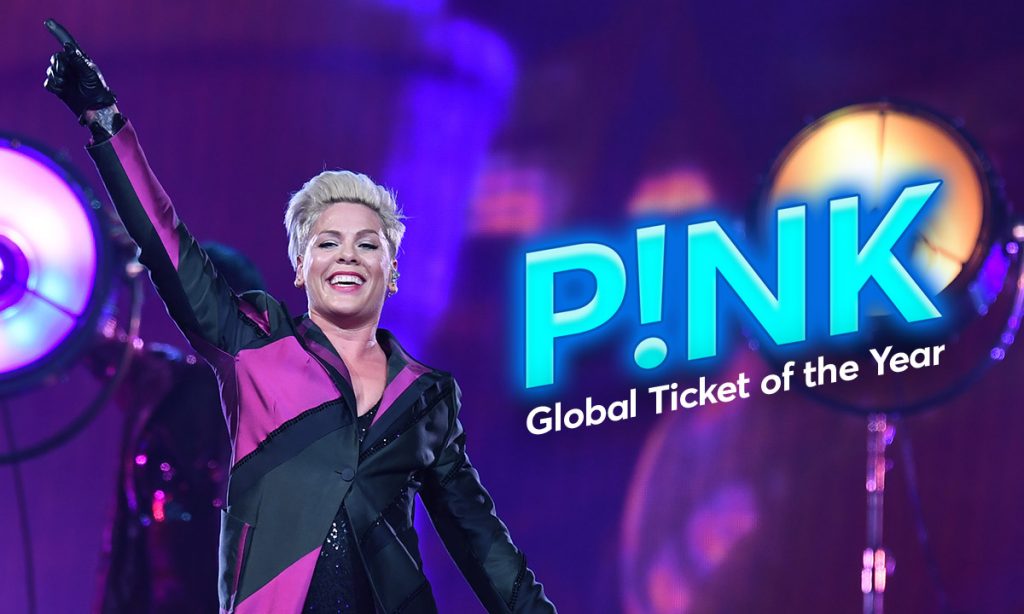 Pop icon P!nk, with her soaring acrobatics and vocal prowess, has officially won Ticket of the Year. Thrilling audiences across America, Australia, New Zealand and Europe throughout her Beautiful Trauma world tour, the star proved that she is a force of nature that cannot be contained by geography.

Executing adrenaline churning physical feats on — and above! — stage while treating faithful fans to new and classic hits, the artist put on a show for the entire world and received unanimous praise everywhere she performed. The three-time GRAMMY Award winner, who released her eighth studio album Hurts 2B Human in April, tallied up a record 157 shows worldwide.

About the Ticket of the Year win, the pop star said, “What an honor! I had such an incredible team and touring family as part of the Beautiful Trauma World Tour. We worked really hard to create the best show we could for all the fans and I’m so proud of all of us.”

In the U.S., The Rolling Stones took home Ticket of the Year, proving that rock and roll is truly ageless. All tour long, the 57-year-old band played classics like “Street Fighting Man,” “You Can’t Always Get What You Want,” “Sympathy for the Devil” and “Jumpin’ Jack Flash,” while Mick Jagger sauntered up and down the stage with his vivacious attitude. Meanwhile, Keith, Ron and Charlie did what they do best — give fans unforgettable experiences.

Meanwhile in Canada, Sir Elton John won Ticket of the Year for his acclaimed Farewell Yellow Brick Road tour, which encompass more than 300 concerts over the course of three years, in just about every corner of the globe. But his Canadian fans felt a special connection to the legendary performer. Elton John‘s had so many huge hit singles (not to mention killer deep cuts) over the course of his record-breaking career that crafting his setlists must have been a puzzle, but nevertheless he and the band somehow managed to bring out just about everything you’d want to hear — “Your Song,” “Candle in the Wind” and “Rocket Man” to name just a few. We’re not quite ready to say farewell to Elton, but we’re thankful that he is going out with an epically stylish affair.

Congratulations to P!nk, the Rolling Stones and Elton John for their Ticket of the Year wins, and a big thank you to each artist for making each live show uniquely exhilarating.