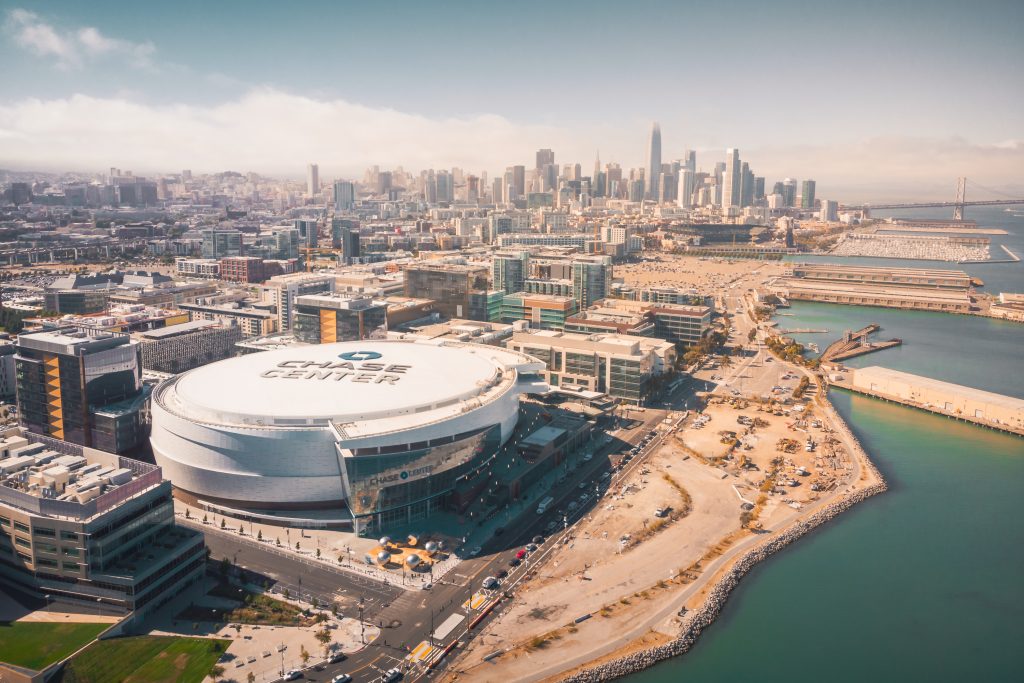 The San Francisco Bay Area is an excellent place for a sports fan. Some of the sporting world’s greatest franchises are based here, and the area also has a storied college sporting tradition with some spirited rivalries, making it a great place to take in some college ball, or whatever catches your fancy.

Heading to the @warriors game tonight? Be sure to check out the scoreboard. It's the largest LED video display centerhung installed in a sports arena. So it'll be hard to miss.

The new home of the Golden State Warriors, Chase Center replaced Oracle Arena as the epicenter of San Francisco’s basketball scene in the 2019-2020 season. Located in the Mission Bay neighborhood of the city, the arena opened on September 6, 2019 with a concert by Metallica and the San Francisco Symphony. The Warriors played their first-ever preseason game against the Lakers on October 5, 2019. The arena is composed of multiple layers and has a seating capacity of 18,064, and a multipurpose area that includes a performance configuration.

Just 1️⃣ WEEK away from @jbalvin’s #arcoiristour🌈 coming to San Jose! Get your tickets today!

The SAP Center helped revitalize downtown San Jose when it opened in 1993. Clad in stainless steel and featuring a 10-story glass pyramid entrance, the 20,000-seat arena opened with a Ringling Bros Circus show and has hosted figure-skating championships and NCAA tournaments, not to mention major touring acts like Katy Perry, Bruce Springsteen and Jay Z. It’s best known, however, as the home of the San Jose Sharks. The team, fresh off two lackluster seasons at the Cow Palace, came alive at the Shark Tank in the 1993-94 season, beating the Detroit Red Wings and making it to the semi-finals. Hockey has ruled there ever since.

A post shared by Charles Woodson Wines (@charleswoodsonwines) on Mar 5, 2018 at 2:34am PST

Surrounded by a sea of parking and easily accessible by BART, the Coliseum has done double duty as home to both football (the Oakland Raiders) and baseball (the Oakland A’s) for decades. This is the place Billy Beane worked his magic with the Athletics, and not surprisingly parts of the film Moneyball were shot here. The Coliseum is big — the variable seating can accommodate up to 56,000 fans — but you wouldn’t necessarily know it from the outside, thanks to a sunken playing surface. It has the most foul territory of any baseball field. Fun facts: Parliament-Funkadelic recorded half of a live album here, and the Rolling Stones played here in 1969.

It’s good to see these ladies back on the court for some action packed #volleyball : : #GoBears #Cal #Women #Athletes #Berkeley #California #Sports #Photography

Who says professional sports deserve all the fans? The Bay Area has an amazing collegiate sports tradition, and Haas Pavilion, in the East Bay on the UC Berkeley campus, is one of the best places to sample it. Drop in to catch the Golden Bears playing men’s and women’s basketball or (if you’re lucky) you might catch a gymnastics or volleyball game. Haas sits on the same site where the storied Harmon Gym stood for 60 years. A renovation completed in 1999 doubled the seating to over 11,000 without sacrificing Harmon’s 1930s-style intimacy: The top row of seats is still just 88 feet from the floor.

🚨 TICKET GIVEAWAY 🚨 LIKE & TAG a friend for a chance to win two tickets to this weekends @pll action on Aug. 10-11!

Avaya Stadium has had a short but seismic (excuse the pun) history. Home of the San Jose Earthquakes, one of the country’s top soccer teams, the 18,000-seat stadium opened for business in 2015. But what it lacks in history, it makes up for in ambiance and amenities: The arena has extremely steep seating to provide better views, and its suites are all on the ground level. It boasts what is reportedly the largest outdoor bar in North America, which is the perfect place to take advantage of the area’s gorgeous weather. You can also catch rugby games there.

The Sonoma Raceway is the best swerve to take if you want to experience a lesser-known side of San Francisco sports. Located in Marin County, the 2.52-mile road course winds its way through 12 turns on hilly terrain, with an elevation gain of 160 feet. It hosts motorcycle events, NASCAR races and the annual Sonoma Historic Motorsports Festival, a race just for classic cars. But our money’s on the Wednesday night drag races, where amateurs and professionals can compete, and the Sonoma Drift, where contestants don’t drive for speed but style. A great way to get off the beaten track.

Nestled in the middle of University of San Francisco’s campus is the War Memorial Gymnasium, home to the USF Dons. The gym has had a few brushes with fame: It was the site of CBS’s first-ever college basketball broadcast, and it briefly hosted the Warriors in the mid-’60s. Soak in the history while checking out USF’s men’s and women’s basketball teams, or women’s volleyball. This “gym” seats around 5,000 fans (!), and was built in 1958 as a tribute to all the USF alums who died in World War II, the Korean War and the Vietnam War. When you’re not cheering on the games, check out the miniature Hall of Fame, with sporting trophies and memorabilia spanning the decades.

Maples Pavilion, like everything on the Stanford campus, is a little different: Its covered concourse wraps around the seating area, but with a landscaped gap, so you never lose Stanford’s garden-like, indoor-outdoor feel. But when it comes to sports, the university is serious: This 7,000-seat venue, which opened in 1969, is home to the men’s and women’s basketball teams, the women’s volleyball team and a few gymnastics and wrestling events. In 2005, the university completed a $26 million renovation, with more upgrades in 2015. The pavilion is named for Roscoe Maples, a lumber magnate and 1904 class member… though rumor has it he didn’t graduate.