The lights of Broadway are always shining bright – illuminating the New York City streets, and the passionate curiosity of faithful theater fans through decades of history that continues to flourish. Behold, below are the essential rooms that have built and defined all the best of the Great White Way. 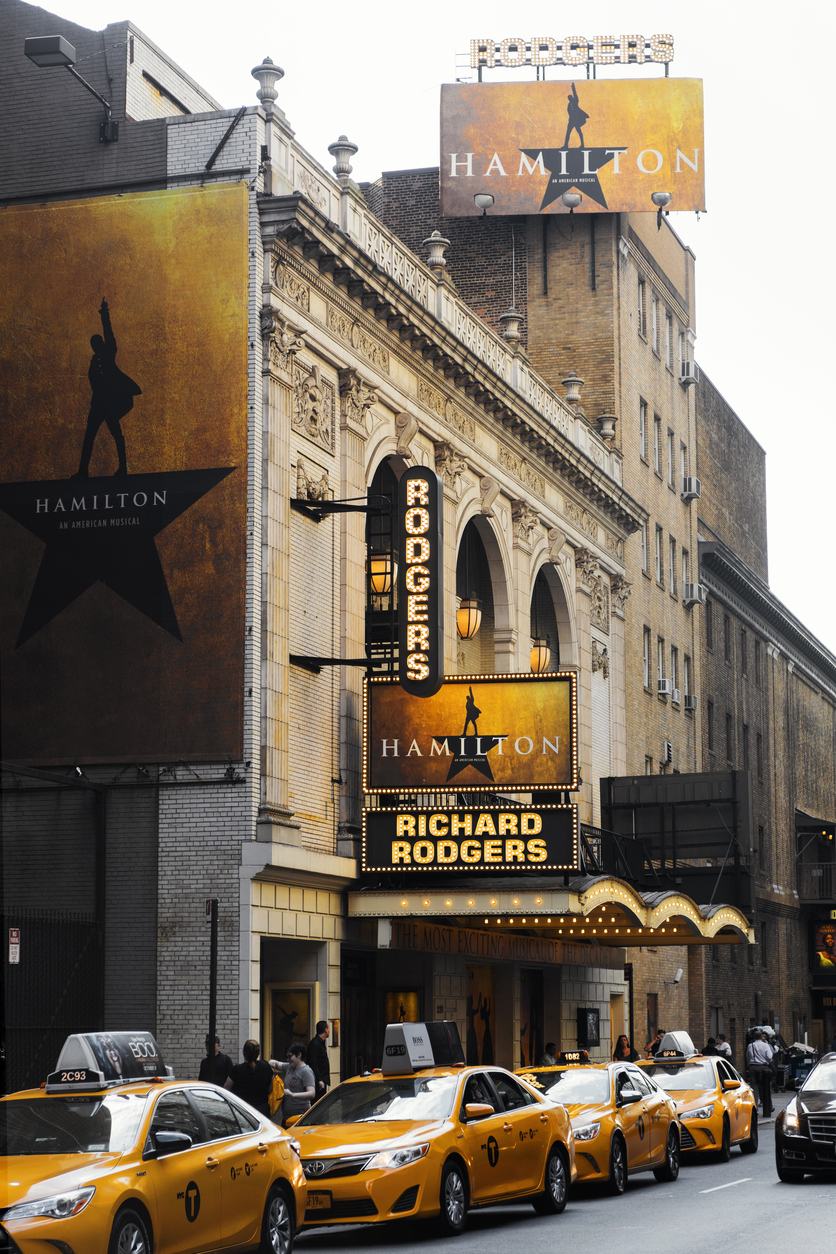 Irwin Chanin built the Richard Rodgers in 1925 and named it Chanin’s 46th Street Theatre. It was the first Broadway theater to reflect Chanin’s “democratic” seating plan, which did away with separate entrances for the pricier orchestra and cheaper balcony and mezzanine seats. Alexander Hamilton, who inspired the theater’s Tony-grabbing, record-setting current production, Hamilton: An American Musical, would no doubt approve. The Nederlander Organization bought the 1,319-seat theater in 1981 and rechristened it after composer Richard Rodgers in 1990. It has subsequently presented more Tony Award-winning Best Plays and Best Musicals than any other Broadway house.

Boasting Broadway’s largest capacity with 1,933 seats, the Gershwin has presented the megahit musical Wicked since 2003. The Capitol Theatre formerly occupied the site where the office building housing the art nouveau-style Gershwin now stands. Originally named the Uris Theatre when it opened in 1972 with the musical Via Galactica, it was renamed after composer George Gershwin and his lyricist brother, Ira, during the 1983 Tony Awards ceremony. Other notable productions at this Nederland venue include The King and I, Sweeney Todd: The Demon Barber of Fleet Street, and Starlight Express.

Such a fun show! Saw @aladdin on Broadway last night and I was grinning the entire time. I loved this movie as a kid – glad we finally got out there to see it on the stage. Everything was so bright, colorful and sparkly. And that Genie is hilarious. #aladdinbroadway #aladdin #disney #broadway #theater #nyc #musicaltheatre #musical #iloveny

Broadway’s oldest operating theater (capacity 1,702) opened in 1903 with a lavish production of Shakespeare’s A Midsummer Night’s Dream. With its beaux arts exterior and art nouveau interior, the New York landmark was home to the Ziegfeld Follies from 1913 to 1927, when the likes of Fanny Brice, Bert Williams, Will Rogers, and W. C. Fields trod its boards. In 1995, Disney Theatrical Productions signed a 49-year lease that has led to productions of The Lion King, Mary Poppins, and, currently, Aladdin, playing here since 2014. Like other Broadway theaters, the New Amsterdam is said to be haunted since around 1920, in this case by Ziegfeld chorus girl Olive Thomas. 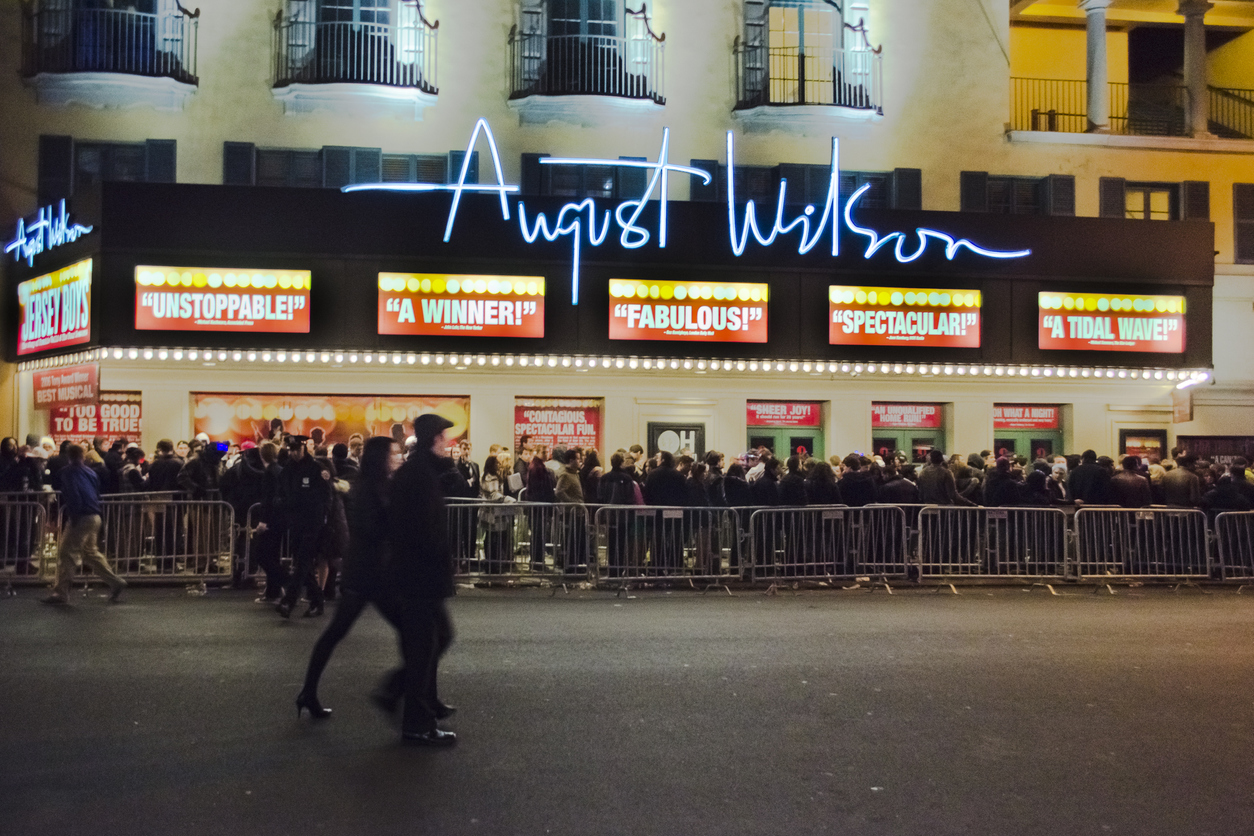 Currently the home of Mean Girls, the August Wilson began life as the Guild Theatre in 1925 with a revival of George Bernard Shaw’s Caesar and Cleopatra. It was used as a radio studio in the ’40s and renamed the ANTA Theatre following another purchase. The Jujamcyn group bought it in 1981 and renamed it the Virginia Theatre after a board member. It was renamed the August Wilson Theatre shortly after the esteemed playwright’s death in 2005. Although Wilson’s award-winning 10-play Pittsburgh Cycle has yet to be produced here, the 1,222-seat venue has debuted Tony Award-winning musicals including City of Angels and Jersey Boys. 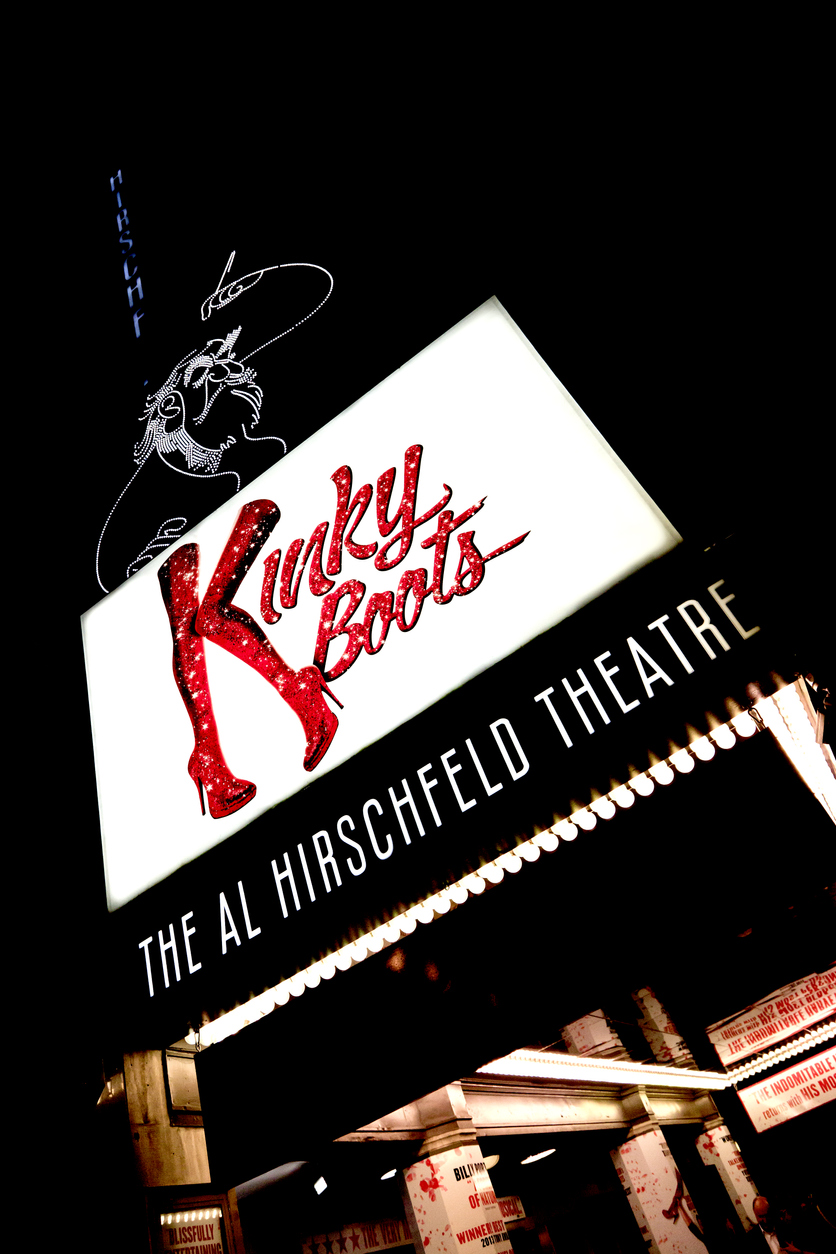 You’ll find the Theater District’s westernmost house on a relatively quiet block that lets its Byzantine and Moorish architecture shine. Known for the colorfully ornate dome hovering overhead, the Hirschfeld opened as the Martin Beck Theatre in 1924 and has a seating capacity of 1,424. In 2003, it was renamed to honor the caricaturist famous for his whimsical drawings of Broadway celebrities. The marquee contains an illuminated version of Hirschfeld’s ‘Self Portrait as an Inkwell.’ The theater’s opulence extends backstage, where dressing rooms for 200 actors reflect its emphasis on large theatrical ensembles and musicals, such as current production Kinky Boots. The musical Moulin Rouge!, based on the Baz Luhrmann movie, is scheduled to open in June 2019.

Anyone who’s seen the 2014 film Birdman will be almost intimately familiar with this large theater in which most of the film takes place. Containing 1,710 seats on three levels, the St. James opened as the Erlanger Theater in 1927 on the site of the original Sardi’s restaurant. Now home to Disney’s Frozen, the St. James legacy includes the original productions of many classic musicals, including Oklahoma!, The King and I, Hello, Dolly!, The Who’s Tommy, and The Producers.

The current home of the Tony-nominated musical Waitress was known as the Mansfield Theatre when it was constructed in 1926. During the ’40s and ’50s, the Mansfield was used as a CBS production studio for long-running panel shows, including What’s My Line? and I’ve Got a Secret, as well as comedies like The George Burns and Gracie Allen Show. In 1960, it was renamed for influential New York Times theater critic Brooks Atkinson and returned to its original use. A lovingly restored, large chandelier illuminates the Atkinson, which is part of the Nederlander group and seats 1,069.

When it first opened in 1910, the Lunt-Fontanne was known as the Globe Theatre, after Shakespeare’s London playhouse. At the time, its ceiling rolled back in order to cool things down in the summer; iced seats and hot-air vents also enhanced theatergoers’ seasonal comfort. The theater was rechristened in 1958 in honor of Alfred Lunt and Lynn Fontanne. Widely considered American theater’s greatest acting team, the couple (who refused to perform separately) inaugurated the renovated venue with a production of Friedrich Dürrenmatt’s The Visit. More recently, Summer: The Donna Summer Musical ran through most of 2018 at the Nederlander house, which seats 1,415. 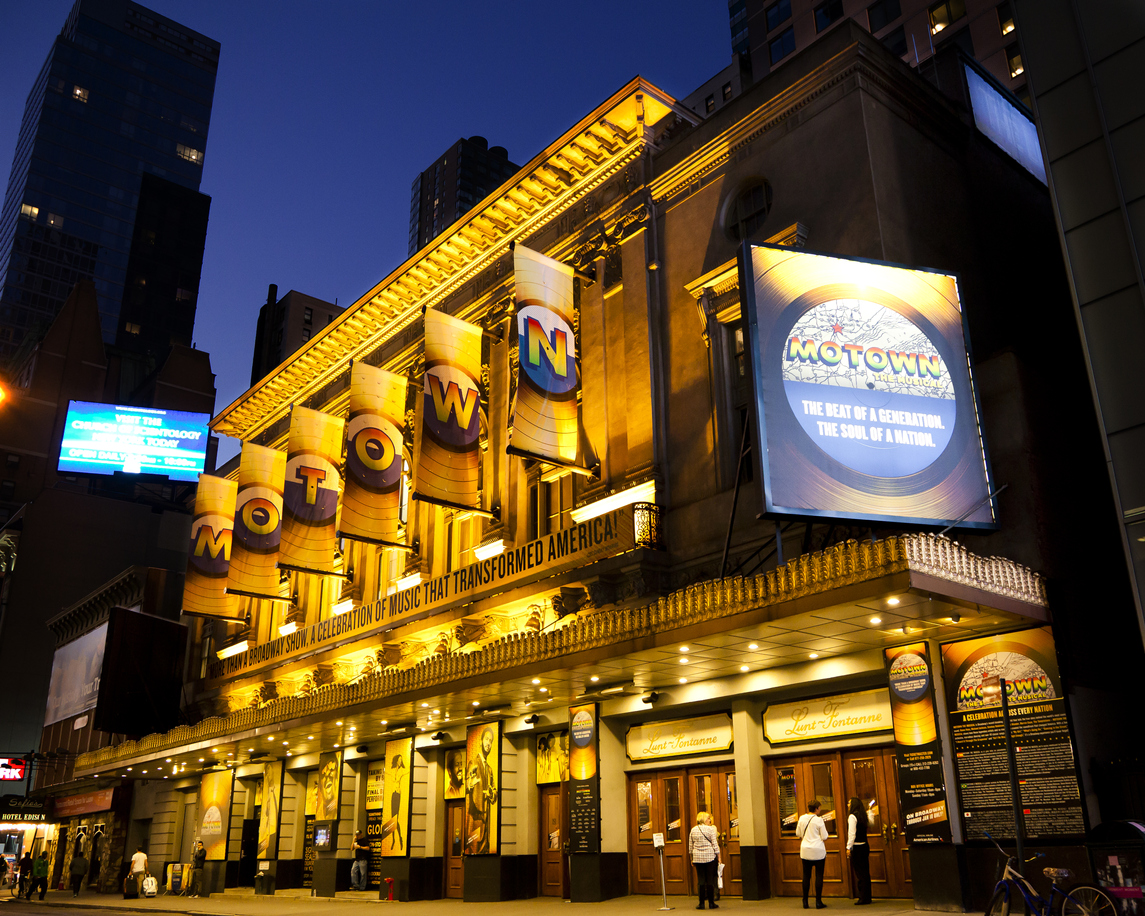 The David T. Nederlander Theatre, as it is formally known, opened as the National Theatre in 1921 after its conversion from a carpenter’s shop. The 1,232-seat space that currently houses Pretty Woman: The Musical became known as the Billy Rose Theatre in 1959 after the impresario and lyricist (“Me and My Shadow”) purchased it. The Nederlander Organization bought and renamed the theater, which also briefly accommodated the Times Square Church, in 1980. Notable productions include jukebox musical Motown, Lillian Hellman’s The Little Foxes, Noël Coward’s Private Lives, and Edward Albee’s Who’s Afraid of Virginia Woolf? In 1996, the Nederlander was transformed into a grungy portrayal of downtown for Rent. 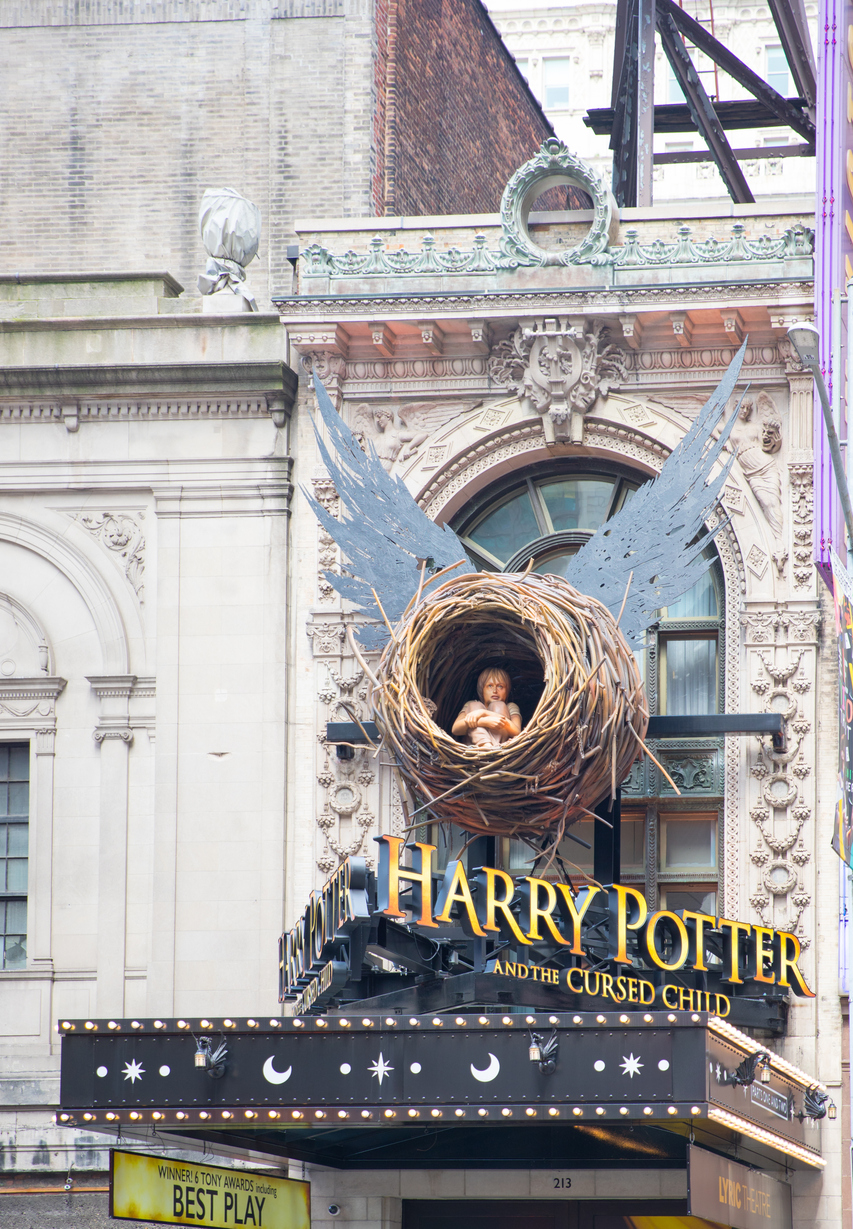 The Lyric was built on the site of the 1903 theater after which it was named. The rebuilt theater opened as the Ford Center for the Performing Arts in 1998 and would later be renamed the Foxwoods Theatre, after its casino owners, and, when the hotel chain purchased it, the Hilton Theatre. Renamed yet again in 2014, the Lyric was renovated completely for its current production, Harry Potter and the Cursed Child, and reduced in capacity to 1,622 seats.

The Lion King sleeps tonight at the Minskoff, where it has resided since 2006. The theater takes up the third floor of One Astor Plaza, which also houses MTV Studios and the PlayStation Theater. The 1,621-seat venue opened in 1973 with a revival of Irene, starring Debbie Reynolds. It has also presented Broadway revues featuring Charles Aznavour and Bette Midler; the Merce Cunningham and Maurice Béjart dance companies; and the Broadway debuts of Sunset Boulevard, Saturday Night Fever, and The Adventures of Tom Sawyer. 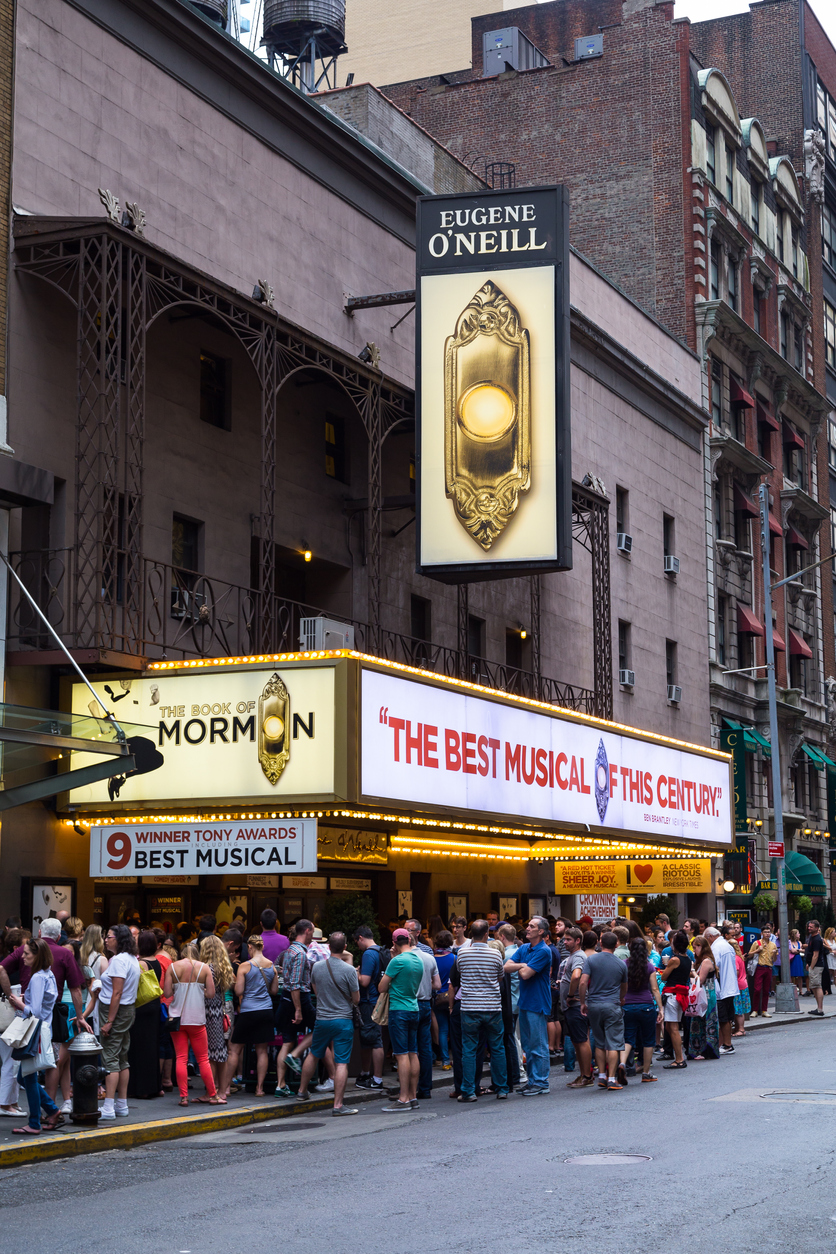 Opened at the height of Broadway’s popularity in 1925, this Herbert J. Krapp-designed neoclassic venue (capacity 1,108) was named for America’s first theatrical star, the 19th-century tragedian Edwin Forrest. It was renovated and renamed the Coronet Theatre in 1945 and then rechristened the Eugene O’Neill, in honor of the great American playwright, in 1959. Playwright Neil Simon bought the theater in 1968 and produced 10 of his plays here. Other significant O’Neill productions include Rosencrantz and Guildenstern Are Dead, Spring Awakening, and, currently, The Book of Mormon.