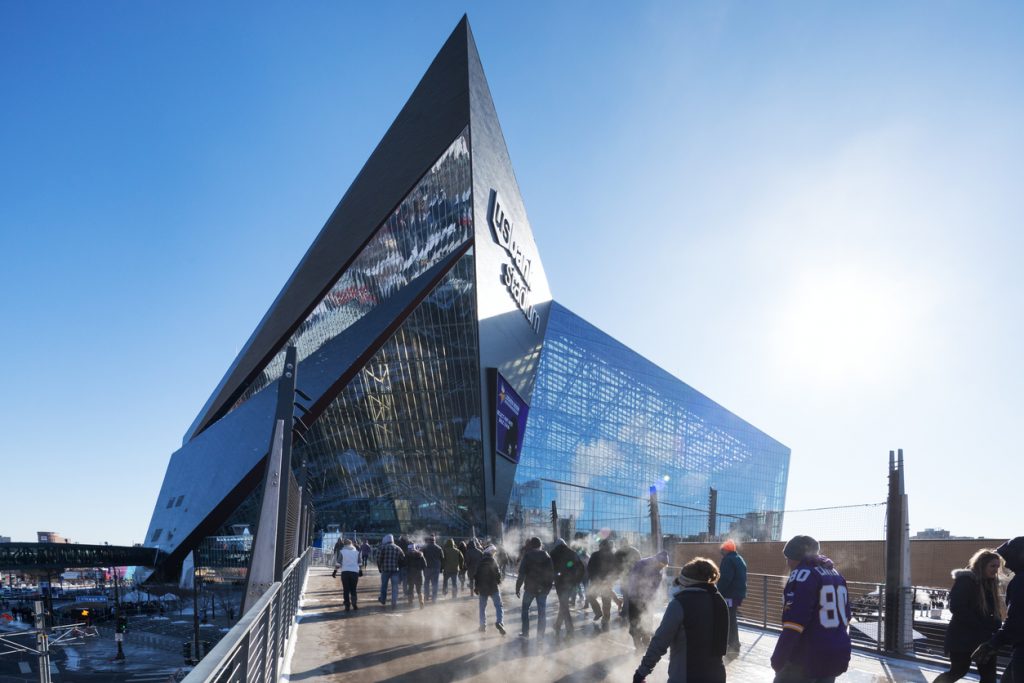 U.S. Bank Stadium is considered one of the loudest stadiums in the country, as the translucent roof and walls create an acoustically reflective environment.

Constructed in 2013 and opened in 2016, U.S. Bank Stadium is considered a major development in Minneapolis and was designed to house Superbowl LII, the Minnesota Vikings football team, and other uses. It was the first fixed-roof NFL stadium built since 2002.

During the design phase, the state of Minnesota pressed for an indoor, rather than outdoor, stadium, specifically to be able to host events such as the Final Four games and Super Bowl games. The Vikings owners, on the other hand, were partial to an outdoor stadium. In the end, a compromise was struck – the stadium was designed with a fixed-roof, but its roof was made with a translucent material to bring in as much natural light as possible.

The walls were also designed with translucent material to allow visitors and fans the chance to take in a view of downtown Minneapolis, as well as providing fans the opportunity to gain all the benefits of an outdoor stadium without ever having to cancel games due to weather.  The new stadium was soon scheduled to host Super Bowl LII on February 4, 2018, as well as the 2019 NCAA Final Four and the 2020 NCAA Division 1 Wrestling Championships.

U.S. Bank Stadium is considered one of the loudest stadiums in the country, as the translucent roof and walls create an acoustically reflective environment. While the Vikings may have gotten used to the noise, opposing teams have a harder time adapting to the sound variations and decibel levels throughout the stadium.

While U.S. Bank Stadium serves as the home turf for the Minnesota Vikings, it’s also used to hold tournaments for different athletic events. The NCAA scheduled the 2019 men’s basketball Final Four competition at U.S. Bank Stadium, while the summer X Games were held at the venue in 2017 and again in 2018.

Fans can also catch soccer events at U.S. Bank Stadium – its first match was held in 2016, with 64,101 spectators gathering to watch the Chelsea vs. Milan match. The University of Minnesota baseball team plays games at the stadium during colder months.

The stadium has also become a major concert venue for the region.

Customers can purchase accessible seating tickets online, over the phone or in person. To accommodate those with disabilities, U.S. Bank Stadium provides the option to purchase up to an additional three seats for companions, as long as those seats are in the same row, ideally directly next to the purchaser.

Accessible seating can be found in all seating levels at U.S. Bank Stadium. For questions and to obtain accommodations, contact the box office by calling 612-777-8787.

All bathrooms are accessible to those with mobility issues or other disabilities.
U.S. Bank Stadium has also ensured that those with disabilities are provided with accessible vehicle drop-off spots, parking, restrooms, concessions, ATMs and water fountains. The stadium provides assistive listening devices for those with hearing loss or hearing disabilities.

Closed captioning can be viewed directly next to the video boards inside the stadium seating area.

Restrooms can be found throughout U.S. Bank Stadium. Family restrooms are intended only for those accompanying small children as well as attendees with mobility issues or other disabilities. Family restrooms can be found in the West Event Level End Zone, on the concourse behind sections 103, 114, 124, 136, 306, 309, 316, 319, 340, 343, 346 and Thomson Reuters Press Level, in addition to all club spaces throughout the stadium.

Baby changing stations are located in all public restrooms, as well as family restrooms.

Will Call opens one hour before the event. Bring a photo ID and the credit card that was used during purchase to obtain your tickets at Will Call.

Tickets can also be purchased at ticketmaster.com.

You can also make your way to U.S. Bank Stadium by bus. Routes 3, 5, 7, 9, 14, 19 and 22 all stop at or near the stadium. Check the Minneapolis/St. Paul Metro Transit website for more information and to plan your trip.

The Northstar Line Park & Ride is also an option. The surrounding areas hold 3,000 free Park & Ride spaces at Northstar stations for select events. From there, you can board the Northstar and be dropped off directly at U.S. Bank Stadium.