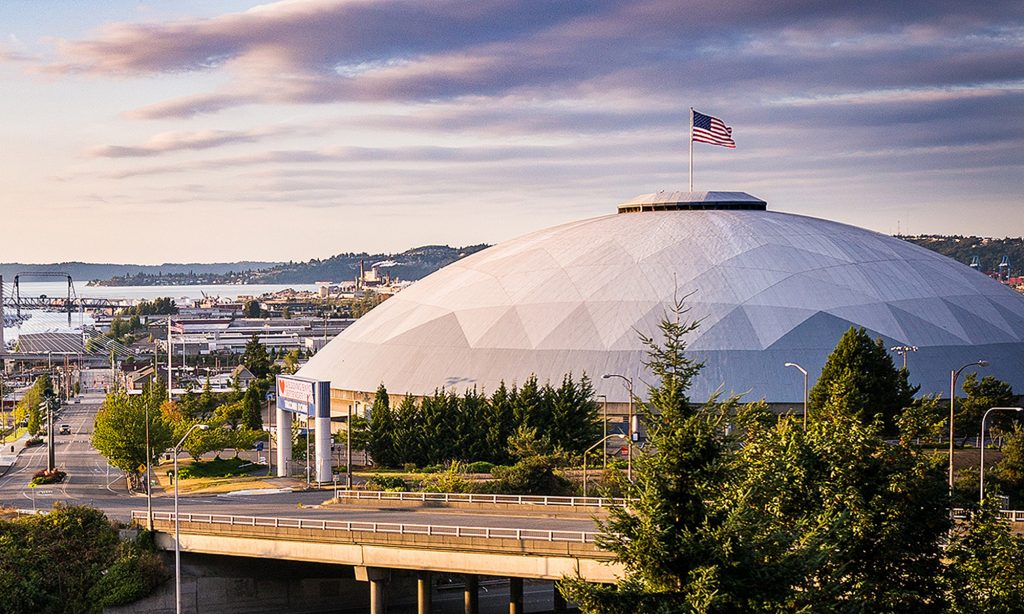 When it comes to indoor venues in Washington, the Tacoma Dome takes top honors — it’s the biggest in the entire state. But not only can it hold up to 23,000 fans in a concert setting and more than 20,000 for basketball and soccer, its adaptability allows for all kinds of reconfiguring, so it can be set up to suit events for audiences as small as 1,000. Since opening in 1983, the wooden-domed arena has brought sports, music and more to the region — local basketball events like the Hardwood Classic and big-name concerts by the likes of Blake Shelton. The Dome is a mighty, monumental entertainment hub for the Evergreen State.

Happy first day of summer! We're ready to enjoy the sunshine and live like the mountain is out! ☀️☀️☀️☀️ @south_sound_proud

Right off I-5 and across from McKinley Park, a Washington institution began on April 21, 1983, when the Tacoma Dome officially opened its doors. The first event ever held at the stadium occurred on August 11, when David Bowie brought his Serious Moonlight world tour to town. Right off the bat, the Tacoma Dome became almost as renowned for its design as its entertainment, thanks to a strikingly colorful sculpture inside the arena by famed artist Stephen Antonakos. The proudly postmodern-looking piece incorporated more than 1,100 feet of neon tubes.

After three and a half decades of presenting top-tier music and sports events, the arena underwent major renovations in 2018, to the tune of $30 million. When it opened its doors again later that year, it was even better equipped to make its thousands upon thousands of patrons feel at home.

"To all of you fantastic people out there, I love you so much! Thank you!" – @eltonjohn Tacoma absolutely loves you Sir Elton John! Thank you for two incredible, sold-out nights of fantastic music 🌟🌟 #EltonFarewellTour 📸: @endimages 📹: @thetacomadome

After kicking off its concert history with the epochal Bowie tour, the Dome has continued to spotlight the biggest artists around. Sometimes this means bringing classic rock legends like Bob Seger and Rush to the stage, at other times pop icons like Elton John and Billy Joel. In recent years, everybody from Post Malone and Drake to HAIM and The Black Keys have given their all at the Tacoma Dome. Fans have turned out in droves for non-musical performances too, like the unpredictable antics of the Impractical Jokers. And for holiday fare, shows like the Trans-Siberian Orchestra‘s seasonal rock extravaganza have made the chilly end of the year feel a lot warmer.

Over the years in sports, the Dome has been home to the Seattle SuperSonics, the WHL’s Tacoma Rockets, the WCHL’s Tacoma Sabercats and the MISL’s Tacoma Stars. Along the way, the arena has hosted rodeos for the Built Ford Tough Series, World Championship Wrestling extravaganzas like the Spring Stampede, and NCAA Championships for football and women’s basketball.

Are you early for Eric Church? Come hang out at the pre-show party in the Exhibition Hall at the T-Dome!

Nobody goes hungry (or thirsty) at the Tacoma Dome. Throughout the venue are spots where visitors can buy snacks, suds and more substantial fare. Find Mexican flavors at Taco Ma’s (nachos, bowls and tacos), other savory items at CHX Chicken Kitchen and pizza offerings at Tacoma Dough. Other favorites include Fire, where you might stop by just to find out what kind of wonders they can work with a grill.

Keeping a connection with local culture is important at the Tacoma Dome, and the presence of Stan’s Place, a haven for lovers of comfort food, bears this out. It’s named for late baseball hero Stan Naccarato, a Triple-A baseball manager and minor league pitcher known as “Mr. Tacoma,” who had a lot to do with making the Dome a reality. Meanwhile, fish-and-chips fans head to Dock St., and barbecue fans find themselves at home at Smoke. Bars like Ninkasi, The Garage and the BSB Backstage offer mixology menus, while wine, craft beer and soft drinks abound throughout the floor and concourse levels of the arena.