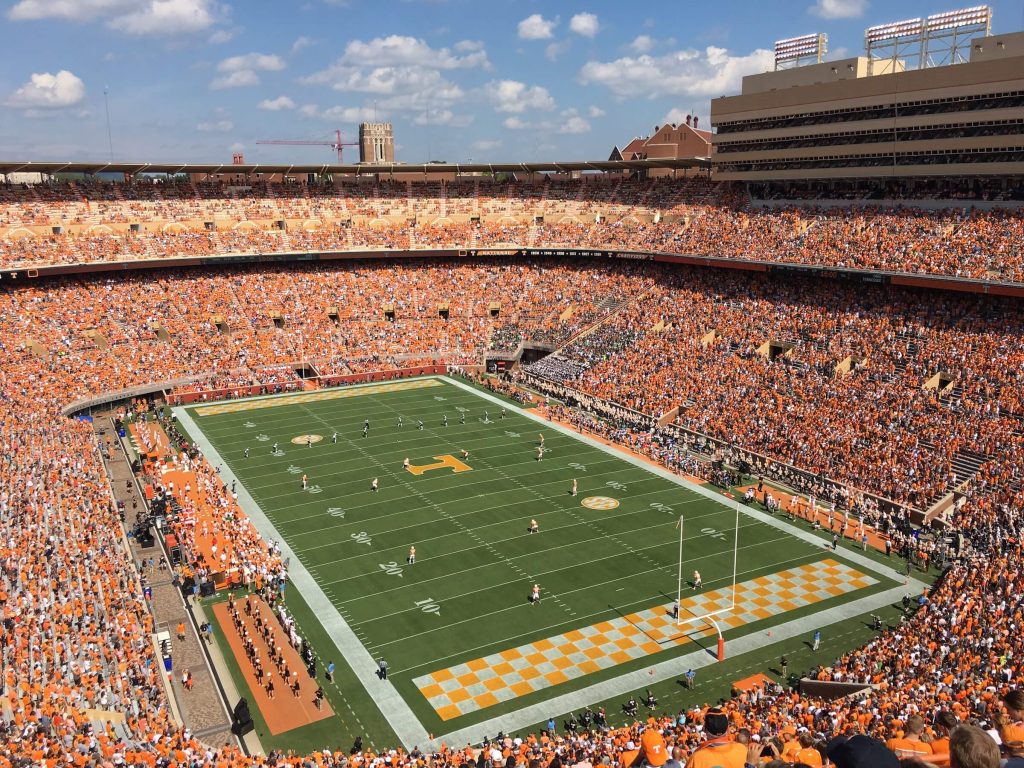 The venue got its start in 1919 when Knoxville’s City National Bank President and UT trustee Colonel W.S. Shields financed the construction. In September of 1921, the Vols played their first game at what was previously known as Shield-Watkins Field, beating Emory & Henry College 27-0.

Although Neyland Stadium is best known for its enclosed stadium build and high seating capacity, the Tennessee athletics department and Board of Trustees announced a plan to renovate Neyland Stadium that includes more than $288 million to modernize the fan experience and update the amenities. In 2021, Neyland Stadium added a state-of-the-art light show experience. In 2022, renovations included a new jumbotron in the north end zone, an added north end zone party deck and an overhaul of sections in the lower bowl club seats on the west side.

Parking and Admission at Neyland Stadium

Game day parking for Neyland Stadium opens at 7 a.m. across campus. For all lots surrounding the stadium, spots are reserved for specific passholders like media and season ticket holders. Limited on-campus parking at the UT Culinary Institute is available for $40 and includes cross-campus shuttle services. Additional paid and free parking is available on non-university lots and off campus.

All fans, regardless of age, must have a ticket to be admitted into Neyland Stadium. In 2022, the University of Tennessee opted for paperless ticket entry. Tickets can be scanned electronically via the Ticketmaster app or through the online Ticketmaster mobile portal. Additionally, Neyland Stadium has a clear-bag policy, where handbags larger than 4.5” x 6.5” will be permitted only if they’re clear (not to exceed 12″x 6″x 12″). Smoking is not permitted inside Neyland Stadium, including vaporizers and electronic cigarettes.

As the sixth-largest stadium in the United States, Neyland Stadium’s official capacity is 102,455. However, the largest crowd to ever watch the Vols play in Neyland Stadium was 109,061 in 2004 when Tennessee bested their rival, the Florida Gators, 30-28. The stadium has four tiers of seating: the lower bowl, club seating, press and luxury boxes, and the upper bowl. Bleacher seats are the most available option, but there are select chair-back seats in addition to luxury seating options in suites and boxes. With the completion of the newly renovated party deck, standing room options are now available as well.

In 2019, after a rule change that permitted alcohol sales at collegiate sporting events, Neyland Stadium approved the sale of alcohol. Beer is sold throughout the stadium at concession stands and kiosks, while wine is sold specifically in the Tennessee Terrace and in the East and West Clubs. There is a maximum of two beverages sold per transaction and sales will conclude at the end of the third quarter. Options include domestic, imports, local crafts, and seltzers.

UM Wolverines vs. MSU Spartans: a Look at This Michigan Football Rivalry

The Michigan Wolverines and the Michigan State Spartans have an in-state interdivisional rivalry within the B1G conference. The winner of the B1G Eastern Div...

Longhorns vs. Horned Frogs: a Look at This Texas Football Rivalry

The Texas Longhorns and TCU Horned Frogs have a geographic, conference rivalry in the Big XII. Because of the close proximity between campuses, 186 miles, th...