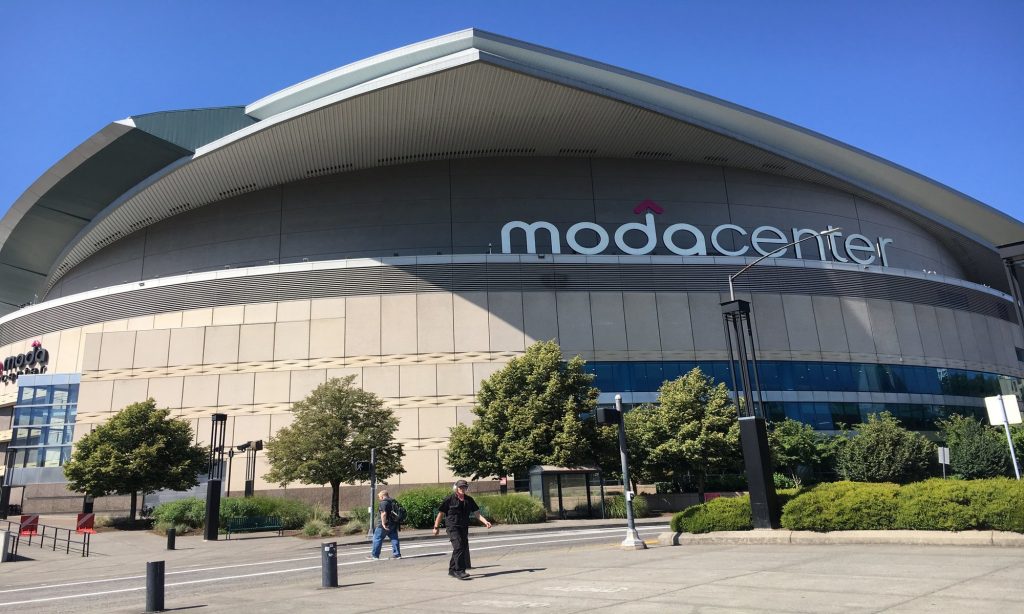 Virtually stone-skipping distance from the Willamette River, the 20,000-seat Moda Center is the crown jewel of Portland’s Rose Quarter, which is also home to the smaller, historically protected Veterans Memorial Coliseum. While the Western Hockey League’s Portland Winterhawks split their time between the two arenas, the NBA‘s Portland Trail Blazers have called the Moda home since it opened in 1995. Though the Moda is the city’s leading indoor sports arena, its calendar is typically diverse, spanning everything from kid-friendly ice shows to tattoo conventions, bull riding to wrestling and massive comedy stars to some of the biggest names in music.

A picture perfect day on the Willamette.

As the NBA’s popularity grew, the Moda was proposed as an upgrade to the 12,888-capacity Memorial Coliseum. A few years and $262 million later, the arena opened October 12, 1995, as the Rose Garden in tribute to Portland’s nickname, Rose City. Like the Trail Blazers by that time, the venue was owned by Microsoft cofounder Paul Allen (his estate owns both today). It took 1.3 million cubic feet of concrete and 9,700 tons of steel to build the place, but one of the more interesting construction features hangs from the ceiling: the so-called “acoustical cloud,” 160 panels that can be rotated to absorb or reflect the sound below. They were installed in an attempt to recreate the deafening game-day roar that the original coliseum was known for.

Another innovation that was baked into the Rose Garden from the start is the Theater of the Clouds. By moving the stage into center court, lowering massive curtains, and repositioning the sound panels, organizers can transform a section of the arena’s interior into an intimate theater environment. That flexibility and dedication to creating the best audience experience possible carried over when naming rights were granted to insurance provider Moda Health in 2013.

got taken to church by @hozier tonight 🙏

In addition to the Trail Blazers and Winterhawks, the Moda Center has previously been home to a handful of franchises: the WNBA’s Portland Fire, the National Lacrosse League’s Portland Lumberjax, the Arena Football League’s Portland Forest Dragons and the World Indoor Soccer League’s Portland Pythons. The Moda also hosted the 2005 U.S. Figure Skating Championships, won by future Olympian Johnny Weir and former Olympian Michelle Kwan, and a few NCAA tournaments. The Portland State Vikings no longer play the court at Moda, but the university has been holding spring commencement at the venue for decades (Bill Clinton was the speaker in 1998).

The first concert to christen the arena happened on October 25, 1995, and was a double bill featuring David Bowie and Nine Inch Nails. The Moda has since played host to a wider array of artists than most arenas thanks to its Theater of the Clouds configuration, which allows artists to perform for far more intimate crowds of 3,000 to 6,500. That space has seen performances from Bon Iver, Nick Cave, the Deftones and others, while the full arena is the go-to for superstars like Coldplay, Justin Bieber, Céline Dion, Rage Against the Machine, Hall & Oates and countless others stretching across generations. In 2000, Pink Floyd’s Roger Waters filmed much of what would become his live DVD and album In the Flesh — Live at what was then the Rose Garden.

The Theater of the Clouds also hosts speakers like Malala Yousafzai as well as up-and-coming comedians, while the arena features Kevin Hart-level comics and all-ages events like Paw Patrol Live!

Vegan slice from @sizzlepie at last night's @trailblazers game 😋 (via @sweetsimplevegan). Tag us in your arena food pics and we'll repost!

The Moda Center has a famously top-notch concessions lineup that prioritizes high-quality grub from homegrown institutions. The arena-exclusive frank — the bacon-and-cheddar-stuffed Jumbo Blaze Dog — is a team-up with the city’s nearly century-old Zenner’s Sausage Company, and there are plenty of beverages to pair it with — more than forty-five local brews on tap, for starters. Other faves include inventive pizza slinger Sizzle Pie, the dastardly decadent Killer Burger, beloved poke purveyor Kama’aina, and barbecue whiz Daddy D’s. And those with a sweet tooth won’t have to settle for generic soft serve or bulk-bought ice cream; the Moda’s sweet stops are stocked with Portland’s own Salt & Straw, famous for flavors that incorporate uncommon ingredients like bone marrow, olive oil and bleu cheese. Looking for a slightly lighter bite? Moda bakes their own soft pretzels too.