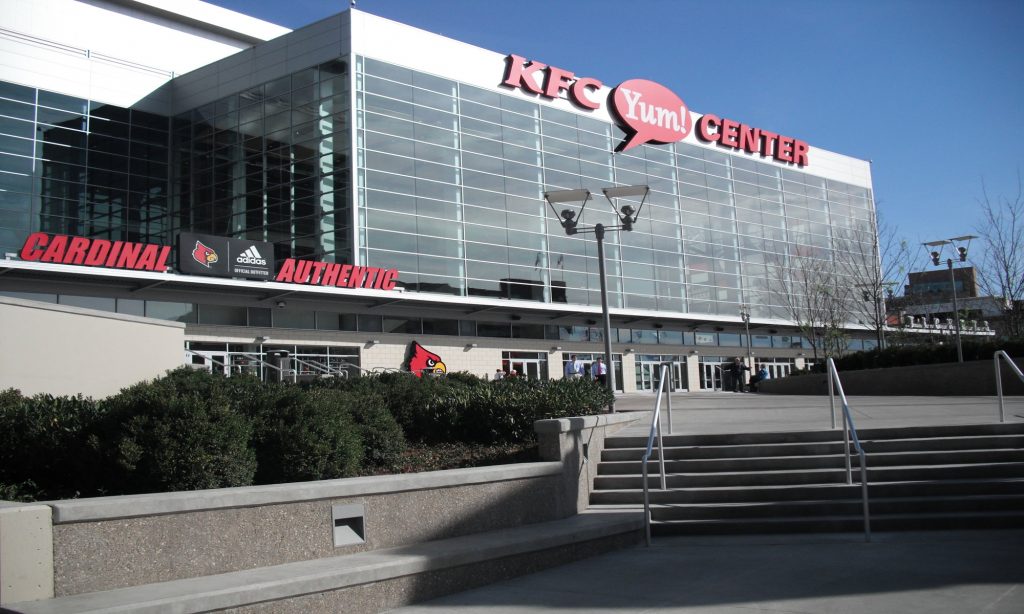 Louisville is a city loaded with parks and restaurants, but when it comes to sports and top-tier concerts, the KFC Yum! Center is the go-to venue. Sitting alongside the Ohio River waterfront, it’s built on seven acres and holds up to 22,090 fans for basketball. In fact, it has the biggest seating capacity of any basketball arena in the US.

But while the arena’s bread and butter is basketball, it hosts other sports and also has a double life as one of the region’s premier concert venues. And between its extensive food and drink offerings, lounges, luxury suites and premium boxes, the KFC Yum! Center does it all in style.

The arena was built with the primary purpose of providing a new home to the Louisville Cardinals, who had previously made their headquarters in Louisville’s smaller Freedom Hall since the 1950s. By the time the KFC Yum! Center finally flung open its doors to the public on October 10, 2010, after four years of construction at a total cost of $238 million, it boasted a 760-car parking garage, four party suites, two club lounges, 72 luxury suites, and a Cardinal Authentic retail store for fans to purchase official Cardinals gear and memorabilia. In 2017, the Center appeared in Pollstar magazine’s tally of the top arenas in the country for ticket sales, an unmistakable indicator that fans have responded to the venue in a big way.

Congratulations to @simonebiles for wining best all around at the 2019 GK U.S. Classic presented by @usagym! Also thank you to everyone who came out to cheer on these amazing athletes this weekend!

College basketball lovers flock to the KFC Yum! Center to catch games by both the men’s and women’s teams of the Louisville Cardinals, the pride of the University of Louisville, for whom the arena was initially envisioned. Starting in 2011, it became the spot for the women’s volleyball team, too.

In addition to team sports, the arena has hosted everything from monster truck rallies to WWE events and the magical experience that is Cirque du Soleil, and the end stage layout has a seating capacity of 17,500. Famous artists from just about every corner of the musical map have made their way to the venue’s stage over the years: Heavy metal monoliths like Metallica and Slayer. Folk-rock giants The Lumineers. Country royalty like Carrie Underwood and Brantley Gilbert. Hip-hop heroes like Trippie Redd. And pop legends like Phil Collins, Cher and Celine Dion. There aren’t many stars the Center hasn’t seen.

Celebrate National Popcorn Day with us today at the Harlem Globetrotters!

The first thing that should be apparent from the name alone is that the KFC Yum! Center has a serious advantage straight out of the gate when it comes to food. After all, the Yum! universe includes not only KFC but also Pizza Hut and Taco Bell. So, as you might imagine, there’s no shortage of fried chicken, pizza or Mexican food at this arena. Even if that was the full extent of the Center’s concessions, it would still be mighty appealing, but in fact plenty more culinary concoctions are to be found throughout the venue.

Metro Grills and Gateway Grills serve up burgers, sandwiches, hot dogs and nachos. Then there’s the Washington Street Deli, which offers you the option to build your own sub. Main Street Franks, Skinny Skins and Papa John’s are all a part of the action, too. On the snacking side, you’ll find irresistible offerings like nuts, ice cream, candy, popcorn, jumbo pretzels and more.

The arena’s got lots of choices on the beverage end of things, whether your preferences run toward soft drinks or something with a bit more punch. A giant sports bar on the main level includes a view of the Ohio River. At the other concessions, you’ll be able to uncover Kentucky Ale, fountain soda, vitamin water or whatever else slakes your thirst.