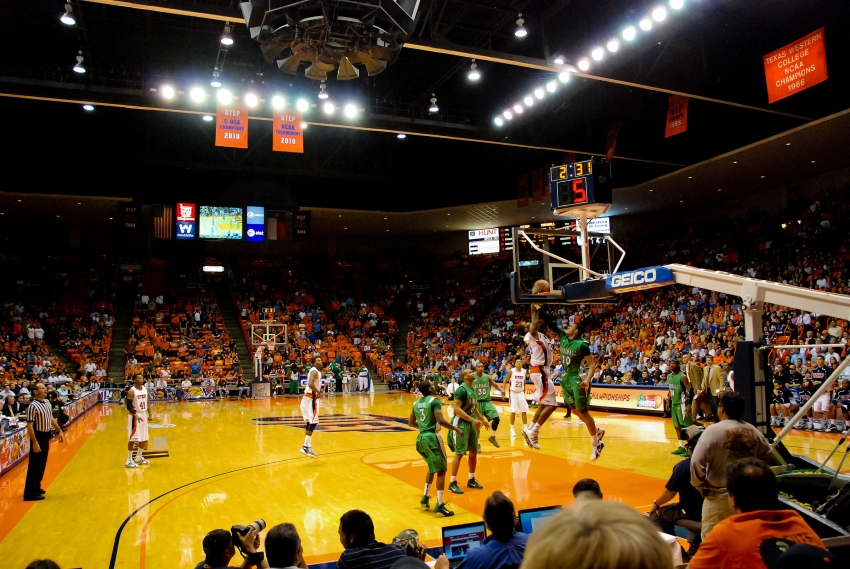 Seated on the University of Texas at El Paso campus in the heart of the city, The Don Haskins Center is a bustling hub of activity. In addition to being the home of the UTEP Miners men and women’s basketball teams, the arena is a key stopover for showstoppers like the WWE, Cirque du Soleil and the Harlem Globetrotters. It’s also the place to see some massive tours — everyone from Britney Spears to Metallica to Luis Miguel. Located directly off the continent-crossing I-10, “The Don,” as it’s lovingly been dubbed, is convenient for locals and visitors alike.

The Don sits on the UTEP campus, which is notable not only for being nestled against the Franklin Mountains but also for its unusual architecture. The college’s buildings were inspired by Bhutanese dzongs — monastic fortresses found otherwise exclusively in the Himalayas. The land that the arena sits upon used to be the home of the college stables.

Did you know? In 1945, it was ordinary to see horses escorting students to class. A pueblo-style riding stable was opened just north of Kidd Field and was open to the public and students. Students were able to ride one of the 30 horses and use western or English saddles for an hour or pay a $10 fee for a 12-hour ticket. The stables were torn down in 1958 to build the Military Science Building. #UTEPAlumni #MinerTrivia #UTEP

The Don Haskins Center is famous for not having a bad seat in the house, which is no small feat considering that, in concert mode, the arena can accommodate up to 12,567 fans. When it opened in 1977, The Don bested not only the college’s Memorial Gym (5,200 seats) but also Las Cruces’ Pan American Center, which is less than an hour away and seats 12,515.

The arena’s namesake is a true American hero. Don Haskins wasn’t just UTEP’s most beloved and longest-running men’s basketball coach (1961 to 1999). He changed college ball in 1966, when he broke the NCAA color barrier by starting five black players in the final game against the Kentucky Wildcats. It was the Miners’ only championship banner, but the win paved the way for the sport’s desegregation.

Legendary bandleader Lawrence Welk (and his orchestra) christened the arena on March 4, 1977. The gig marked The Don’s grand opening, and was booked by the Woman’s Club of El Paso and doubled as a fundraiser for the organization, which was founded in 1894.

In more recent times, Shakira holds the record for most shows performed by a female artist at The Don. Her 2002 Tour of the Mongoose booked an initial two nights, then came back for a third in 2003. That ensured return visits during 2006’s Oral Fixation and 2010’s The Sun Comes Out tours. And in 2016, The Cure were celebrating four decades as a band when they left a strong impression on The Don. Whether Robert Smith harbors a secret love for El Paso or was just in a really good mood when the band dropped in on May 17, local fans were blessed with something spectacular: a three-plus-hour set that included no fewer than five encores and the first performance of “The Perfect Girl” since 1990.

Considering The Don’s location in the heart of El Paso, parking options abound: There’s the Glory Road garage across the street and also plenty of small lots and street spots nearby. Some are free and some charge — just keep in mind that daytime weekday options may be limited if class is in session. Public transit is another excellent option, though. The Don sits right across from Sun Metro’s Glory Road Transfer Center, where several handy bus routes converge. The rapid Brio bus also stops here, making it easy to navigate the city.

The food is frills-free and intensely satisfying. Concessions stands encircle the octagonal arena, offering classics like hot dogs and nachos, and local vendors sometimes also supply tacos and burritos. Kettle corn is a frequent snacking fave. If you can’t find something to whet your appetite on the grounds of The Don, outside options abound mere blocks away. Consider Rib Hut, with its Texas-sized portions of slow-smoked meats, or The Pizza Joint, which offers twisted garlic “spliffs.” Beer options in the arena stick to the basics, so if your drinking tastes are adventurous, consider arriving early or staying late to hit beloved spots like The Hoppy Monk with its 60 taps, Ode Brewing for something truly local or Palomino Tavern, which also churns out delicious barbacoa bites on top of handmade tortillas.