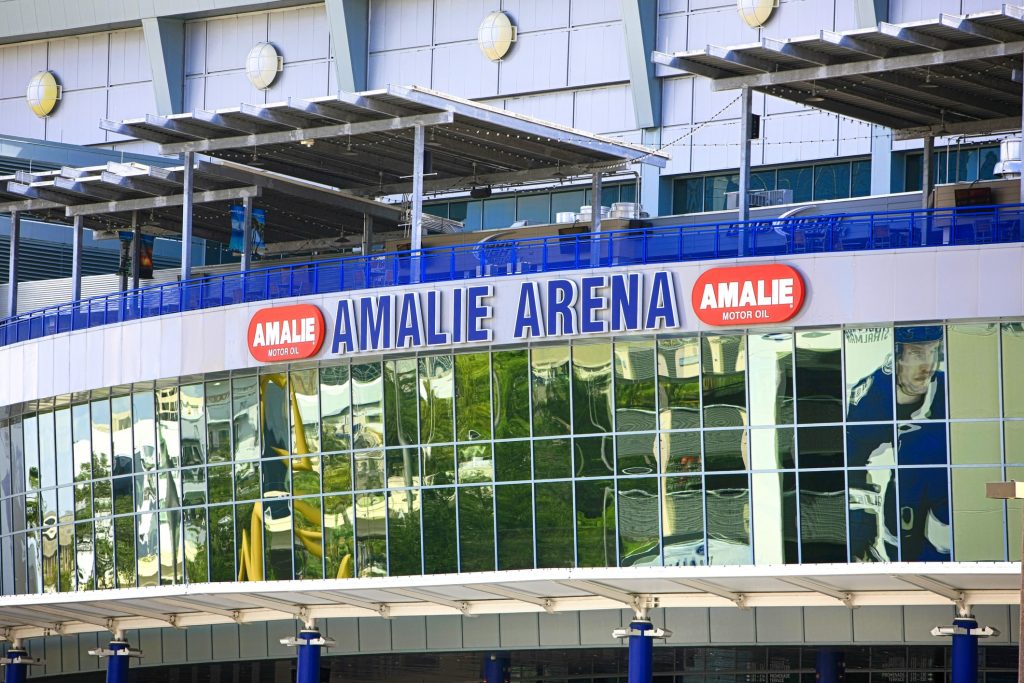 Amalie Arena is the world-class arena at the heart of Tampa, Florida’s sports scene. Opened in 1996, Amalie Arena is best known as the home of the Tampa Bay Lightning, but it is also a first-rate concert and entertainment venue. The arena seats 19,092 for hockey, 20,500 for basketball and 21,500 for concerts. Located at 401 Channelside Drive, Amalie Arena is easily accessible via TECO streetcar, as well as the Lee Roy Selmon Expressway and Interstates 4 and 275.

and we back ⚡️

When the Tampa Bay Lightning joined the National Hockey League in 1992, a permanent home for them was imperative, because their first home, Expo Hall, was too small, and St. Petersburg’s Florida Suncoast Dome (now Tropicana Field) was originally built to attract a Major League Baseball franchise. From 1993 to 1996 the Lightning and the Arena Football League’s Tampa Bay Storm drew huge crowds in what was then called the ThunderDome,” before a $139 million arena was constructed specifically for the Lightning in Tampa’s Channelside district, and the stadium was renovated to accommodate the expansion Tampa Bay (Devil) Rays.

The arena has had several name changes over the last two decades: It was the Ice Palace, then the St. Pete Times Forum, then the Tampa Bay Times Forum (after the newspaper rebranded in 2012), and finally it became Amalie Arena when Amalie Oil purchased the naming rights in 2014. Throughout these rebrandings, however, Amalie Arena has continued to be a great place for a night out. Fans looking for a bite to eat can choose from a wide array of vendors, including such local offerings as Mise En Place, Mr. Empanada and Outback Steakhouse. The Tampa Bay Sports Store offers a wide array of memorabilia and merchandise for the Lightning and all of Tampa Bay’s sports teams.

Two of Amalie Arena’s most unique features were introduced as part of renovations made between 2011 and 2013, coinciding with the Lightning’s purchase by Jeffrey Vinik and the lead-up to the 2012 Republican National Convention. Two Tesla coils produce actual lightning inside the arena during Lightning games, and the building’s Walker digital pipe organ is the largest in the NHL. In 2018, Amalie Arena installed Eaton’s Ephesus Lumadapt LED Lighting System, which combines versatility, energy efficiency, and adaptability into a first-of-its-kind system for an NHL arena.

In honor of her recent #Tampa appearance, TBT to @taylorswift here in 2013 🔺

Amalie Arena has hosted the Stanley Cup Finals twice, in 2004 and in 2017, with the decisive Game 7 against the Calgary Flames in 2004 resulting in the Tampa Bay Lightning’s first Stanley Cup title. The NHL All-Star Game has also graced the Amalie Arena twice, in 1999 and 2018. From 1997 to 2017, Amalie was the proud home to the Tampa Bay Storm of the Arena Football League. As one of the premier franchises in the league, the Storm appeared in the AFL playoffs 14 times during its tenure in the arena, hosting the ArenaBowl twice and winning the championship on home turf in 2003.

Amalie Arena has twice been host to the Women’s Final Four. In 2008, Pat Summitt won her eighth and final NCAA Division I Women’s Basketball Championship with the Tennessee Lady Volunteers, and in 2019, Kim Mulkey and the Baylor Bears defeated the Notre Dame Fighting Irish for their third Women’s Final Four title. The arena also has the unique distinction of hosting two NCAA Frozen Four tournaments 650 miles away from the nearest NCAA men’s hockey program.

The arena also shared the national spotlight in 2012 when it hosted the Republican National Convention, which pumped over $200 million directly into the local economy. In the summer of 2016, the arts collaborative Snarkitecture brought a little bit of summer indoors with the art installation The Beach Tampa, wherein 1.2 million recyclable tiny white balls were poured onto the arena floor, finally giving the city of Tampa its own (temporary) beachfront.

Amalie Arena has also hosted some of the greatest acts in entertainment. In years past, music fans have seen such legendary acts as Bruce Springsteen and the E Street Band, Paul McCartney, Kanye West, Lady Gaga, Tom Petty, Billy Joel, Taylor Swift and countless others.