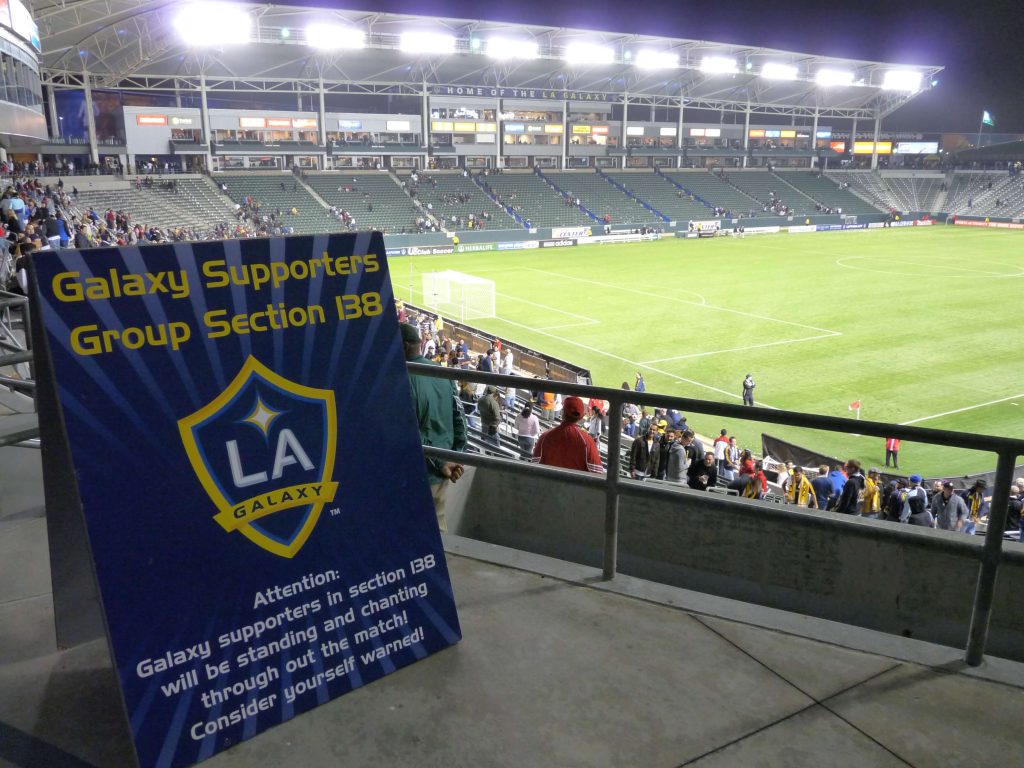 What are the LA Galaxy Supporter Clubs called?

The LA Galaxy has a number of supporter groups, including Angel City Brigade, LA Riot Squad, Galaxians, and Galaxy Outlawz.

Who are Angel City Brigade?

The Angel City Brigade was founded in 2007 as a way to generate fan support for the LA Galaxy. They are a 501c(7) non-profit organization, and 100% of the proceeds the group receives are reinvested into the group to fund merchandise, away game tickets, and more. According to their Facebook page, Angel City Brigade is “made up of fans from all walks of life” and “prides itself on being welcoming and open to everyone.”

Where do the Angel City Brigade sit?

The Angel City Brigade sit in Victoria Block Section 121, a safe standing section on the North end of Dignity Health Sports Park. The group also frequently meets before games for pre-game parties (in Lot 13) and rallies. Check their Facebook page for the most up-to-date meeting information.

How do the Angel City Brigade show support?

The Angel City Brigade’s flag colors are light blue, yellow and white. According to the group’s Facebook page, “we stand, chant and cheer for the entire 90 minutes of every LA Galaxy game, rain or shine, win or lose.”

How do I join the Angel City Brigade?

Who are the LA Riot Squad?

The LA Riot Squad’s origins date back to 2001. After a loss in the 2001 MLS Cup, then-goalkeeper Kevin “El Gato” Hartman asked fans to create a supporter group of at least 100 members. In return, the group would be rewarded with a keg of beer. It would be up to these fans to stand, chant and cheer for the LA Galaxy at every home match. The LA Riot Squad’s name is a tongue-in-cheek reference to the Los Angeles Riots of 1992. According to their website, “We are here to hang with friends and have a few beers. We are here to support the club [and] propel the LA Galaxy to victory.”

Where do LA Riot Squad sit?

The LA Riot Squad’s tailgates begin four hours before kickoff at every home match. Check the Squad’s social-media accounts for the most up-to-date tailgating meetups. All LA Galaxy fans are welcome. During games, the Squad sits in Sections 137 and 138 (Victoria Block) of Dignity Health Sports Park. The Squad also organizes viewing parties for away games across the city; check their Facebook page for updated information.

The LA Riot Squad has “starter” chants on their website. Historically, their favorite chant is “Riot Squad We Are Here.”

How do I join LA Riot Squad?

The Galaxians are a multicultural group of English and Spanish-speaking LA Galaxy fans. Founded in 1996, they are the first-ever supporter group of the LA Galaxy. The group’s motto is “Loyalty — Pride — Tradition.” The Galaxians support their team at every home game and travel to a number of away games.

Where do the Galaxians sit?

The Galaxians typically tailgate around 4 p.m., a few hours prior to kickoff. On game days, Galaxians gather in Section 123 in Victoria Block of Dignity Health Sports Park. Check the group’s social-media pages for the most up-to-date information.

How do the Galaxians show pride?

“We wear yellow and keep the traditions alive,” Galaxians vice president and capo Adrian Payes told LAGalaxy.com in 2016. “There are so many stories from the Rose Bowl and StubHub Center that we’ve been a part of and keep our traditions from the early days alive.”

The Galaxians also like to differentiate their group as being more family-friendly. “Our group has a lot more of a family atmosphere,” Payes added. “You’ve got all spectrums in our group including those who choose to sit and watch the game and the rest who get involved with the flag waving and chanting. In fact, several have joined us from other supporters groups because of our family environment. We offer something for everybody.”

How do I join the Galaxians?

Who are Galaxy Outlawz?

Galaxy Outlawz is the newest LA Galaxy group, founded in 2019.

Where do Galaxy Outlawz sit?

How do Galaxy Outlawz show pride?

How do I join Galaxy Outlawz?