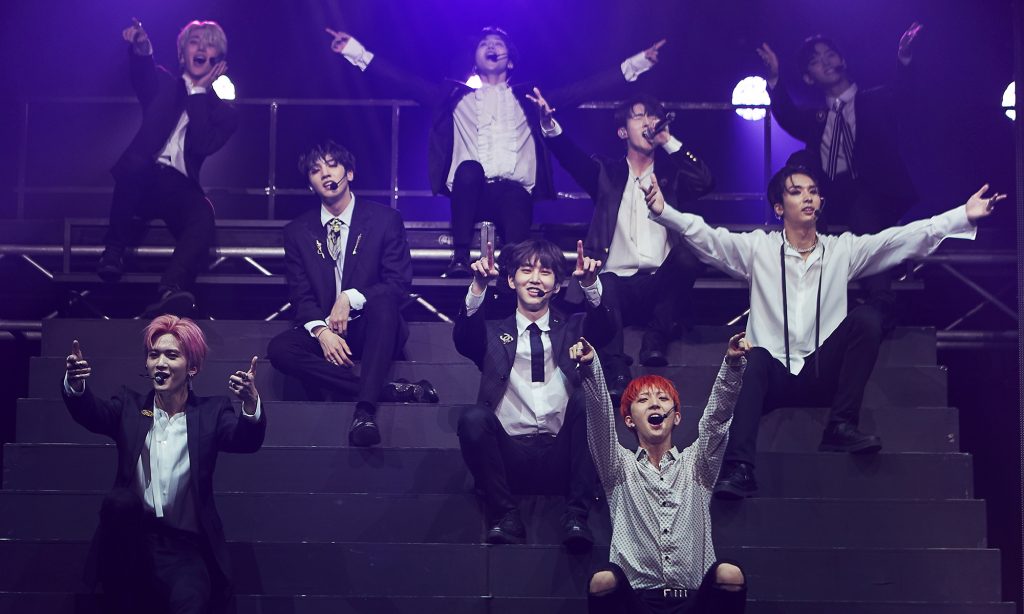 For a group of talented performers that all met on a South Korean reality show, PENTAGON are more like a winsome group of brothers than a boy band on a meteoric rise through the global music scene. But here they are — Jinho, Hui, Hongseok, Shinwon, Yeoone, Yuto, Kino and Wooseok — just enjoying each other’s company totally unfazed by the enormous event just around the corner: their first ever U.S. tour.

In between releasing their latest project, the Sum(me:r) EP, and hitting the road in the U.S. this September, the band — unfortunately, ninth member Yan An is currently dealing with medical issues — caught up with us to talk about formative music memories, dream collaborations, life advice and much more for our Ticketmaster 10 interview series.

Dive into the interview below and be sure to pick up tickets for PENTAGON’s September tour in the U.S.

1. What is the first song you learned to sing?

Hui: “The Last Time” by Eric Benet, because he was the first singer that I really liked.

Shinwon: I cannot remember what it was!

Yeoone: “It Will Pass” (“지나간다”) by Bum-soo Kim (김범수). It was the song that I used in my first vocal lesson, and it has a positive message that helps me endure through hard times.

Yuto: “Shake That” by Eminem. I started to rap while listening to Eminem’s music.

Kino: I cannot remember exactly, but I think it was a children’s song.

2. What is your favorite memory of attending a show as a fan?

Jinho: Charile Puth. I really like his songs, and he interacted with the audience more than most performers.

Hui: BtoB. It was really fun and their vocal skills were amazing!

Hongseok: My most memorable show was Jin-young Park’s (박진영) concert. He was so passionate and cool.

Shinwon: Kendrick Lamar, because he is one of my favorite artists.

Yeoone: Jun-il Jung’s (정준일) show was unforgettable because he sings songs that are suitable for my sensibility.

Yuto: Taemin of SHINee. He looks so cool while dancing and singing at the same time.

Wooseok: BtoB’s concert was the best for me. They sang very well and it was really fun. The whole audience could feel their charm at that show.

Kino: Variety. I can show you various things.

Jinho: My parents, because it’s been a few months since we had dinner together due to busy schedules.

Hui: I would like to have dinner with Jinho. He really enjoys his meals, so I can enjoy it with him.

Hongseok: Warren Buffett. There are so many things to learn from him.

Shinwon: Harry Styles, because he is my role model, and I’m a huge fan.

Yeoone: My family. There are not a lot of opportunities to see my family right now, so I would like to have dinner with them if there is a chance.

Yuto: Taemin of SHINee. I’ve been a huge fan since I was young.

Kino: Quincy Jones. I admire him.

Wooseok: Hongseok. He is always busy, so it’s been a while since we’ve had dinner.

Jinho: My grandmother. She hasn’t seen my performances yet.

Yeoone: My child — if I have one when I’m older.

Yuto: My friends in school.

Kino: Quincy Jones. He is a musician I greatly admire. I would wonder how he felt about my performance.

6. What’s the first lyric or song you wrote that you were really proud of?

Jinho: “To UNIVERSE.” I wrote the lyrics because I felt my fans were so lovely, but it was really sad when I sang the song for the first time. I thought it was well written.

Hui: “Shine.” This song was fun to produce, and I also learned a lot while writing the lyrics.

[Translated: “The one who is being hard on the older brother is ‘the only one rather than number one’, only Hyung-gu.” ]

[Translated: “You might fall down, but you will also pick yourself up again. Don’t worry about anything. Here I am, and I trust you.”]

Yuto: “Seasons” from our Japanese album, because I think I wrote it quite well.

Kino: “OFF-ROAD.” I think I put a lot of emotion into that song.

Wooseok: “Domino,” because it is a song I wrote while going through a lot of anxieties.

Jinho: Post Malone, because every song he releases make me crazy.

Hui: Sabrina Claudio, because she is my favorite musician.

Hongseok: BTS. They are really cool and I like them so much, so I’d like to work with them.

Shinwon: The 1975, because I really admire their music.

Yeoone: Coldplay. They write a lot of great songs.

Yuto: Won-jae Woo (우원재), because his rapping is really cool.

Kino: Ariana Grande, because her music is trendy and good.

Wooseok: Dong-gyun Ha (하동균), because he sings really well and has an attractive voice.

Kino: Trendy things, because our performances are trendy.

“I do it for myself and the people who believe in me.” – Jinho

Jinho: I do it for myself and people who believe in me.

Hui: I always strive to have great performances for the PENTAGON UNIVERSE [the band’s fanbase].

Hongseok: For myself and the UNIVERSE. This is the work I like to do, and the fans motivate me to do this work.

Shinwon: I do it for happiness, because I hope to make all the people that I love happy.

Yeoone: I do it for myself, because I can take care of all my people if I live for myself.

Yuto: For myself, because this is the work I really want to do.

Kino: Definitely for the UNIVERSE. There cannot be any other answers.

Wooseok: For the UNIVERSE. If there were no UNIVERSE, there would be no PENTAGON.

Jinho: Do not live with regrets.

Hongseok: Happiness is what you make it.

Shinwon: Everything happens for a reason.

Yuto: Do the best you can.

Kino: Only one rather than number one.

Wooseok: Live for others.