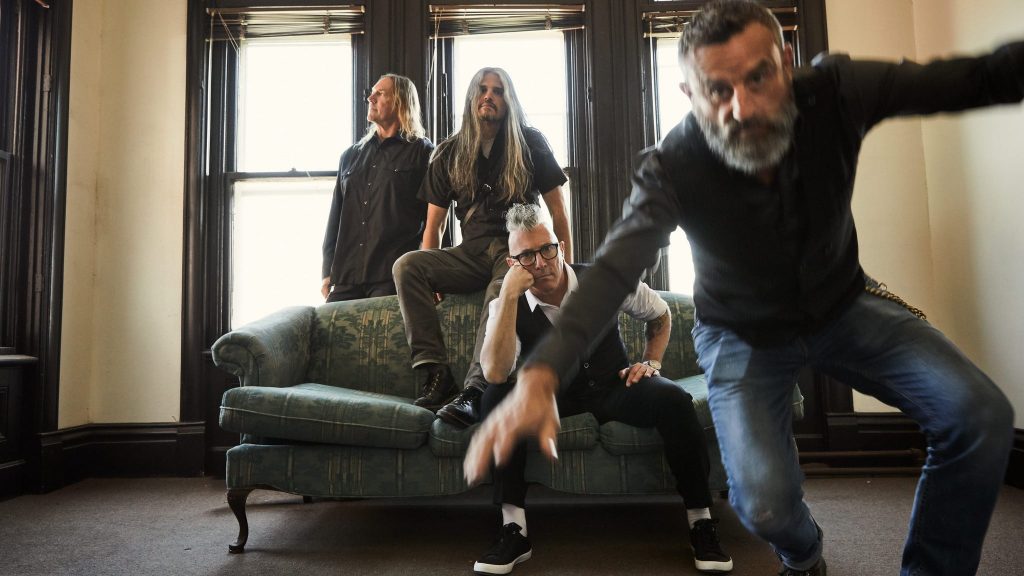 Tool drummer Danny Carey is one of rock’s most celebrated skinsmen, a hurricane of muscle, precision and brain-boggling polyrhythms. But his instruments don’t stay in impeccable performance condition on their own. It’s the job of longtime drum technician Joe Paul Slaby to make sure Carey’s massive drum kit stays tuned, functional and booming in amphitheaters and arenas around the world.

Slaby got his start doing tech work for artists like Jane’s Addiction, Primus, Siouxsie and the Banshees, Debbie Harry and others, and launched his long relationship with Tool when the band were stealing spotlights at Lollapalooza in 1993. This year, Tool are touring in support of their long-anticipated fifth album, Fear Inoculum, and Slaby is still managing Carey’s sprawling drum kit and bespoke electronics setup. We caught up with Slaby to talk about the particulars of his job.

Ticketmaster: How have things evolved in the years you’ve been working with Danny Carey?

Joe Paul Slaby: When [former manager] Ted Gardner first put Tool on tour, they were working with some local guys [who were] basically friends of theirs. Danny has a big kit. It got to a point where he just wanted to hire somebody more professional. That summer, they did Lollapalooza. That was when they were breaking — their videos were being played on MTV. So from that point on, it was like a continual upward trajectory where the crew got bigger and bigger until it is what it is now, which is as big as it’s ever been, with video and lasers and moving stage parts and things like that.

Shortly after I started working for Danny, he brought in his electronic element, which was the SDX, made by Simmons, which was the fanciest thing Simmons ever made. He physically plays all the sounds; there’s no track in the background that they play along to. It gave him a lot of freedom to program any sounds, including things that they had recorded for the record, like the sound of a smashing piano and things like that. We tour with a gong, but there are some songs where he’s playing so quickly that he can’t hit the gong, so we can put the sound of the gong sampled in any one of those pads.

A friend of Danny’s named Vince De Franco built the [Synesthesia Mandala Drum] pad system he currently uses, which is one-of-a-kind. Nobody else has the things that he uses on tour because he designed and built them with an engineer. Danny’s thing is like one step ahead of what’s on the commercial market.

What are your responsibilities for a regular night on the road with Tool?

My responsibilities are to take care of whatever Danny needs for the show. So that means, in the morning, helping unload the truck. While the lights and sound system are going up, before I get access to the stage, that’s my window to repair things, go over notes I have from the last show, change heads, do computer backups, clean things. In every venue the promoter hires runners for our production staff. So if there’s anything I desperately need — like fuses or orange Gatorade or anything like that — that’s going to be important for that night’s show, I put that on a list of things. And sometimes those things are really hard for the runner to acquire depending on where the tour is.

Do you have to adjust the sound of the kit to different venues?

In a different band I would say yes, but at the level where Tool is at, I don’t think that’s the case. I’m usually going for a thing that the audio engineers understand. They want a pure snare sound that fits into the audio mix in the sonic spectrum. So there’s not a lot of room for experimentation.

The kit, even though it’s gotten bigger, is pretty much the same as it’s been since I started working for them. The heart of it is snare drum, kick drums, toms, cymbals and then the electronics. The new record is a different animal; they’re going to be tackling issues that they haven’t ever presented live.

“Danny Carey is a big guy; he’s got big sticks. So we’re doing three or four snare changes a night.”

Can you get into specifics?

On one of two new songs that they played over the summer [“Invincible”], Danny actually plays a synthesizer and it sounds like parts that Adam [Jones, guitarist] would have previously played, but Adam’s too busy doing his guitar parts. So we added a synth to the kit that Danny stands up and plays. It’s called a Virus, and it’s a synthesizer that fans will identify as a sound they’ve heard on other records.

Did you have an interest in or knowledge in electronics when you started, or was it a steep learning curve?

I had interest and I am a musician and a player, but Danny taught me at every step. When we brought that original SDX on tour, it was just like, “Oh my God, what is this thing?”

He is bringing a modular synth setup on tour, right? They’re analog instruments, so not as reliable as a lot of other things.

Yeah, and I agree 100%. Basically the signal path is wires with tiny connections. And then when you travel with gear, it rattles and shakes in the truck, or in the airfreight. It might end up getting affected. Again, that’s the kind of thing I’m correcting in the morning, before any of the gear gets to the stage. On that modular system we spent a lot of time just documenting it. So every connection is labeled and there’s pictures and on every dial the setting is labeled. And even then when we set it up and turn it on, some days it just doesn’t sound right.

So you have a little roadmap for the tangle of wires and the dials.

Yeah. It’s not even a little roadmap — it’s a notebook. And things just changed on it since the last time I’ve seen it. I think that might be the fun of the challenge of working for Danny — he’s always into building a new thing. It keeps you on your toes.

What other responsibilities do you have that are unique to Danny?

You know, these long songs where he’s hitting at high volume the whole show. He’s a big guy; he’s got big sticks. So we’re doing three or four snare changes a night. Even if nothing goes wrong. He’ll go through three or four songs and then turn to me like, “It’s time.” So you’re always changing snare heads regardless of other things that could happen. It’s definitely a “keep you on your toes” type of show.

So gear gets broken?

With Danny, he’s such a physical, big guy. He’s in good shape. He has literally broken the footboard of his kick-drum pedals more than once. It’s not normal for something like that to break, but he has done it more than once. [Tool’s] stage volume is really loud. So for his drums to cut through, they all have a unique character. The snare drum is a drum made by Paiste, and it’s made of melted cymbals. It’s called the Spirit of 2002, because it’s made from that line of cymbals melted down, and it’s really thick. It’s a heavy, heavy drum and it’s cranked up so it’s louder than heck. And he often breaks that head, but he’s also literally broken the lugs because his stick is contacting the rim and the rim is pushing down.

Well, I’ve known Danny forever so I’m really happy to see them release this record, which people had been waiting for so long to hear. And when you’re in Tool’s world, it doesn’t seem like that long because they’d been going out for like a month every year. They’ve matured in a lot of ways. The album is an accurate representation of the guys they are now, rather than the guys they were 20 years ago.