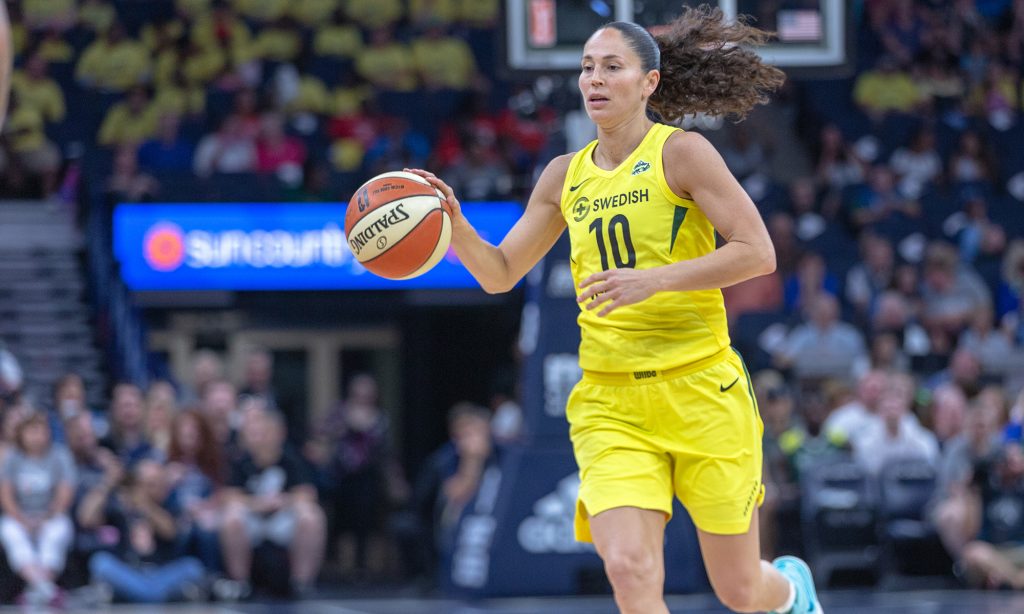 The 2020 WNBA season wrapped on October 6 with the Seattle Storm crowned champions after sweeping the Las Vegas Aces in the Finals. Before awarding the Storm their fourth trophy in franchise history, commissioner Cathy Engelbert intoned the names of several women who’ve become touchstones in the U.S.’s push for racial equality, including that of Breonna Taylor. “We will continue to say her name,” Engelbert said.

These weren’t just casual words. The whole season had been dedicated to Taylor and the #SayHerName Campaign. Engelbert’s comments at the ceremony were affirmation of what had already been made clear: the WNBA is leading the way when it comes to leveraging athletic platforms for calls for social justice. This year, the WNBA championship games enjoyed an impressive increase in viewership compared to years past. There were 34 percent more eyeballs on Game 3 compared to 2019, and 15 percent more on the finals overall. These women are eagerly using that position in the public eye to help effect change. Here are four players who especially stood out for their calls for change.

It’s been 150 days since Breonna Taylor was murdered in her sleep by Jonathan Mattingly, Brett Hankison, and Myles Cosgrove—and her killers have not been charged. Too often Black women who die from police violence are forgotten. Let’s stay loud, keep demanding justice for Breonna and her family, and SAY HER NAME. Proud to stand with @wnba players in joining this campaign, created by @phenomenal in partnership with the Breonna Taylor Foundation, to which all profits will be donated. (Art by @arlyn.garcia)

With this Storm title, Sue Bird became the third player in NBA and WNBA history to win championships in three different decades. Her game has done the talking for her entire future Hall of Fame career, dating back to her days at UConn at the turn of the millennium, but she took her legacy to another level when she decided to use her voice off the court.

Seattle drafted Bird first overall in 2002 and went on to win chips in 2004 and ‘10 before entering a rebuild in ‘15. “I was like the last player standing, so to speak, and we drafted these two young players,” Bird told The JJ Redick Podcast with Tommy Alter in March, referencing Jewell Loyd and two-time Finals MVP Breanna Stewart. “That was when I realized, like, ‘Oh, I can kind of really leave my fingerprints all over them, all over this franchise,’ and that’s when legacy started to creep in as more important than winning.”

We will no longer be silent.✊🏾🖤 #TogetherWeStand #JUNETEENTH #BLM

Natasha Cloud was drafted No. 15 overall by the WNBA’s Washington Mystics in 2015. She had a career-best campaign in 2019, averaging 9.0 points and 5.6 assists, as the Mystics claimed their first-ever title. But Cloud opted out of the 2020 WNBA season, which meant forfeiting her salary, to “continue the fight on the front lines for social reform,” and she shared on Instagram that she feels a sense of responsibility to herself, her community and her future children.

Cloud is one of several players to opt out, and it goes without saying that anyone taking this stance is brave. But even before the season began, Cloud was putting in work. The 28-year-old WNBA champion marched alongside protestors in Philadelphia before organizing a march in support of Black Lives Matter from Capital One Arena to the Martin Luther King Jr. Memorial in Washington, D.C., on June 19, or Juneteenth, a day that marks the liberation of slaves. In a nod to her extraordinary efforts, Sports Illustrated named Cloud as one of the most influential women in sports in early October.

Cloud has since been encouraging people to vote and supporting her teammates from afar.

Tiffany Hayes ascended the ranks in college at UConn, helping the historic program to two national championships, before the Dream snagged her in the second round of the 2012 draft. The 31-year-old has already become the franchise’s all-time three-point leader with 273 made field goals, but she decided to put all of that on pause by opting out of the 2020 campaign.

“This was not an easy decision but I believe it is in my best interest with everything that is going on right now,” Hayes wrote on Instagram. “Although I love playing this game, I believe there are much more important things to be thinking about in this moment.”

Goodmorning good people, It’s Hoopers Vote day and @elliotgerard outdid himself with this one 🥳 I’ve been Remembering the 3rd of November while understanding it takes More Than a Vote. Thank you to my guy @iambenlyons for excelling at everything you do. Hoopersvote.org #vote #mtav #mem #RememberThe3rd #hoopersvote #rockthevote

Renee Montgomery has been the picture of consistency in her career. The 33-year-old was originally taken fourth overall by the Minnesota Lynx in the 2009 draft, and she captured two titles with the team after being traded back to Minnesota in 2015. Since 2016, the UConn alum has played in every regular-season game for the Lynx (2016 and 2017) and the Dream (2018 and 2019). Most recently, Montgomery set the Dream franchise record for most consecutive games with a made three-pointer (24) last season and became just the 13th WNBA player to sink at least 500 career triples.

In 2020, Montgomery decided to channel that work ethic off the court.

“There’s work to be done off the court in so many areas in our community,” she tweeted June 18. “Social justice reform isn’t going to happen overnight but I do feel that now is the time and Moments equal Momentum. Lets keep it going!”

Montgomery wrote an extremely thoughtful personal essay for The Players’ Tribune and outlined everything that went into her decision. Her mother’s experience living in Detroit during the 1967 riots and witnessing history repeat itself in Atlanta awoke something inside Montgomery that made her to want to be an active part of the call for change, even if it’s as simple as handing out water bottles to protestors Centennial Park.

“I’m doing this for my nephews,” she wrote. “Either of them could be the next hashtag.”

Musicians' charitable organizations are finding more ways to help than ever this year.