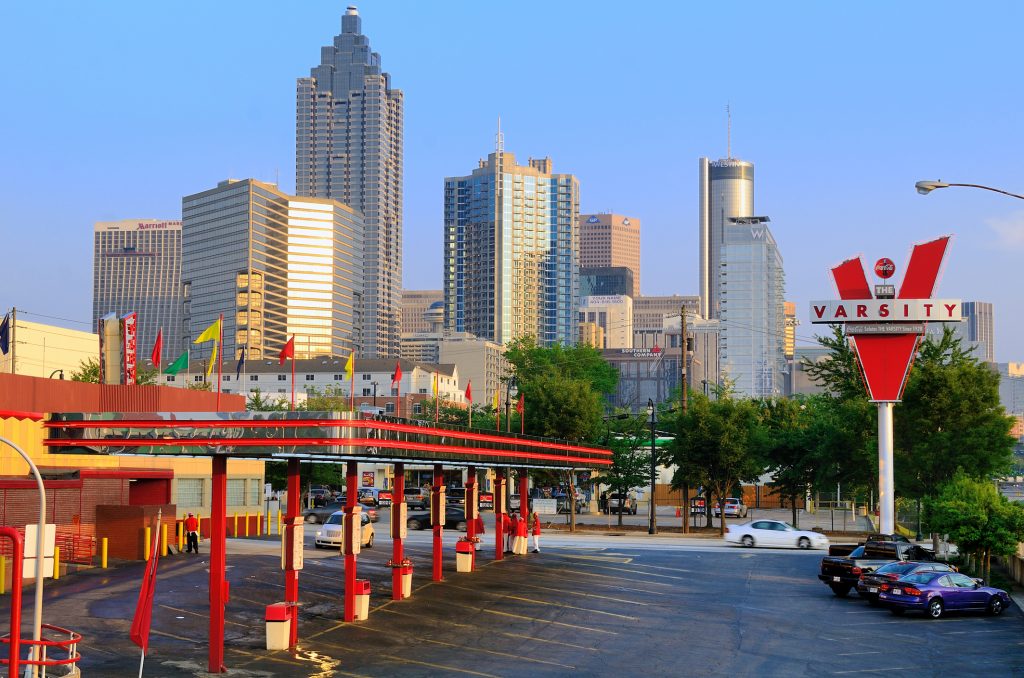 Atlanta is a hip-hop and rock hotspot, although the Southern city’s diverse artistic charms — as seen in its many refurbished historic theaters and sparkling new venues — ensure that ATL has something for everyone. Whether you’re looking to catch a Hawks game or the Next Big Thing in music, here’s the scoop on where to go before and after you see the best sports, theater and bands in the city

Although there are plenty of concession options at Mercedes-Benz Stadium itself — including affordable meal items with “fan-first” prices — the area surrounding the venue also boasts a few go-to spots.

The Mercedes-Benz Stadium’s pre-game food options in the neighborhood also work for State Farm Arena, too. And the latter, it should be noted, prides itself on fan-friendly concession pricing — including a $2 jumbo pretzel and $3 bottled soda.

Ron likes large pizza. Listen to Ron. Today’s the last day to get a free upgrade to a large pizza when you order online. Link in bio. (U.S. locations only, expires 9/12) #BlazeBigger #UpgradeTheWayYouPizza

Thanks to its proximity to the Cobb Galleria Centre event space and Cumberland Mall, there are plenty of places to grab a meal before a Cobb Energy Performing Arts Centre event.

You’ll have to drive a mile or two to find non-venue eating options near the Ameris Bank Amphitheatre, but the suburban locale offers solid pre-concert choices.

The best food and drink options near the Cellairis Amphitheatre at Lakewood are a short drive or a nice long walk away.

The Fox Theatre is near several fine establishments that showcase Atlanta’s culinary brilliance.

Fans heading to the Coca-Cola Roxy have an abundance (and variety) of food and drink options from which to choose, owing to the venue’s location in the Battery Atlanta, a bustling development in Cumberland near SunTrust Park.

Craving Bison? This July, visit Ted’s, snap a pic of your Bison entrée and tag with #TedsVermejoVacation for a chance to win your way to Vermejo, a Ted Turner Reserve in New Mexico. Check out the link in our bio for details! (Ends 7/26) #TedsMontanaGrill #contest #NationalBisonMonth #OnlyAtTeds

Right across the street from the Tabernacle, there’s an array of options to satisfy your tastebuds.

Buckhead is known for its restaurants, which means there’s no shortage of eateries to try before a concert at Buckhead Theatre.