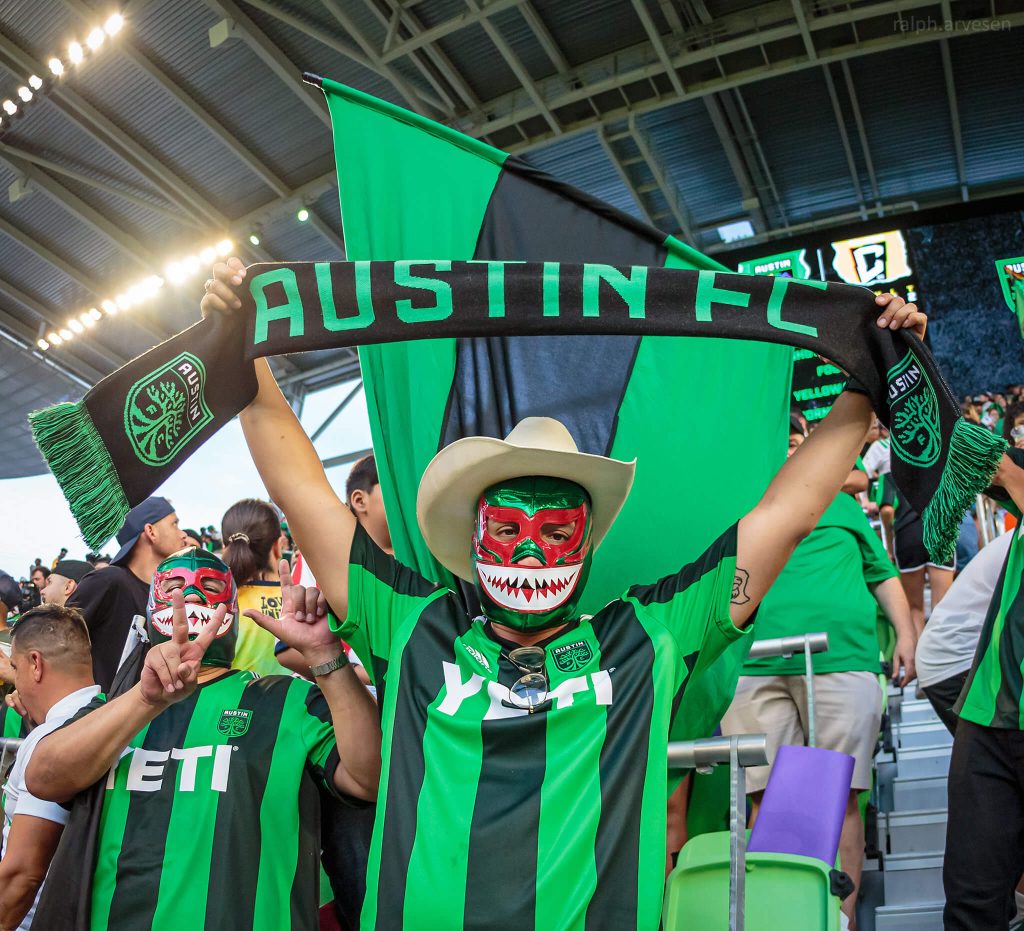 What are the Austin FC Supporters’ Groups Called?

Who Are Austin Anthem?

Austin Anthem is an independent, volunteer-run soccer supporters group for Austin FC. Austin Anthem was founded in 2013 with the intention of bringing Major League Soccer to Austin.

Austin Anthem was originally founded on December 7, 2013, as a community movement to help promote Austin as a potential market for a Major League Soccer franchise. Its original goal was to generate support from soccer fans, city officials, an ownership group, and the MLS. Today, Austin Anthem has been rebranded as a supporter group with a goal of community engagement and philanthropy.

Where Does the Austin Anthem Sit?

Austin Anthem holds matchday get-togethers for Austin FC fans at Circle Brewing Co in Austin. Membership is not required, but is free for all if you’d like to join.

How Does the Austin Anthem Show Team Pride?

Austin Anthem has a variety of songs, chants and cheers to show their support. They named the club “Austin Anthem” to represent the city’s connection to music. The club’s official website says they are “collectively the ‘Song Of Our City,’” adding, “It doesn’t matter if you can’t sing or never have played an instrument. If you’re passionate, we’ll help take care of the rest.”

How Do I Join Austin Anthem?

Who Is La Murga de Austin?

La Murga de Austin is an all-volunteer brass and drum band consisting of Austin FC fans and musicians of all skill levels. According to their official website, “Our goal is to help Austin FC win on the field with excitement and style through our songs and chants. We perform locally at parades, festivals, and other events to bring community pride and fútbol culture together.”

La Murga translates into English as “a band of street musicians” and draws inspiration from a popular form of musical theater performed in Montevideo, Uruguay; Panama; Argentina; and Badajoz, Spain, during the Carnival season.

La Murga de Austin assembles at the supporters section on Q2 Stadium’s south end. Band members must have tickets to matches in order to participate.

La Murga de Austin mainly does covers of popular songs from all genres and decades, updating them to be Austin FC-themed.

How Do I Join La Murga de Austin?

La Murga de Austin is always looking to grow its band with performers who: play brass or drums, can lead chants, want to wave flats and hold banners during performances, or write and suggest songs and chants. For more information on how to join, you can email the group or follow them on Twitter, Facebook, or Instagram.

Who Are Los Verdes?

In addition to supporting Austin FC and being a destination for Austin soccer fans, in 2022 Los Verdes raised more than $55,000 for the families of the victims of the Uvalde, Texas, elementary school shooting.

Where Do Los Verdes Sit?

Los Verdes typically meets before each game at a rotating list of local Austin breweries. For those who can’t attend a match in person, Los Verdes hosts watch parties at Hopsquad Brewing Co. before and during each match (details are available on Los Verdes’ website).

Los Verdes are big supporters of La Murga de Austin and frequently sing the band’s songs and chants as a way of showing support. Songs and chants lyric sheets are available on Los Verdes’ website.

How Do I Join Los Verdes?

Membership information is available on Los Verdes’ website. Joining will get you some themed swag, access to the club’s Slack channel, voting privileges, and discounts from local merchants. An annual membership costs $35 plus shipping.

Who Are the Burnt Orange Brigade?

The Burnt Orange Brigade is an independent club of Austin FC supporters for University of Texas at Austin students, faculty and staff.

Where Do the Burnt Orange Brigade Sit?

There is little public information about the Burnt Orange Brigade, but anyone can reach out via the club’s Twitter and Instagram pages. UT Austin students, staff and faculty can also visit the club’s sign-up page here.

How Do I Join The Burnt Orange Brigade?

Who Are the Oak Army New Braunfels?

Where Do the Oak Army New Braunfels Sit?

How Do I Join The Oak Army New Braunfels?