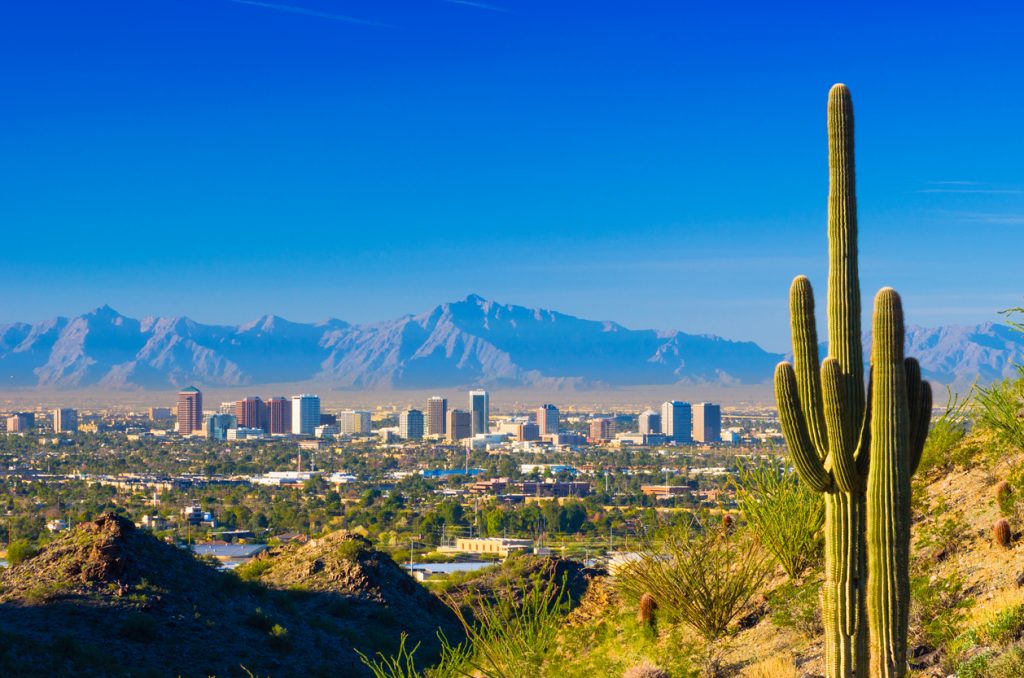 From sports, to tours, to special annual events – the year-round live calendar in Phoenix is as hot as the desert. Here are all the essential spots playing home to entertainment in the Valley of the Sun.

Gila River Arena in Glendale, less than 15 miles from downtown Phoenix, is home to the National Hockey League’s Arizona Coyotes, who have have hosted three NHL playoff contests since the venue opened (then named Glendale Arena) in 2003. As a concert venue, Gila River seats up to 19,000 people and features legacy superstar acts such as rock gods KISS, The Rolling Stones, and the Eagles, plus pop icons Taylor Swift, Justin Timberlake, and Katy Perry. Gila River also serves up events for the whole family, from Cirque du Soleil to PBR’s Built Ford Tough Series bull-riding tour. When the Gila River Indian Community cinched naming rights in 2014, this was the first such deal struck between a federally recognized Native American tribe and a major-league sports arena.

What. A. Night. Thank you @wwe for bringing #RoyalRumble to Arizona and thank you fans for making it unforgettable.

Talking Stick Resort Arena, located downtown next door to Chase Field, has been the home of the Phoenix Suns since 1992, which was NBA All-Star Charles Barkley’s MVP season. In 2007, the Suns organization won 12 Emmys for a video of their NBA playoff series appearance here. The Talking Stick’s 2003 renovation added a 16,500-square-foot glass atrium where fans can literally chill out before events. The light rail drops fans off right outside, and it’s an easy walk to downtown attractions. Beyond sports, the 18,000-seat concert configuration brings such major acts to Phoenix as Ariana Grande, Paul McCartney, Michael Bublé, Carrie Underwood, and Iron Maiden, as well as WWE tournaments and touring comedians.

Twelve miles west of Phoenix, off Interstate 10, AK-Chin Pavilion has the largest concert capacity of any venue in the Phoenix area, with 8,000 seats under the pavilion and an additional 12,000 lawn and hillside seats. AK-Chin, launched as Desert Sky Pavilion in 1988, is hosted by the AK-Chin Indian Community. Billy Joel performed at the amphitheater’s inaugural concert, and every summer since, AK-Chin, the home of Mayhem Festival since 2008, has accommodated renowned tours such as Lollapalooza, Lilith Fair, and OzzFest. Green Day shot their “Cigarettes and Valentines” video here, and Fall Out Boy recorded their 2008 live album at the amphitheater, then named Cricket Wireless Pavilion. Other big headliners have included Future, Santana, Florida Georgia Line, Dave Matthews Band, Nine Inch Nails, and Bon Jovi.

Touring artists who want a midsize theater — smaller than an arena, but bigger than a nightclub — find the 5,000-seat Comerica Theatre a perfect performance venue. Located in the Government District, walking distance from downtown’s larger arenas and three blocks off the 1st and Jefferson light-rail stop, Comerica opened in 2002 with Harry Connick Jr. The theater’s three levels of seating and state-of-the-art sound and light systems make the space ideal not only concerts but also for comedy, variety, and dance productions. Blue Collar Comedy Tour: The Movie was filmed here, as well as George Lopez’s 2007 HBO special. Music stars who have graced Comerica’s stage include Janet Jackson, Lorde, Lana Del Rey, and Meek Mill, and the theater is well-suited to family entertainment like the Rockettes, Dancing with the Stars, and PAW Patrol Live.

Ever wondered what the story is behind our sliding glass doors? Crescent Ballroom used to be known as F.L. Garage, an auto-repair garage built in 1917!

The Crescent Ballroom on 2nd Avenue in Downtown Phoenix occupies the former F.L. Hart garage, a 1917 building at the heart of Phoenix’s urban boom. A midsize, independent concert hall with a 500-person ballroom floor capacity and a full-service restaurant, the Crescent is an excellent place to gather, either to hang out in the lounge or take in live entertainment inside the hall: bands (The Church, Parachute, Mike Doughty), DJs and dance parties, jazz and cabaret acts (Pandora DeStrange), comedians, and spoken word (The Moth). Right off the 1st and Van Buren light rail stop, the Crescent serves drinks and a full menu until midnight seven days a week.

‘Twas a glorious weekend of new works with @balletarizona this past weekend. Thank you to everyone who joined us at @orpheumphx • Free public tours on Tuesday at noon & 1pm! Meet under the marquee! #orpheumphx #phoenix #dtphx #phx #theatre #orpheum #LHAT

Founded in 1929 as part of the vaudeville circuit and later a stop on the national Broadway tour, the Orpheum Theatre — on the National Register of Historic Places for its design, history, and restoration — is part of the Phoenix Convention Center network operated by the city. A cultural hub in Phoenix in the heart of Downtown, the Orpheum is the home of the Phoenix Opera. It features an intimate, well-lit stage and gorgeous Baroque/Spanish Revival ornamentation, and in addition to the opera it hosts Broadway musicals, intimate concerts and personal appearances, variety and comedy shows, and Ballet Arizona. The Orpheum seats 1,364 in orchestra and balcony sections. Whether you come to see a performance of Evita or a taping of the Tonight Show when Jimmy Fallon takes it on tour, the Orpheum is truly a destination venue.

Two nights with @spaffordmusic was an amazing way to kick off 2019! Thanks to everyone who came out and partied with us and @wyvestheband for playing on Sunday! #thevanburen #dtphx

A relatively new concert hall in Downtown Phoenix, The Van Buren opened in 2017 with a sold-out show featuring Cold War Kids. The 1,800-capacity venue — a former car dealership — is situated in Phoenix’s historic old automotive district a few blocks from its sister club, the Crescent Ballroom, and three blocks from the 1st and Van Buren light-rail stop. The room is a sight to behold, revamped with chandeliers and Instagram-worthy fittings and floor tiles. Major touring acts  who want to play an intimate room come to the Van Buren, including hip-hop stars DMX and Flying Lotus; indie rock acts such as Neko Case and Portugal. The Man’ and variety shows as varied as Chippendales and Welcome to Night Vale.