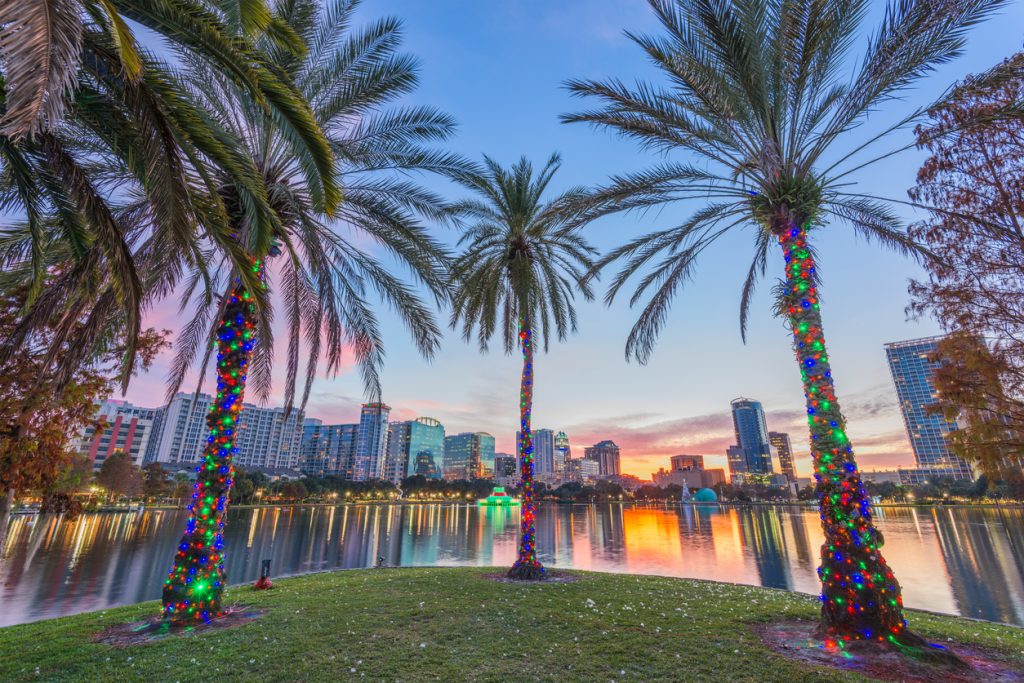 When people say, “I’m going to Orlando,” it’s generally accepted as shorthand for a Disney vacation. But this city planted nearly in the center of The Sunshine State has thriving music and sports scenes, and a short road trip to the east or west opens up even more possibilities for places to take in some high-quality entertainment.

Rock the weekend and join us for late night happy hour in the House of Blues Restaurant & Bar! 🍻 Enjoy food and drink specials this Friday & Saturday from 10PM – close! Peep our Happy Hour menu at the link in our bio! • • • #HOBOrlando #Orlando #HappyHour #DisneySprings #LateHappyHour

Located in Downtown Disney, the 2,600-capacity House of Blues Orlando is one of the premier concert venues in the city. Acts that travel into Florida usually make a stop at the venue, spanning many different genres, despite what its name might lead you to believe. You can catch OneRepublic one night, a tribute to Aretha Franklin the next, and rock out with Shinedown too. House of Blues also features a restaurant on the premises, serving the satisfying fare you’d expect at an American-style eatery. There’s not really any visible Disney influence within the venue, but it’s magical all the same.

Beautiful shot of our arena 😊☀️ #HappyFriday #Repost @ucf.edu ・・・ No place we’d rather be 🌤 Tag your out-of-state friends who are missing out on this FL winter 😏 (📸: @so_narly)

The University of Central Florida’s Knights take the court for college basketball games at the campus’ 9,000-seat CFE Federal Credit Union Arena. The arena cost $107 million when it was built, breaking ground on September 8, 2007. Like most college-specific arenas, it’s used year-round for events, though basketball is clearly its reason for existence. However, its most historically significant event was a political one, as the arena was the site of the final presidential debate in 2008, pitting Senator John McCain against soon-to-be President Barack Obama.

It’s almost time! Doors are about to open for the @OrlandoMagic’s 30th season. 🏀 #PureMagic #AmwayCenter

The Orlando Magic have plied their craft at the Amway Center since its construction in 2010, relocating from the similarly named Amway Arena. The newer venue is located in the heart of downtown Orlando, right off the I-4 interstate and near the recently built Orlando City Stadium, putting the Amway Center in the middle of Orlando’s sports sector. The nearly 19,000-capacity arena is also host to bigger concerts that come through the middle of Florida, such as Sam Smith, Jay-Z, and the Enrique Iglesias/Pitbull double bill.

We’re thrilled to announce that the St. Augustine Amphitheatre has been voted as the 2018 Bold City Best “BEST LIVE MUSIC VENUE”! A big thanks to everyone that voted for us! We love nothing more than providing you with the best concert experiences around! 📸 @brentculbertsonphotography

About two hours north of Orlando, you’ll find St. Augustine, which lays claim to being the oldest city in the continental United States, having been settled in 1565 by Spanish explorers. To celebrate that historical beginning, the city built the St. Augustine Amphitheatre in 1965, the city’s 400th birthday. The outdoor venue hosts plays, other exhibitions, and many concerts each year; some past shows include the late Aretha Franklin, Weezer, and Bob Dylan. It also was the site of the play Cross and Sword, a musical depiction of the city’s first days that was written by Paul Green and ran from 1973 through 1996.

#Repost @jaguars ・・・ Fill it with noise.

If you don’t mind the drive to St. Augustine, you probably won’t mind going a little further for some football. The TIAA Bank Field in Jacksonville hosts the NFL’s Jaguars on Sundays, its 68,000 seats filled with teal-wearing fans. Built in 1995, the former Jacksonville Municipal Stadium has been the Jags’ only home for their entire existence in the NFL, and it has also hosted the annual Gator Bowl in college football since 1996. When not serving as a gridiron, TIAA Bank Field has featured heavyweights of music, including U2, Kenny Chesney, and Orlando’s own NSYNC.

While you’re in Jacksonville for a Jags game, make sure you check out the Times-Union Center for the Performing Arts, renovated in the mid-’90s and located right on the St. Johns River. The 2,900-seat Moran Theater is its premier room, hosting symphonies, concerts, plays, and comedy shows throughout the year. You might catch R&B mainstays performing in its beautiful ballroom, or laugh until you cry with a host of comedians; the Moran Theater is notable for its versatility. The Times-Union Center also hosts events in its lobby.

The crown jewel of the ESPN Wide World of Sports complex at Walt Disney World is the Champion Stadium, a 7,500-seat baseball stadium constructed in 1997 that currently hosts the Gulf Coast League Braves, Atlanta’s rookie-level minor-league team. Champion Stadium was the home of spring training for the Atlanta Braves from 1998 through 2018, and continues to host professional baseball right in the middle of the most magical place on earth, which merits at least a visit and a tour to the friendly realm of Mickey Mouse.

A short drive west on I-4 will get you from Orlando to Tampa, where you can find the MIDFLORIDA Credit Union Amphitheatre at the FL State Fairgrounds. The largest venue specifically designed for concerts in the Tampa Bay Area, the amphitheater boasts a capacity of 20,000, half of which are lawn seats. In addition to single-serving shows, the venue also hosts festivals that pass through the Tampa area, including the yearly 97X Next Big Thing, an alt-rock extravaganza that takes place every December. The amphitheater is a frequently visited location for bands including 311, Rascal Flatts, and Dave Matthews Band.

The self-crowned “Coliseum of Rock” is Orlando’s theater venue of choice, clocking in at 3,000 seats for its live shows and concerts. Whereas House of Blues sits squarely in Downtown Disney, Hard Rock Live takes up residence at Universal Studios CityWalk. Not only does the venue rock with top-tier acts each night, but it also has a solid niche as a comedy venue, with notable stand-ups and impersonators taking the stage in the heart of CityWalk. In a curious quirk, Hard Rock Live Orlando also features a segment from the Berlin Wall outside its entrance; the connection might not be clear (Pink Floyd, maybe?), but it’s a significant piece of history nonetheless.

The 60,000-seat former home of the University of Central Florida Knights may have lost a high-profile tenant when the school moved to its own stadium, but Camping World Stadium stills holds high-level events like WrestleMania, soccer tournaments (such as the World Cup in 1994 and the Copa America Centenario in 2016), and of course, the Citrus Bowl, a New Year’s Bowl that usually pits top 25 college football teams against each other. Fun fact: Camping World Stadium was also the site of the climactic Bourbon Bowl in the 1998 Adam Sandler film The Waterboy.