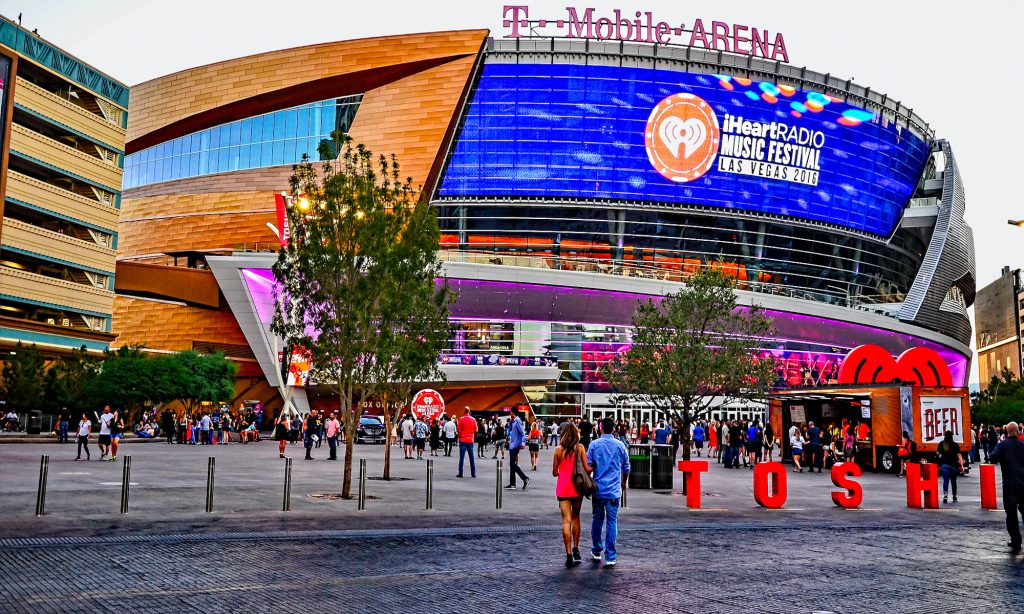 The 20,000-capacity T-Mobile Arena might be considered a relative newcomer compared to a lot of America’s other high-profile venues, but it’s already managed to carve out a pretty impressive niche for itself. Since it opened in 2016, the arena has hosted a killer combination of sports and music. When it comes to entertainment, Las Vegas is just about as iconic as you can get, but this modern-looking edifice nestled among the casino hotels consistently has a marquee that makes it a major player on the Las Vegas Strip.

Who remembers our opening night concert with @thekillers, Wayne Newton, and @shamir326? Leave a 🖐 if you were there?

Work first began on the T-Mobile Arena in 2014 after years of attempts by a number of entities to build a new venue of major proportions on the strip. It was MGM Resorts International, in a partnership with the Anschutz entertainment Group, who were finally able to get the project off the ground.

The first event was a “soft launch” on March 31, 2016, featuring country superstar Martina McBride. On April 6, the arena had its true grand opening, honoring its hometown by bringing out Vegas’ favorite sons The Killers, along with old-school Las Vegas legend Wayne Newton, in what one would have to assume was the first time those two acts had shared a bill.

@kissonline came out and ROCKED the house last night! 🔥🎸

The relationship between the T-Mobile Arena and the NHL‘s Vegas Golden Knights began in 2017 when the Knights (at the time, a team even newer than the arena) played their first game at the venue. Besides serving as the home of the Knights, the arena has also been a boon to sports fans by presenting events like the UFC‘s mixed martial arts and the PAC-12 Men’s Basketball Conference. It’s hosted the Professional Bull Riders World Finals and the UNLV men’s basketball team, and it was even the site of the 2018 Stanley Cup games between the Washington Capitals and the Golden Knights, the latter reaching the finals for the first time ever.

The T-Mobile Arena has also proven to be a godsend for music lovers of all kinds. The venue’s stage has welcomed top-tier talent in multiple genres. Country stars like the Zac Brown Band, classic-rock legends such as Eric Clapton and Fleetwood Mac, hip-hop heroes like Chance the Rapper and T-Pain, pop titans Miley Cyrus and Michael Bublé and even renowned Dutch violinist and conductor Andre Rieu and his Johann Strauss Orchestra have drawn crowds there. The arena has become a go-to spot for esteemed awards ceremonies in the music world too, including the Latin Grammys, the Academy of Country Music Awards and the Billboard Music Awards.

It’s no challenge to slay an appetite here. You can hit Capriotti’s Sandwich Shop for everything from cheesesteaks to all sorts of subs. Sushi lovers looking for something different can stop at the Tail & Fin to fill up on a sushi burrito and poke bowl. Barbecue hounds can sink their teeth into a brisket sandwich or even a vegan option at Rollin’ Smoke Barbecue. If all of the above don’t whet your appetite, then you’re bound to find your bliss somewhere between Pizza Forte, The Shake Shack and Pink’s Hot Dogs. And when it’s time for dessert, you can enter ice cream heaven at Cool Intentions, or tuck into some pastry at Freed’s bakery.

And if you want to bring something home as a souvenir of your visit to the arena, make time for a stop at the Armory Team Store, tucked in conveniently right next to the arena’s main entrance. There you can nab all sorts of Golden Knights gear: jerseys, hats or any number of other things that celebrate the team that makes the T-Mobile arena its home.