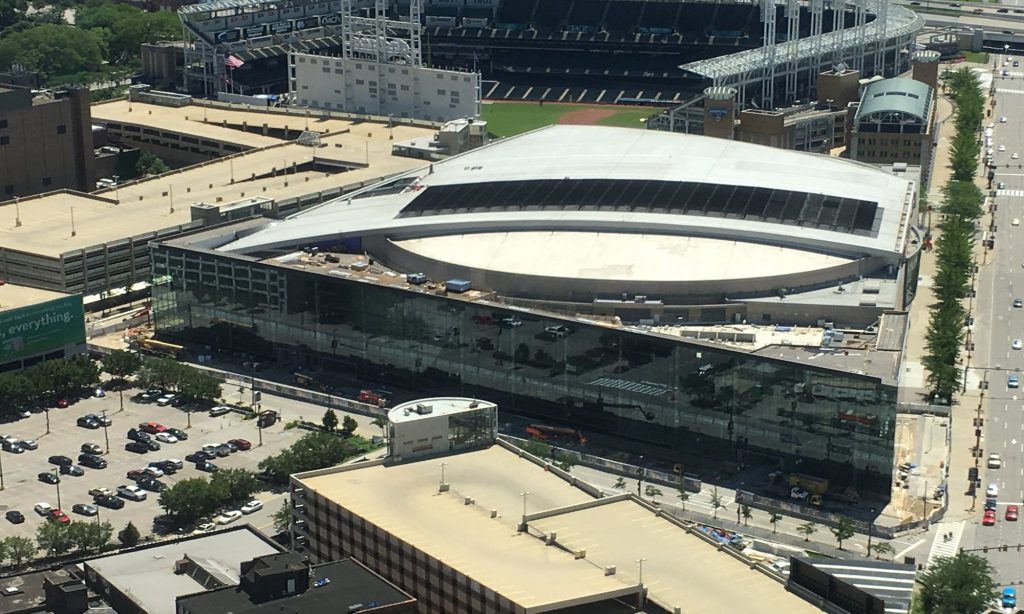 Cleveland‘s Rocket Mortgage FieldHouse offers passionate sports and music fans some of the best entertainment options in Ohio. Originally opened in 1994, the indoor arena is the home of the NBA‘s Cleveland Cavaliers, as well as hockey’s Cleveland Monsters, an AHL team affiliated with nearby NHL team the Columbus Blue Jackets.

Repost from our friends at @jackclecasino! It’s @cavs gameday in The Land. Doors open at 5:30PM 💪

A post shared by Rocket Mortgage FieldHouse (@rocketmortgagefieldhouse) on Jan 7, 2020 at 9:40am PST

The Rocket Mortgage FieldHouse is located in the heart of downtown Cleveland, directly next to the Progressive Field baseball stadium, in a bar-and restaurant-heavy area known as the Gateway District. When not hosting sporting events, it books concerts from an eclectic array of musicians, including Michael Bublé, Harry Styles, The 1975 and JoJo Siwa, as well as events such as wrestling, ice skating and monster truck jams.

PUMPED to be hosting a @monstershockey + @cavs double header at the FieldHouse today! Doors for hockey are at noon and doors for basketball are at 6:30 🤙

A post shared by Rocket Mortgage FieldHouse (@rocketmortgagefieldhouse) on Jan 4, 2020 at 7:16am PST

The Rocket Mortgage FieldHouse opened in 1994 as Gund Arena, and was called Quicken Loans Arena from 2005 until 2019. Prior to moving into the arena, the Cleveland Cavaliers played home games at the Richfield Coliseum, a locally revered indoor venue twenty miles south of Cleveland. A desire to have the Cavs play closer to the city, as well the need to have an upgraded stadium for baseball, led to the construction of the new venues.

The Cavs moved into the arena starting with the 1994-1995 season, as did Cleveland’s hockey team at the time, the International Hockey League’s Cleveland Lumberjacks. When the latter team became defunct in 2001, the San Jose Sharks‘ AHL affiliate moved to the city and became the Cleveland Barons. In 2007, after the Barons moved to Worcester, Massachusetts, the AHL franchise formerly known as the Utah Grizzlies relocated to Cleveland and became the Lake Erie Monsters, and then just the Monsters in 2016.

Before the 2019-2020 NBA season, the Rocket Mortgage FieldHouse completed $185 million in renovations that expanded the arena’s footprint — the venue’s public space expanded dramatically, from 95,380 to 152,970 square feet — and added a modern sheen. Of particular note is an eight-story glass façade comprising 1,475 pieces that reflects the city’s skyline and a spacious new atrium, as well as a tunnel-like Power Portal featuring 2,200 square feet of 2.6mm LED panels that doubles as a fan entry point.

Other upgrades include new seats, refurbished luxury suites, upgraded concessions, dazzling multimedia walls and sleek art pieces installed throughout the arena. With the renovations, the arena’s current basketball capacity is 19,432. All the upgrades have prepared the venue to host high-profile events, including the 2022 NBA All-Star Game.

Can we go back to last Friday when @transsiberianorchestra presented by @hallmarkchannel nearly rocked the roof right off of the FieldHouse? What an awesome night in The Land 💥 📸: @jimmydphotos

A post shared by Rocket Mortgage FieldHouse (@rocketmortgagefieldhouse) on Jan 2, 2020 at 7:26am PST

In addition to concerts, the Rocket Mortgage FieldHouse books special entertainment events such as Disney on Ice, Cirque du Soleil: CRYSTAL, WWE Monday Night RAW and WWE Fastlane. However, the fieldhouse also holds 1,400 private events each year thanks to nine separate spaces that can serve parties and meetings of various sizes. The arena is also known for hosting large-scale one-off events such as the Cleveland Bridal Show, the 2016 Republican National Convention and the 2020 NCAA Division I Men’s Basketball Championship First & Second Rounds.

Even before it was called the Rocket Mortgage FieldHouse, the venue has always prided itself on having Cleveland-centric concessions. Celebrity chef Michael Symon has an arena-exclusive place called Symon’s Burger Joint that dishes up delicious grub. Symon is joined by several other eateries with local ties, including Karen Small’s Market at the Fig — a tasty offshoot of the farm-to-table pioneer’s flagship eatery the Flying Fig — Tiwanna Scott-Williams’ comfort-food-heavy Pearl’s Kitchen, and a seventy-five-person capacity version of Rocco Whalen’s esteemed restaurant Fahrenheit. For those who want to sample Cleveland’s local brews, Saucy Brew Works offers a pub with eighteen drafts on tap.

With the renovations, the Rocket Mortgage FieldHouse has also expanded its food options, so fans craving nearly any kind of food can sate their hunger. In addition to arena staples such as hot dogs, nachos, wings and popcorn, eateries offer modern Mexican food, pizza, a pretzel-toppings bar and barbecue from Cavaliers icon Elmore Smith at Elmore’s Smokehouse. Around the arena, thirsty patrons can also enjoy multiple dedicated bar areas, including a Bell’s Brewery, Jack Daniel’s Bar and the Budweiser BrewHouse, which features self-pour drafts and the Loudville Grill.