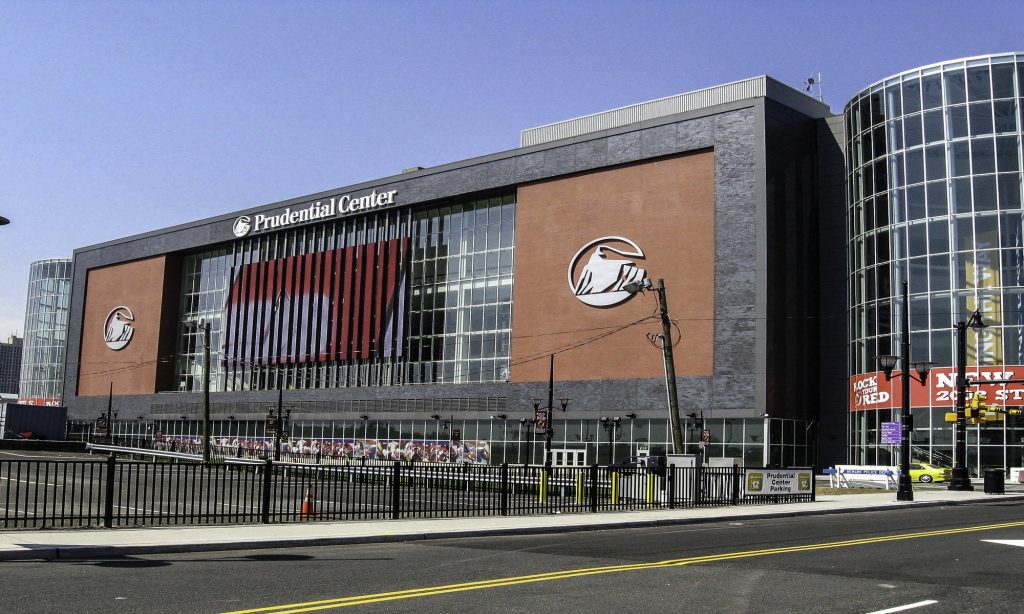 New Jersey’s Prudential Center isn’t called “The Rock” for nothing. A jewel of downtown Newark — with its dark-red exterior serving as an homage to the city’s brickmaking tradition — this arena has stood strong even during the New Jersey Devils’ most boisterous battles. The indoor arena can pack in over 16,500 hockey fanatics, but it’s also brought in sports and music fans of all stripes from the New York metropolitan area and beyond with a schedule that never slows down. The Prudential Center has hosted an array of local and international talents, from ice hockey icons and basketball legends to some of the biggest rock ‘n’ roll stars on the planet — including the New Jersey hero known as the “Boss” himself.

In the 1980s, Newark was on its way to constructing the tallest hotel and building in the world, which would include a large shopping center called the Renaissance Mall. As the 21st century rolled in with little progress on this ambitious enterprise, new plans were made to tear it all down and build an arena. Construction began in 2005, with the Devils putting in a large chunk of money to complete the project. Prudential Financial purchased the naming rights, and locals started referring to the arena as “The Rock,” in reference to the insurance company’s logo, which features the Rock of Gibraltar.

When the Prudential Center officially opened on October 25, 2007, it wasn’t with a rowdy hockey game, but a raucous rock concert including performances by Jersey natives Bon Jovi and My Chemical Romance, along with Big & Rich, Gretchen Wilson, Daughtry and The All-American Rejects. Just two days after, the Devils took to the ice for the first time at their new home with a game against the Ottawa Senators. They may have lost that first match, but the team eventually made the Garden State proud when they clinched the Eastern Conference and advanced to the Stanley Cup in 2012. Later on, from 2016-’19, the Jersey arena also served as the home to the New York Riveters, the professional women’s hockey team.

Aside from hockey, the Prudential Center has also seen plenty of basketball action. In its first year, the arena opened its doors to NCAA men’s basketball with its home team the Seton Hall Pirates. In 2011 and 2012, it hosted the NBA draft. During this period, the New Jersey Nets called The Rock home from 2010-’12, before relocating to Brooklyn, and the WNBA’s New York Liberty played their home games here from 2011-’13.

Even during the busy NHL and NCAA basketball seasons, the Prudential Center squeezes in a variety of other events. Over the years, it’s been used for a multitude of purposes, including WWE shows, UFC tournaments, family-friendly showcases, reality-show auditions and political rallies.

It’s also been an important center for music. In 2017, the Prudential Center unveiled the Grammy Museum Experience, which features interactive exhibits celebrating Jersey’s finest musical talents and troubadours. Two years later, the arena welcomed many of the biggest stars on the planet when it hosted the 2019 MTV Video Music Awards.

The most exciting concerts to swing through the New York metropolitan area will often schedule a stop at The Rock. The Rolling Stones celebrated their final 50th anniversary tour show at the Prudential Center in 2012 and turned it into an all-star bash with special guests including Lady Gaga, The Black Keys and Bruce Springsteen. While rock music has been well-represented at The Rock — with performances by vets such as Bon Jovi, Tool, Fleetwood Mac and Elton John — pop, hip-hop, Latin and gospel stars have found it an ideal concert space as well. Between appearances by artists like Celine Dion, Billie Eilish and Post Malone, the arena has even served as the venue for America’s biggest annual gospel music competition, the McDonald’s Gospelfest, since 2008.

The Prudential Center is just a skip and a hop from one of the most revered culinary capitals in the world — New York City, of course — and that proximity shows in the arena’s diverse food options. Grab a fiery batch of nachos at Goya, a satisfying stromboli at Villa Italian Kitchen, a flavorful chili bowl at Bowled Over or a trio of bite-size sliders (the hat trick) at Slider House Rules.

The Garden State’s own unique delights are also aplenty at concession stands like Jersey Grind, a one-stop shop for drool-worthy burger specialties, and The Boardwalk, which ships in time-tested treats from the Jersey Shore, including cheesesteaks, corn dogs, deep-fried oreos, funnel cake fries and the must-try Italian-American doughy delight known as the zeppole.