Step Inside: Fiserv Forum, Home of the Milwaukee Bucks 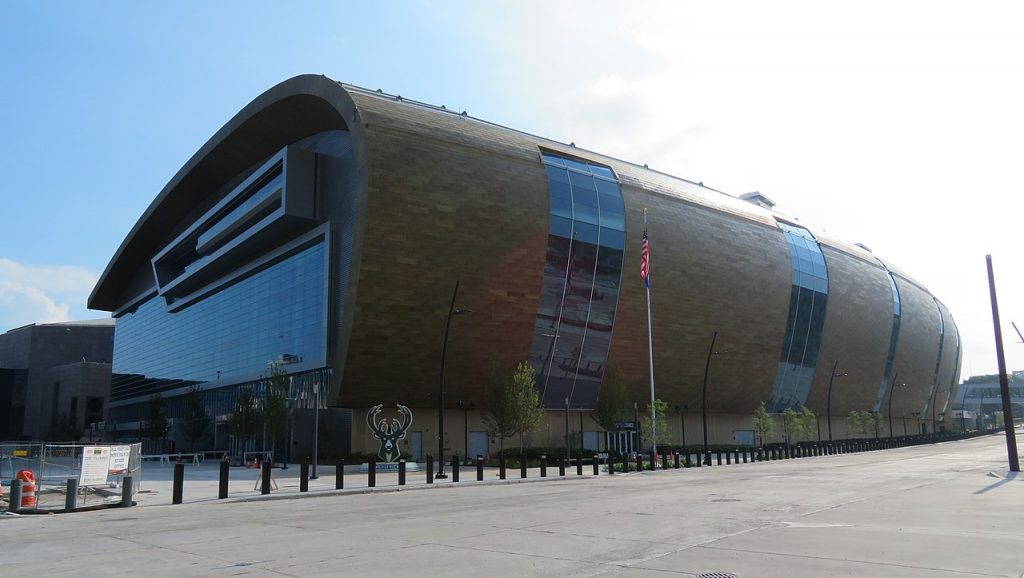 One of the newest arenas in the NBA is something for the city of Milwaukee, Wisconsin, to be proud of. The Fiserv Forum is a state-of-the-art venue just a couple miles from the shores of Lake Michigan, completed in 2018 as the home to the Milwaukee Bucks and to the Marquette University Golden Eagles men’s basketball team. The $574 million facility replaces the BMO Harris Bradley Center, which served Milwaukee for three decades as the city’s sports hub and host to plenty of notable concerts. While the UW-Milwaukee Panther Arena will continue to serve the Great Lakes region, the Fiserv Forum gives Milwaukee a world-class venue for national and international events.

The Fiserv Forum has a capacity of 17,341 for basketball and 18,000 for concerts. The venue is the centerpiece of Deer District, a 30-acre redevelopment zone which will reclaim the former site of the Park East Freeway to form a focal point for downtown Milwaukee. Fiserv Forum is at 1111 Vel R. Phillips Avenue, which was known as North 4th Street before being renamed in honor of Milwaukee attorney, activist, politician and jurist Vel R. Phillips after her death in 2018. It’s convenient to Interstates 94 and 43 with newly constructed parking facilities for hassle-free arrival, and it is accessible through public transportation and rideshare platforms with dedicated pick-up and drop-off zones for Uber and Lyft riders. Once there, fans will be able to partake in over 30 concession stands, featuring both classic stadium fare and local cuisine from such Milwaukee-area landmarks as The Laughing Taco, Sobelman’s Pub & Grill, Cousins Subs and Klement’s Sausage Co., among others.

We’re ready. How about you? #fearthedeer

Though the Milwaukee Bucks made overtures to build a new arena as early as 2009, it was not until 2013 — when then-Deputy NBA Commissioner Adam Silver endorsed their need — that the construction of the Fiserv Forum finally came to fruition. Ground was broken on June 18, 2016, followed by the demolition of the Bradley Center ice-plant to aid in construction of the Fiserv Forum next door. Naming rights were secured in 2018 by Fiserv, a Brookfield, Wisconsin-based financial services technology firm. The Fiserv Forum opened on August 26, 2018, with a ribbon-cutting ceremony, and it hosted its first live event on September 4, when The Killers and Milwaukee’s own Violent Femmes performed. The first regular season Bucks game took place on October 19, with the Bucks defeating the Indiana Pacers, 118-101 in front of a sold-out crowd. The opening of the Fiserv Forum — now lovingly nicknamed the “Four-One-Forum” after the local area code — coincided with the rise of the Bucks as a dominant force in the NBA Eastern Conference.

In addition to its LEED Silver certification through the U.S. Green Buildings Council’s Leadership in Energy and Environmental Design program, the Fiserv Forum is the first arena in the world to be designated as “bird-friendly.” Glass strikes are a major cause of bird death, especially in urban areas, and the Fiserv Forum facade and glass have been specifically designed to mitigate this hazard. Fritting, which places thin strips of ceramic inside glass panes, allows for birds to detect glass before becoming confused by reflections on the arena’s facade, while regulations regarding the arena’s lighting after dark maintain a balance of attracting fans without attracting birds. The Fiserv Forum’s commitment to the environment extends beyond avian safety, through the use of a 100-percent digital ticketing system, the restriction of plastic drinking straws, the use of compostable food packaging and the use of recycled materials, energy efficient plumbing and HVAC equipment and natural landscaping, among other steps.

The nation will turn their eyes to Milwaukee in July 2020, when the Fiserv Forum will host the Democratic National Convention. The event is expected to bring in upwards of $200 million to the local economy in addition to countless visitors to the city. The Fiserv Forum has already hosted such concerts as Bob Seger & The Silver Bullet Band, KISS, Travis Scott, Justin Timberlake, Kevin Hart and many others. The Fiserv Forum appeared on Pollstar’s Winter 2019 list of the 100 top arenas in the world in terms of ticket sales, coming in at No. 59.