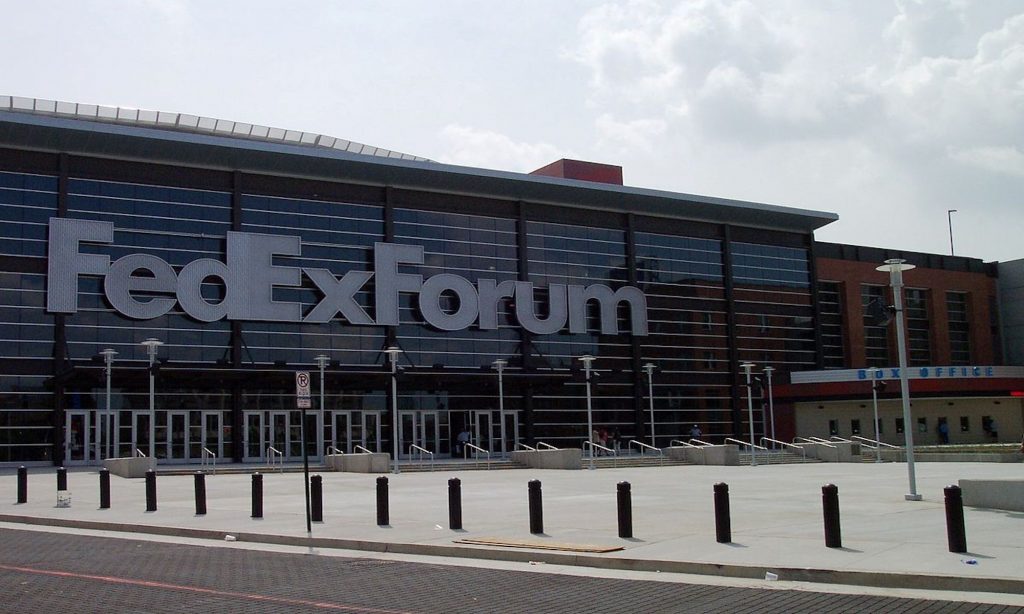 As one of the key spots where the blues was born, Memphis‘ Beale Street has long been a National Historic Landmark. These days the street that the government officially dubbed “The Home of the Blues” has something else to be proud of: The FedExForum. Occupying fourteen acres of downtown Memphis, the domed arena is known best to sports fans as the home of the NBA‘s Memphis Grizzlies, but it’s also the kind of concert venue that legends like Celine Dion and Elton John hit when they come through the South. It can hold up to 19,000 fans for concerts, and more than 18,000 for basketball. Throughout the arena, its connection to Memphis’ rich cultural history is evident from the paintings and murals that adorn the inside, depicting the town’s most beloved musical exports from Elvis Presley to B.B. King and beyond.

One day, two sellouts! Thanks to the over 35,000 fans who came to FedExForum to cheer on @memphis_mbb & @memgrizz today!

On September 6, 2004, the FedExForum was officially opened to the public. Since then, the arena has been the site of plenty of NBA playoffs as well as a ton of high-profile tournaments. As the headquarters for both the Memphis Grizzlies and the University of Memphis Tigers, it’s always been the city’s No. 1 basketball destination, and when you walk through the arena’s Grand Lobby, you can also view the Built Ford Tough Training Facility where the Grizzlies get their practice.

Over time, of course, the Forum has become just as well known for hosting concerts by some of music’s biggest artists. Keeping the arena up to date as a nationally renowned venue for sports and music has meant revamping an already impressive setup. The Forum got a new sound system and basketball court in 2012; five years after that, $1.8 million was shelled out for major renovations that included the scoreboard, video displays and beyond. Just a year after that, ESPN ranked the arena the No. 1 best overall sports venue in the country.

In addition to all the Grizzlies and Tigers home games, the Forum has lots more to offer sports lovers. The WWE, Professional Bull Riders and UFC have all tapped the venue to host events, adding fans of wrestling, rodeo and mixed martial arts to those the arena serves. And when it comes to family events, the Ringling Bros. and Barnum and Bailey Circus, Cirque du Soleil and Disney on Ice are just a few examples of what the forum has had to offer.

Lovers of rock, pop, country, R&B and more know the FedExForum as the first stop for top-tier artists coming to Memphis. On the country side of things, the venue’s stage has seen performances by everybody from Garth Brooks to Blake Shelton. Rock ‘n’ roll titans like The Rolling Stones, Paul McCartney and Tom Petty have all taken the arena by storm. And pop fans have filled the place for Miley Cyrus, Alicia Keys, Bruno Mars, Katy Perry and beyond.

BC Burger stand is now open! Get yours tonight, sec. 110 at #MEMvMIN! #GNG

Naturally the arena’s culinary options maintain a connection with the legacy that comes with being on Beale St. From the 4/4 Grill to the Uptempo, even the names serve as reminders of the area’s musical heritage. Venue visitors can often be found filling up on hot dogs and burgers at the Delta Grill and the World’s Fair, grabbing a specialty beer at Ghost River or chowing down on some serious nachos at Snax.

And that’s only covering the Plaza and Pinnacle levels of the venue. If you venture to the Terrace section, you can visit the Bandstand food court, nab yourself a pork sandwich at the Rendezvous Plaza or soak up all sorts of staples at Rockabelly’s. And for those fortunate enough to indulge in the Premium experience, there’s the Audi Club and its cheesesteaks and paninis, or the Lit Lounge, where you can sink your teeth into their signature burger in style.