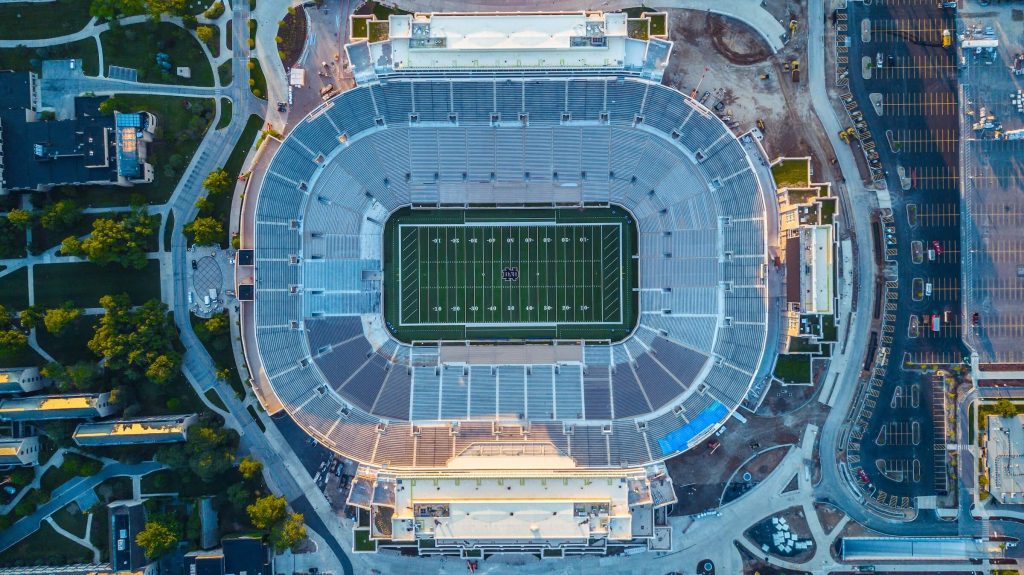 When Do the Notre Dame Fighting Irish and the USC Trojans Play Next?

Are the Notre Dame Fighting Irish and the USC Trojans Rivals?

Yes, the USC Trojans and the Notre Dame Fighting Irish have an intense college football rivalry. Despite most rivalries in college football being geographically based, which makes annual matchups easier to coordinate, Notre Dame and USC are nearly 2,000 miles apart. However, the two teams have played each other every year from 1926 to the present, apart from a three-year gap in the 1940s when the game was canceled due to World War II, and in 2020 when the season was disrupted due to the COVID-19 pandemic.

Who Are the Notre Dame Fighting Irish’s Biggest Rivals?

Due to Notre Dame’s historic success, they’ve generated rivalries with a handful of teams in college football. The USC Trojans are the Fighting Irish’s primary rival. However, Notre Dame also have rivalries against the Navy Midshipmen, the Michigan Wolverines and the Michigan State Spartans.

Who are the USC Trojans’ Biggest Rivals?

The USC Trojans have two core rivals: the UCLA Bruins and the Notre Dame Fighting Irish. The Trojans’ rivalries are so intense, their local media coined the phrase “Perfect Day,” a day in which USC wins while both UCLA and Notre Dame lose. In the 101-year period between 1921 and 2022, there have been 63 “Perfect Days”. USC also has a geographically based rivalry with Stanford.

Regarded as one of the most intense rivalries in all of college football, Notre Dame and USC have played 92 times between 1926 and 2022, with the Fighting Irish leading the overall series 48-36-5. Notre Dame also has the longest win streak with 11 from 1983–1993. In the last 100 years, both Notre Dame and USC have had wildly successful programs, combining for 24 national championships, 14 Heisman Trophy winners, 184 consensus All-Americans, and 89 College Football Hall of Famers.

Notre Dame won 13-12 in the first annual game. A year later, the Fighting Irish played the Trojans for the first time at Soldier Field in Chicago. Notre Dame also won that game by a single point, 7-6. The most famous game in recent memory came in 2005, a game dubbed “The Bush Push,” where USC bested Notre Dame 34-31. Controversy struck when the reigning national champion Trojans were driving down the field to score the game-winning touchdown. With 7 seconds left, USC ran a quarterback sneak at the one-yard line. Heisman Trophy-winning quarterback Matt Leinart was initially short on his first push, but Trojans running back Reggie Bush pushed Leinart for a second effort into the end zone for the touchdown. The rulebook at the time prohibited such an action, but USC was awarded the touchdown anyway.

The winner of the Notre Dame and USC game is awarded The Jeweled Shillelagh, a trophy made out of an oak or blackthorn sapling from Ireland turned into a club and engraved with the phrase, “From the Emerald Isle.” The trophy was first introduced in 1952. For each win, a jeweled ornament is added to the club, a ruby-studded Trojan head for a USC win and an emerald-studded shamrock for Notre Dame.

Where Do the Notre Dame Fighting Irish and USC Trojans Play?

The USC Trojans play at the Los Angeles Memorial Coliseum, one of the most famous venues in the United States. The LA Coliseum has hosted the 1984 Olympic opening ceremonies, Rose Bowl championships and other College Football Championship games. In 2024, the Coliseum will celebrate its 100th year anniversary.

College Football Playoffs Explained: What You Need to Know

For some, the new year is a time for resolutions, celebration and family. For most, it is a time for College Football Playoffs. Four teams will compete for t...

Neyland Stadium has been home of the Tennessee Volunteers for more than a century. Nestled comfortably between the campus' iconic Ayers Hall at the top of Th...