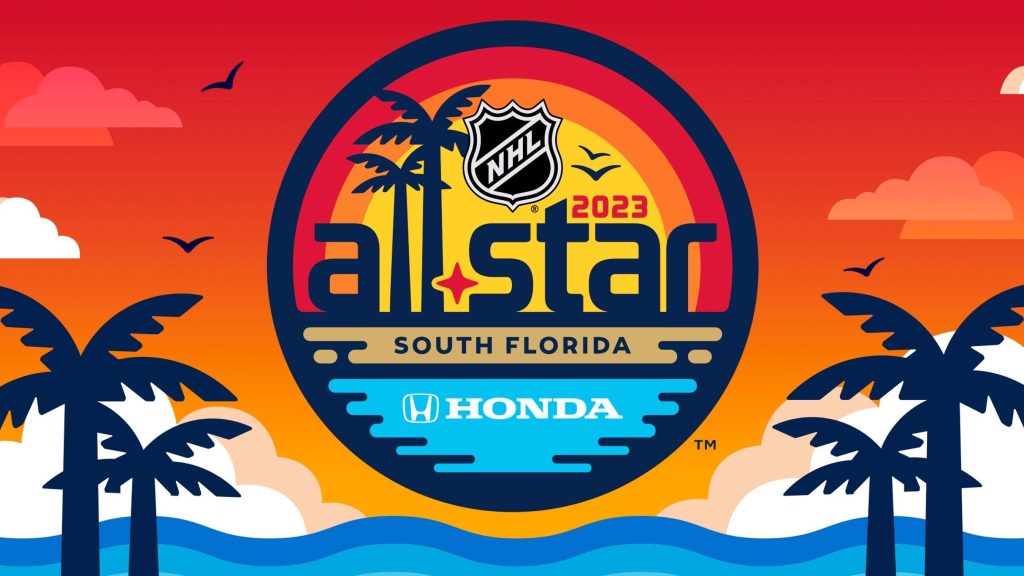 The NHL® announced that the 2023 Honda NHL® All-Star Weekend will be hosted in sunny South Florida at FLA Live Arena, home of the 2022 Presidents’ Trophy winners, the Florida Panthers®. The two-night event will feature an All-Star Skills competition on night one, and the All-Star game on night two.

For the newly implemented skills competition, players from each division will square off against their peers in competition-style games such as Bridgestone NHL® Fastest Skater, Bud Light NHL® Save Streak, Honda NHL® Accuracy Shooting, Enterprise NHL® Hardest Shot, Gatorade NHL® Shooting Stars, and Elite Women’s 3-on-3 presented by adidas.

Additionally, the format of the NHL® All-Star game differs from a traditional NHL® hockey game. In the All-Star game, All-Star teams are divided by division for a total of four teams: Atlantic, Metropolitan, Pacific, and Central. In the semi-finals, the teams play three-on-three for two 10-minute halves. The two winners of each semi-final will square off in an All-Star championship. If any game results in a tie at the end of regulation, the two teams will compete in a three-round shootout to determine a winner.

The 2023 Honda NHL® All-Star Weekend is a two-night event that takes place on February 3 and 4, 2023 at the midpoint of the NHL® season. Night one is the All-Star Skills competition and night two is the All-Star game.

Where is the 2023 Honda NHL® All-Star Weekend Taking Place?

The 2023 Honda NHL® All-Star Weekend will be played at FLA Live Arena in Sunrise, Florida, home of the Florida Panthers®. This is the second time South Florida has hosted All-Star Weekend, with the first coming in 2003.

What is There to Do at the 2023 Honda NHL® All-Star Weekend?

South Florida is a vibrant scene and diverse region with nearly 17 million visitors annually. Tourists can hit the beaches of Ft. Lauderdale, catch local live shows, explore the distinct culinary scene, or attend the variety of entertainment events set up by the NHL®.

The first official NHL® All-Star game was held during the 1947–48 hockey season. However, for the first 19 official games, they were played at the beginning of the season. In 1948, the NHL® elected to move the game to its current format at the midpoint of the season. The NHL® has tinkered with the format on a consistent basis, even electing to not have the event for a number of years, including from 1979–1987, when it was replaced by the Challenge Cup. All-Star Weekend also did not happen during the lockout seasons of 1995, 2005 and 2013, and during years when the Winter Olympics took place (2006, 2010 and 2014).

The league adopted its current format in 2016 for the game hosted at Bridgestone Arena in Nashville, Tennessee. The weekend featured a number of country music acts and outside festivities to attract a wider audience. That game was also unique because league journeyman and enforcer John Scott was voted into the game by fans, despite not being on an NHL® roster. He was elected captain of the Pacific Division, scored two goals and was named game MVP.

NHL, the NHL Shield and the Stanley Cup are registered trademarks of the National Hockey League. NHL and NHL team marks are the property of the NHL and its teams. © NHL 2023. All Rights Reserved.