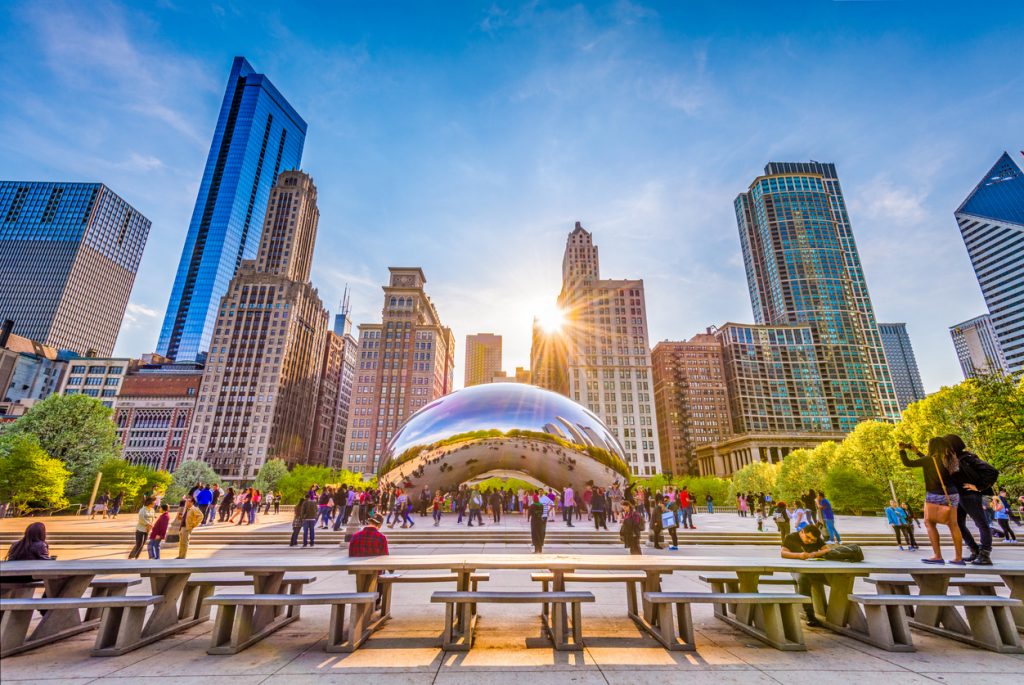 On the weekend of February 14-16, the NBA‘s best players will converge on Chicago for the 2020 All-Star Game Weekend. The league’s annual talent showcase has been held twice before in Chicago — once in 1973 and again in 1988, both times at the Chicago Stadium. This year marks the first time the All-Star Game is being hosted at the current home of the Chicago Bulls, the United Center.

A side-by-side view in 1994 of the United Center and the Chicago Stadium. #UnitedCenter25

If you’re going to the game or any of the pre-game events — or just heading to Chicago to soak up the excitement — here are some all-star suggestions for places to explore while you’re there.

On November 1, 1994, the Michael Jordan statue was unveiled before a national television audience by Larry King, Bulls Chairman Jerry Reinsdorf and Michael Jordan himself in a ceremony at which the famous No. 23 was retired. It sits on a 5-foot high black granite base inscribed with Jordan's basketball achievements and the words, "The best there ever was. The best there ever will be." The statue itself measures 12 feet tall (17 feet from top to bottom) and weighs 2,000 pounds. Though it was once outdoors, the statue remains in the same spot it was unveiled in, but it is now inside of our new 190.000 sq. ft. atrium that opened in 2017! #UnitedCenter25

A basketball matchup as massive as Team LeBron versus Team Giannis deserves a huge platform. Luckily, the United Center is the ideal spot for this showcase of talent: Opened in 1994, the Near West Side venue encompasses almost a million square feet, making it the largest arena in the U.S. In addition to being the home of the Chicago Bulls, the United Center is also home to one of the NHL‘s most storied franchises, the Blackhawks. In a nod to the Windy City’s rich sports history, the arena grounds have statues of Bulls basketball legend Michael Jordan, as well as hockey greats Bobby Hull and Stan Mikita.

The Best Food for Your Chicago Getaway

The United Center itself offers an impressive array of concessions, including Queenie’s Supper Club, which boasts a mouthwatering menu driven by steak, seafood, wine and cocktails. However, there is no shortage of delicious food options near the All-Star festivities, meaning you have plenty of places to fuel up before (or after) events.

Why should pizza get all the attention? Stop by Billy Goat for a Chicago-style borger! #cheezborger #billygoattavern

Head directly east from the United Center and you’ll land at the laid-back Billy Goat Tavern. The world-famous eatery stays open late to serve up sandwiches and burgers — and, on weekends, whips up classic diner breakfast until 11 a.m. At any hour, be sure to order their famous signature sammy the “cheezborger” — a cheeseburger on a Kaiser roll with ketchup, mustard, relish, onions, kosher dill pickle chips and (if you prefer) multiple meat patties — for maximum Chicago-style flavor.

This Friday we’ll be joining breweries across North America and raising money to help the Australian bushfire relief efforts as part of the Beer for Bushfire Relief. We will be tapping Allen’s Lollies infused sour with 100% of proceeds going to the Australian Red Cross, the World Wildlife Fund, and Wildlife Victoria. Stop by for a pint and help us raise a glass as part of #beersforbushfirerelief

North of the United Center is a neighborhood teeming with craft beer emporiums, including the Great Central Brewing Company, Finch Beer Co. and — since 1995 — the Goose Island Beer Company. Relax in their taproom and fuel up with a pint (or two) of the venerable brewer’s classic standbys or unique, inventive suds.

A post shared by Showroom Foodhall Chicago (@showroomfoodhallchi) on Feb 11, 2020 at 9:30am PST

Spending Valentine’s Day evening at the All-Star Celebrity Game at Wintrust Arena? Head a block away from the near South Side venue and you’ll find the Showroom Food Hall. Grab a bite to eat at one of the casual food eateries (Winged Warrior Pizza, Argosy Tacos & Things, Hot Licks) and wash it down with some java (Revolution Coffee Counter) or a brew or two from Nomad Beer & Wine.

If you’re in search of a place to have drinks and dinner before the Saturday-night dunk and three-point contests, look no further than the Park Tavern. This 10,000-square-foot self-described “urban lodge” is the official bar of the Chicago Blackhawks and is known for its house-smoked meats, hearty pub fare and (awesome bonus!) free shuttles to the United Center.

On Sunday morning, while NBA stars such as Kawhi Leonard and Joel Embiid are packing in the protein they’ll need to bring their A-game, check out a venerable Chicago institution with a huge menu full of deli and breakfast foods galore.

The Best Experiences in Chicago

February temperatures in Chicago might not necessarily be conducive to much extended outdoor time, although hearty Midwesterners tend to bundle up and face the wind.

Get in the All-Star spirit and visit us for all things basketball 🏀! Come check out games, exhibits, and memorabilia, including the hoop and backboard from Michael Jordan’s last game as a Chicago Bull.

A post shared by Chicago Sports Museum (@chicagosportsmuseum) on Feb 7, 2020 at 1:53pm PST

What better way to celebrate the All-Star Game than to immerse yourself in a museum completely dedicated to Chicago’s awe-inspiring sports history? (Note: The museum is closed for a private event on Friday February 14 and the Hall of Legends exhibit is closed most of Saturday — but Sunday is fair game and wide open for a visit.)

No trip to Chicago is complete without a visit to — and photograph in front of — the Bean. Located in AT&T Plaza, on top of the Park Grill, the silvery sculpture, whose proper name is actually Cloud Gate, distorts reflections in delightful, whimsical ways.

Twin Peaks month is almost here! Sundays in Feb we’re showing the first season of #TwinPeaks as well as #FireWalkWithMe. But any day you can grab a glass of @kyle_maclachlan’s #PursuedByBearWine Blushing Bear Rosé 2018 or a shot of Cherry Pie ! 🍒 🥧

Talk about an epic pre-game: On Saturday, Lincoln Park rock ‘n’ roll staple Delilah’s is hosting its 22nd annual Vintage Beer Festival. Twenty dollars nets you twenty sample tickets to taste the wares of breweries not just from within the region but from around the world.

One of the country’s best aquariums is located right on Chicago’s lakefront. Say hi to some sea otters, penguins, sharks and turtles at the museum — before cheering on reps from the Raptors and Pelicans at the All-Star Game.